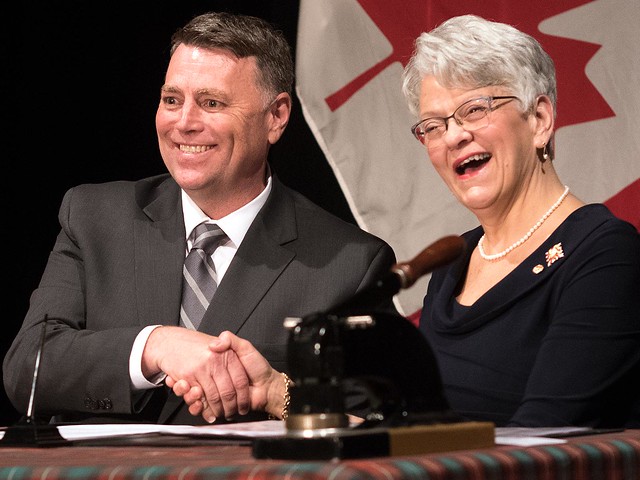 Premier Dennis King was sworn in with his Cabinet in Georgetown, PEI, in May 2019.

Dennis King was the third of eight children born to Catherine (Cattie) Rachel Stevens and Lionel MacKenzie King. He has three brothers and four sisters. King grew up in the Kings County township of Georgetown Royalty. His father, who died in 1996, was a labourer who worked in a shipyard, hauled garbage and sold seaweed by the truckload. Dennis King graduated from Montague Regional High School in 1990.

Dennis King’s first full-time job was as a reporter for the Eastern Graphic, a weekly newspaper based in Montague and owned by Island Press Limited. He was editor of the same company’s biweekly publication, Island Farmer. He also edited Atlantic Fish Farming, a trade publication. King was a news reporter for one year with radio station CFCY. He later became a regular on a CBC Radio political panel with publisher Paul MacNeill and others. King also did livestream play-by-play for the Panthers, the men’s hockey team of the University of Prince Edward Island.

After Pat Binns of the Progressive Conservatives won the 1996 provincial election, Dennis King was hired as a communications officer for the transportation and public works department. He later held a similar post in the department of development and technology. King eventually became an executive assistant and communications director for the premier, a job that ended with Binns’ defeat in the election of 28 May 2007.

In July 2007,  King became director of communications and business development for the Mi’kmaq Confederacy of PEI. Six years later, he formed King Strategy Group, a marketing and public relations consultancy. Before taking a leave to enter politics, he served as executive director of the PEI Seafood Processors Association, a nonprofit organization promoting the island’s third-largest industry.

Dennis King made his stage debut as a storyteller at the Festival of Small Halls in 2014 and then became a founding member of The Four Tellers with David Weale, Gary Evans and Alan Buchanan. The quartet’s performances made them one of the most popular acts on the island.

King has self-published two books of humorous short stories, The Day They Shot Reveen (2016) and The Legend of Bubby Stevens (2017).

In September 2018, James Aylward resigned as leader of the Progressive Conservative party of PEI after less than a year in the post. During his tenure, the party lagged in third place in the polls behind the governing Liberals and upstart Greens.

Dennis King was the second of five candidates to enter the PC leadership race. He launched his campaign at the Kings Playhouse in his hometown with a call for collaboration: “We’re too small as a province to focus only on what divides us.” King won on the second count on 9 February 2019.

Dennis King had been leader of the Progressive Conservative party for less than seven weeks when Liberal Premier Wade MacLauchlan called an election on 26 March 2019. It was the first three-party race in island history; the Green Party was popular among polled voters and posed a strong challenge to the traditional ruling parties, the Liberals and PCs.

With the slogan, “It’s about people,” the PCs campaigned on a platform of $15 million in tax cuts to “put money back in the hands of Islanders.” The party also promised community-based preschool programs as part of a series of policies dedicated to the well-being of children. Other promises included the creation of a new land bank to assist the farming industry, the creation of a dedicated fisheries ministry and the introduction of beer and wine sales in convenience stores. At the start of the campaign, King said that if his party won and broke its promises, “kick us the hell out because we don’t deserve to be there.” King was in favour of mixed-member proportional representation, which was the subject of a referendum held concurrently with the election.

On 23 April 2019, the PCs won 12 seats, two short of a majority. King won his riding in Brackley-Hunter River. The Greens under Peter Bevan-Baker took eight seats, while the governing Liberals were reduced to six with the premier losing his riding. Notably, the Conservatives didn’t win any seats in the province’s two cities of Charlottetown and Summerside. The party also had fewer female candidates (only 26 percent) than either the Greens or Liberals and elected only one woman to the legislature. (Voting in the Charlottetown-Hillsborough Park riding was suspended following the drowning death of Green candidate Josh Underhay and his young son in a canoeing accident just prior to the election.)

On 15 July 2019, PC candidate Natalie Jameson won the deferred election in the Charlottetown-Hillsborough Park riding. Her victory brought the party’s total to 13 seats in the legislature. Jameson became the second woman in the PC caucus and the only member of the party elected in a city riding.

Before being sworn in as premier, Dennis King mused about the possibility of including members of other parties in his cabinet. In the end, he named an all-Conservative, eight-member cabinet. In addition to his responsibilities as premier, King is minister of intergovernmental affairs, Indigenous relations and Acadian and francophone affairs.

Dennis King married Jana Hemphill in 1999. They celebrated their 20th anniversary the day after the 2019 election. Hemphill is a PEI-born writer and journalist who now owns and operates Storybook Adventures, a 24-acre farm that offers horse-riding lessons and boarding facilities. The farm in Brookfield is also home to cows, sheep, chickens, llamas, donkeys and other animals. Hemphill is also director of the registered charity Sadie’s Place, which aids unwanted and neglected horses.