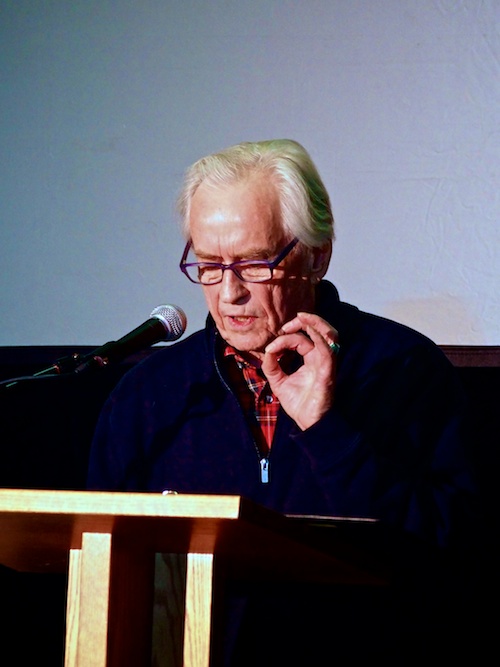 David McFadden began writing and publishing poetry while he was still in high school; he even corresponded with American beat novelist Jack Kerouac. Remaining in Hamilton, the working-class city of his childhood, he lived on “Hamilton Mountain” at the edge of the great Niagara Escarpment, a formation of the Canadian Shield that takes on mythic proportions in McFadden’s writing. McFadden did not go to university but joined the Hamilton Spectator as a proofreader in the early 1960s, later becoming a reporter, chiefly on the police beat. By night a wage earner supporting a budding family and by day an artist, McFadden wrote poems that balanced an account of the daily life of ordinary people with a larger, metaphysical vision influenced by British Romantic poets like William Blake, William Wordsworth, Percy Bysshe Shelley and 19th-century American poet Walt Whitman. He even found time to create, and then disband, his own literary magazine, Mountain. Following publication of his first six poetry collections — and the experimental novel The Great Canadian Sonnet (1974), with illustrations by Greg Curnoe — McFadden left the Hamilton Spectator in 1976 to begin freelance editing and writing. He variously served as contributing editor for SwiftCurrent, Canadian Art, Quill and Quire and Hamilton This Month. He became writer-in-residence at Simon Fraser University in 1978 and instructor in the writing program of David Thompson University Centre in Nelson, BC, from 1979 to 1982.

From his early books, such as The Poem Poem (1967) and Letters from the Earth to the Earth (1968), McFadden was interested in writing concretely about his immediate, quotidian surroundings, such as the corner stores and buses and bowling alleys of Hamilton. “You would see him bobbing proudly down Kenilworth Avenue / dressed in ill-fitting pin-striped suit & flowery tie / bought in a second-hand store, / his right hand bent in perpetual wave, two paper bags in his left hand.” But as his work evolved through the 1970s, his range of concerns extended across the Great Lakes region to all of Canada and, eventually, to the world.

McFadden’s work received increasing recognition throughout the 1980s, with The Art of Darkness (1984) and the cycle of prose poems Gypsy Guitar (1987), both nominated for the Governor General’s Award. By the 1990s, with books like There’ll Be Another (1995), McFadden’s work attained a higher degree of global engagement while never losing its plainspoken, vernacular style. In his moving elegy to his friend and collaborator Greg Curnoe, “The Death of Greg Curnoe,” in There’ll Be Another, he writes about being in Havana, Cuba, about the clubs and billboards and painters there, but also more intimately about Curnoe himself and the significance of his life: “without embarrassment here is a death / worth considering worth paying attention to / here is a death to ponder deeply the drastic / end of a life to be inspired by forever.” In 2007, Why Are You So Sad? Selected Poems of David W. McFadden was shortlisted for the Griffin Poetry Prize, and in 2013 What’s the Score? won that same prize, bringing the work of a very private poet broad attention in Canada.

A year, almost to the day, after receiving the Griffin Poetry Prize, David McFadden published a short memoir in Toronto Life about being diagnosed with Alzheimer’s disease. Among the gradually accumulating effects of the disease, due to among other things a progressive atrophying in the temporal cortex, was a loss of vocabulary, a troubling issue for someone who devoted his life to poetry. “What is it like to be me, a poet without words, a poet who can’t speak?” he wrote. “Often I have no way of telling anyone how I feel, and sometimes I find myself unable to understand the normal speech of other people. I think of a word, then I stop thinking of it, then I can’t remember it. I get a brilliant idea, and then it’s gone, instantly.” Paradoxically, despite the fact that his illness impacted his ability to speak, remember, and perhaps most importantly access his vocabulary, he retained his ability to write fluently and continued to be prolific. In addition to What’s the Score?, in 2013 he published a memoir of travelling with his father (Mother Died Last Summer ), in 2014 a book of tankas and haiku (Shouting Your Name Well: Tankas and Haiku), and in 2015 a sequence of 102 sonnets (Abnormal Brain Sonnets).