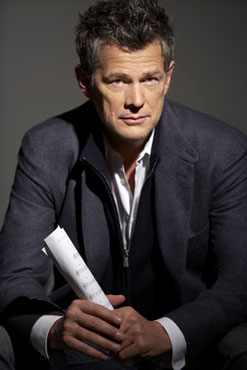 Foster's multifaceted career has made him one of the most influential international figures in popular music (photo courtesy davidfoster.com).

David Foster grew up in Victoria, British Columbia, with six sisters. His father was an occasional amateur church organist. Foster began playing piano at age four with teacher Catherine Dash, and it was soon discovered that he had perfect pitch. He learned to play other instruments from high school music teacher Bob Bergeson. In his teens, Foster formed a dance band and attended the University of Washington’s summer music program on scholarship. While still in his teens in the mid-1960s, he moved to London, England, as the keyboard player for a Victoria rock band, the Strangers. There they became the backup band for Chuck Berry and for Bo Diddley (Foster’s first experience with rock ’n’ roll). At this time, Foster came under the lasting musical influence of The Beatles.

Foster lived in Edmonton in 1969 and was mentored by Tommy Banks. He then lived briefly in Toronto, where he played for Ronnie Hawkins before returning to Vancouver to form the band Skylark with vocalist B.J. Cook and guitarist Doug Edwards. The band’s “Wildflower” was a Top 10 hit in Canada and the United States in 1972. In 1971, Foster went to Los Angeles with Skylark and remained there following the group’s demise in 1973. He worked initially as a studio musician (for Michael Jackson, George Harrison, Rod Stewart and Barbra Streisand, among others) and an audition pianist. He was also the pianist for the stage version of The Rocky Horror Picture Show at Los Angeles’ Roxy Theatre and played with the band Airplay.

In 1979, Foster undertook a career as a record producer. He quickly became known for taking a hands-on role in the studio, often co-writing or arranging material. The first of Foster’s dozens of hit records as a producer and/or songwriter was the Earth, Wind & Fire smash hit “After the Love Is Gone” (1979). Some of the No. 1 hits he produced include “I Swear,” “Un-break My Heart,” “The Power of Love” and “Glory of Love” (co-written with Peter Cetera), Natalie Cole’s “Unforgettable,” Whitney Houston’s “I Will Always Love You” and Céline Dion’s “Because You Loved Me.”

In 1985, while living briefly again in Vancouver, he co-wrote and produced the hugely successful charity single “Tears Are Not Enough.” Other great successes for Foster as producer and/or writer during the 1980s and 1990s included Chicago’s “Hard to Say I’m Sorry,” “Hard Habit to Break,” and “You’re the Inspiration,” John Parr’s “St Elmo’s Fire (Man in Motion)” and Olivia Newton-John’s “Twist of Fate,” all Top 5 hits on Billboard charts. These songs established Foster’s trademark, heavily produced middle-of-the-road (MOR) sound, which was tailor-made for mainstream pop radio.

Foster also won Juno Awards as Producer of the Year in 1985 for Chicago 17 and in 1986 for the soundtrack of St Elmo's Fire. In total, he has received more than 20 Juno nominations. He shared the 1986 Canadian Country Music Association Songwriter(s) of the Year award with Charles Goodrum and Jim Vallance for the Anne Murray hit “Now and Forever.”

Foster’s domination of pop music sales continued beyond the 1990s, with several additional Grammys for record and album of the year and as producer and arranger: in 1991 for Unforgettable, sung by Natalie Cole; in 1993 for the soundtrack for The Bodyguard; in 1993 and 1996 for recordings by Dion and Cole. Further Grammys came in 2007 and 2010 for Best Traditional Pop Vocal Album (both recorded by Michael Bublé). Foster has also contributed songwriting for the Broadway musicals Hot Feet (2006) and The Boy from Oz (2003–04). In 2006, he appeared on American Idol as a mentor (see also Canadian Idol).

Foster has attributed his success to his personal motto, “Compromise breeds mediocrity,” which he applies rigorously to his work in the studio. Although he happily admits to preferring middle-of-the-road adult-contemporary pop music, he is versatile across varied genres, having engineered significant commercial successes with R & B, country, jazz, theatre, film and crossover classical recordings.

In addition to producing albums, Foster wrote the score for such films as St. Elmo’s Fire (1985), The Secret of My Success (1987) starring Michael J. Fox, Stealing Home (1988) and One Good Cop (1991). He also contributed songs to such movies as Urban Cowboy (1980), Night Shift (1982) and Ghostbusters (1984). He received Academy Award nominations for songs he wrote for The Karate Kid Part II (1986), The Bodyguard (1992), and Quest for Camelot (1998), for which he won a Golden Globe. He has also been nominated for five Emmy Awards, winning in  2003 for The Concert for World Children’s Day (2002), and earned a Gemini Award nomination for best original score for the Kate Nelligan mini-series Golden Fiddles (1991).

Foster has hosted variety specials on CBC and CTV, including The Symphony Sessions (with the Vancouver Symphony Orchestra) in 1988. In 2008, he produced his first PBS TV special, Hit Man: David Foster and Friends, featuring performances by such collaborators as Josh Groban, Michael Bublé and Andrea Bocelli. He has made annual David Foster and Friends performance tours in Asia, and in 2013 was music director and piano accompanist for an Andrea Bocelli television special. He has also played piano for Bocelli and Ruben Studdard on popular US television shows such as The View to promote their recordings.

In 1994, Foster became vice-president of Atlantic Records (part of the Warner Music Group). It was in this position that he signed Irish supergroup The Corrs and guided them to multi-platinum success. He also produced All-4-One’s international No. 1 hit song “I Swear.” Soon after, he formed the production company 143 Records. In 1997, he was appointed senior vice-president of Warner Music Group. In these positions he launched the careers of several young singers of pop ballads, most notably Josh Groban and Michael Bublé.

Foster was named chairman of the jazz label Verve Music Group in 2012. In this capacity, he signed established singers and international newcomers and expanded the label’s focus to include a mix of pop and crossover classical albums. Artists on the Verve label under Foster included Diana Krall, Sarah McLachlan, Andrea Bocelli and Ruben Studdard.

Although Foster was a keyboardist in bands and as a studio session musician, his first experience performing live as a soloist was as a guest artist at a Kenny Loggins concert at the Santa Barbara Bowl in 1985. Foster went on to perform his own occasional concerts and recordings, appearing in concert at Expo 86 and playing with the Vancouver Symphony Orchestra (VSO) and the Toronto Symphony Orchestra (TSO), among others.

Under his own name, Foster has recorded several albums of instrumentals and songs: The Best of Me (1982), David Foster (1986), The Symphony Sessions (1987) and River of Love (1990). A vocal duet with Olivia Newton-John, “The Best of Me,” was popular in 1986. He won the Juno Award for Instrumental Artist of the Year in 1986, 1987 and 1989. His rousing “Winter Games,” the theme of the 1988 Olympic Winter Games in Calgary (the first of several times he wrote music for the Olympics), was a Canadian hit in 1988. David Foster: Rechordings (1991) featured Foster performing his hits. His Christmas album was certified gold in Canada in 1993.

“The Prayer,” a song he co-wrote for the soundtrack of Quest for Camelot (which he also produced) won a Golden Globe for Best Original Song – Motion Picture in 1999. In 2001, he appeared again with the VSO to record his own arrangements of “ O Canada” (2001, Warner Music), which reached No. 3 on the Billboard Canadian charts.

Foster was married to singer and Skylark co-member B.J. Cook from 1972 to 1981. They had one child together.  He was then married to Rebecca Dyer from 1982 to 1986 and had three children with her. He wed his songwriting partner Linda Thompson in 1991. They divorced in 2005.  He was then married to actor and model Yolanda Hadid from 2011 to 2017.  In July 2018, Foster announced that he was engaged to singer and actor Katharine McPhee, 34 years his junior.  Foster and McPhee met in 2006 when she was a contestant on American Idol and Foster served as a mentor.

Foster’s private life was made public on the Fox reality show The Princes of Malibu (2005). His daughter Amy Foster-Gillies is also an award-winning songwriter.

David Foster formed a charitable foundation in British Columbia for children in need of medical transplants. He has hosted, produced or directed numerous benefit concerts including annual concerts for tennis star Andre Agassi. The David Foster Foundation Theatre at Oak Bay Beach Hotel in Victoria opened in 2013. He received the Humanitarian Award for his charitable efforts at the 2019 Juno Awards.

David Foster’s influence on pop music and songwriters in North America and abroad has been acknowledged by major music industry associations. He was named Billboard’s top singles producer and R&B producer in 1993, and was inducted into the Canadian Music Hall of Fame in 1998 and the Canadian Music Industry Hall of Fame in 2007. He was named a BMI Icon in 2011 and has been BMI’s Pop Songwriter of the Year three times. In May 2008, a tribute concert was held at Mandalay Bay, Las Vegas, and televised later that year.

Foster was inducted into the Order of British Columbia in 1995. He won a 2003 Emmy Award with his wife at that time, the lyricist Linda Thompson, for The Concert for World Children's Day. Also in 2003, he was honoured with Hollywood’s Outstanding Achievement in Songwriting Award. He was appointed an Officer of the Order of Canada in 2003, and inducted into the US Songwriters Hall of Fame in 2010. In 2012, the City of Victoria honoured him by naming its harbour pathway David Foster Way.

David Foster ranks among the most commercially successful and influential pop-music producers of all time. He has successfully maintained that status even as the public’s tastes and pop-music styles have changed. The great commercial success of his music has earned him the nickname “the Hit Man.” A 1995 Time magazine article called Foster “the real king of pop,” while a Rolling Stone piece in 1985 called him the “master of bombastic pop kitsch.” Trademarks of Foster’s so-called “power ballads” are singable melodies, layered strings, electric piano, orchestral crescendos and a detailed production style.