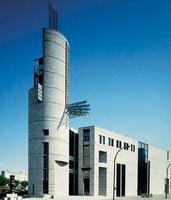 Pointe-à-Callière in Old Montréal. Completed in 1992 the building successfully combines the architect Daniel Hanganu's refined industrial aesthetic with a sensitivity to the site's historical and cultural context (courtesy Musée Pointe-à-Callière). 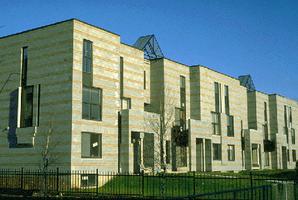 Daniel Sergiu Hanganu, ​OC, ​ONQ, architect (born 27 January 1939 in Isia, Romania; died 5 October 2017 in Montréal, QC). Daniel Hanganu completed a degree in architecture at the University of Bucharest (1961) and worked in Romania for several years following graduation. Rather than join the Communist Party, Hanganu immigrated to Paris in 1970, studying at the École des Beaux-Arts before moving to Toronto that year and working briefly for Victor PRUS. He worked for Dimitri Dimakopoulos before forming a partnership with Eva VECSEI that lasted until he opened his own firm with a commission to design housing on Montréal's Nuns' Island.

Housing quickly became the focus of Hanganu's early career. An early project, the Habitations Rue de Gaspé, received an award from the Quebec Order of Architects in 1981, and from then until 1991 Hanganu received 10 more awards for his work in housing. Through the 1980s Hanganu primarily designed single and multifamily housing units in and around Montréal, which quickly caught the attention of noted critics like Kenneth Frampton of Columbia University in New York. These residential buildings show the development of Hanganu's personal architectural style, rooted in the traditions of modern architecture but distinguished by innovative uses of construction materials and a tightly integrated sense of design. His Val de l'Anse condominium block (1984-85) on Nuns' Island won him the first of many Prix d'excellence awards from the Quebec Order of Architects.

In 1987 he turned to larger projects, beginning with the Chaussegros-de-Léry office/condominium complex (with Provencher Roy Architects), which was constructed next to Montréal's City Hall. Hanganu withdrew from this project during its third phase, however, due to a dispute with the developer over the condominium block.

Daniel Hanganu's first building to attract national acclaim was the Museum of Archaeology and History (again with Provencher Roy et Associés) at Pointe-à-Callière in Old Montréal. Completed in 1992 for the 350th anniversary of the city's founding, the building successfully combined the architect's refined industrial aesthetic with a sensitivity to the site's historical and cultural context. The museum earned him the Governor General's Award for Architecture medal of excellence in 1994.

An increasing concern with the effects of interior light and space is evident in Hanganu's work completed since the mid-1990s, particularly in the Abbey Church for the Benedictine monastery at ST-BENOÎT-DU-LAC, Québec (1989-94), and the Design Pavillion for the Université du Québec à Montréal (1992-96). Equally impressive are the forms, views and details inside the $100-million École des Hautes Études Commerciale, built for the Université de Montréal (1992-96, with Jodoin Lamarre Pratte et Associés), although the building has drawn criticism for its monolithic size and over-scaled exterior detailing.

In 1998 Hanganu (with Provencher Roy et Associés) won a competition to recycle the previous École des Hautes Études Commerciale (HEC) building in Montréal into the regional centre of the Archives Nationales du Québec. Inaugurated in the spring of 2000, the new complex is remarkable for its seamless integration of old and new architecture. Retaining most of the buildings on the city block site, including the beaux-arts style HEC building (constructed 1908-10) and the Jodoin residence (constructed 1870), Hanganu created within them a functional and aesthetically pleasing array of interior spaces using modern and traditional materials and abundant natural light in the public areas. The design received accolades from preservationist groups and earned the architect yet another Prix d'excellence from the Quebec Order of Architects.

Common visual elements link Hanganu's designs. Chief among them is a strong interest in what he has termed "the natural behaviour of building materials." His early training in Romania, particularly with architect Nicolae Porumbescu, acquainted him with a detailed knowledge of building techniques and construction materials. He has also remarked that Victor Prus helped further refine his interest in the unique properties of building materials. Projects as diverse as the abbey church of Saint-Benoît-du-Lac and the Cirque du Soleil studio share a common interest in exploring the essential nature of materials and forms.

In general, Hanganu's sensibility may be linked to those of modernist architects, who prefer to use materials in their natural state. This is evident in Hanganu's preference for galvanized steel, corrugated metal columns and chipboard. Due to his sensitivity to light and space, his buildings are often both serene and powerful, despite finishes that can be unrefined and even jarring. Hanganu has stated that this tendency to use common, unadorned and basic construction materials might be related to the movement in art known as arte povera, or poor materials. But the ordinary or everyday, in Hanganu's practice and estimation, needs to be enriched by light, colour and spatial variation.

In a 2008 interview, Hanganu suggested that many of his works - especially the abbey church at St-Benoît-du-Lac and the Museum of Archaeology and History at Pointe-à-Callière - have been informed by what contemporary Italian architect Aldo Rossi terms "'the presence of the past'. They are about architecture as a cultural phenomenon, about history, knowledge of the past, continuity and especially the skillful and humble insertions of 'who we were' into the demanding present, while hoping for a bright future. I think this is the essence of our profession."

In addition to the more than 50 design awards he has received and the Prix Paul-Émile Borduas, given in recognition of the artistic aesthetic of his architecture, Daniel Hanganu has been awarded honorary doctorates from Laval University and the University of Bucharest. He was appointed an officer of the ORDER OF QUEBEC in 2005, and in 2008 received the Royal Architectural Institute of Canada (RAIC) Gold Medal, the highest honour bestowed by the profession of architecture in Canada. In 2009 he was appointed a member of the ORDER OF CANADA.