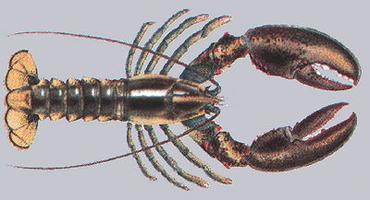 The American lobster is the only species in Canadian waters and is one of Canada's most valuable crustacean resources (artwork by Kendall Morris).

Crustacean, shelled invertebrate with segmented body and limbs at some stage of its life, an exoskeleton and 2 pairs of antennae. The exoskeleton, a protective and supportive framework located outside the body, is periodically molted to allow for growth. Crustaceans, with over 31 300 living species, comprise a subphylum of the phylum Arthropoda. They occupy terrestrial and fresh and saltwater habitats, and range in size from the Japanese spider crab, with a 3.65 m claw-span, to microscopic water fleas. The well-known shrimp, crab and lobster belong to the Malacostraca, one of 8 classes.

Various reductions and fusions notwithstanding, the crustacean body is essentially composed of a head with 5 pairs of appendages, and a trunk with numerous segments and appendages. The Cephalocarida, first discovered near New York (1955), are reminiscent of the primitive crustacean condition: many segments and trunk limbs are very similar, one after another (serial homology).

Diversification and specialization of the appendages has occurred through evolutionary time: the modern crab bears little superficial resemblance to the barnacle or wood louse.

Sexes are separate in some species; others change sexes in midife, are hermaphroditic, or are born pregnant (making males unnecessary most of the time). Many brood their eggs until larvae emerge. Numerous molts follow while the larva is free-swimming. The presence of a rigid exoskeleton necessitates a molting process initiated by hormones, following which the naked crustacean rapidly swells with water. The outer cuticle (tough covering) hardens again while the animal remains in hiding.

Ancestral crustaceans were probably swimmers. Through appendage modification, walking, crawling, burrowing, sessile and parasitic lifestyles have also been adopted. The zooplankton link in the ocean's food chain is composed primarily of tiny crustaceans. Many of Canada's great whales, the fin, grey, sei, blue and humpback, feed almost exclusively on these small animals. Some crustaceans are common pests (eg, terrestrial amphipods in greenhouses, isopods boring into wood and barnacles fouling ships); however, the group makes a major contribution to Canadian fisheries. A brief discussion of the 8 crustacean classes follows.

Cephalocarida, tiny (2-4 mm long), hermaphroditic, shrimplike crustaceans; 9 species and 4 genera are known. Inadequate collection probably accounts for absence of Canadian records. The body consists of a shield-shaped head, elongated thorax and abdomen. The head has 5 pairs of appendages; the thorax, 8 segments, each possessing a similar pair of legs, the last pair reduced or absent; the abdomen, 11 ringlike, limbless body segments (somites) and an anal segment bearing a pair of appendages (uropods). These most primitive living crustaceans inhabit soft, muddy bottoms, silty sands or algal beds and occur in the Atlantic and Pacific oceans between 40° N and S latitudes, usually from intertidal zones to 300 m depths.

Branchiopoda, crustacean class comprising 3 orders: Anostraca (fairy shrimps), Notostraca (tadpole shrimps) and Diplostraca (clam shrimps and water fleas). Branchiopods are nearly all restricted to fresh water. Although most are microscopic, they represent an important element in the planktonic food chain. The name derives from structures on the legs that function as gills; the multiple appendages are used for swimming and filter feeding.

Branchiopods are characteristic of waters that frequently dry or freeze. Many branchiopods are parthenogenetic (males are rare; females are born pregnant). Thus, they can quickly take advantage of the reconstitution of their habitat. Most branchiopods are pale and transparent; hemoglobin in the body gives some a rosy colour.

Ostracoda, seed shrimp, are microscopic, bean-shaped, bivalved crustaceans living at the bottom of fresh or marine bodies of water. Over 2000 living species have been described worldwide; about 150 freshwater species and many more marine forms are known from Canada. Habitats range from temporary pools in semiarid southern Saskatchewan to large lakes and streams transcontinentally, including the Arctic.

Ostracodes molt about 8 times before adulthood; shells lack growth lines. Ostracodes serve as food for bottom-dwelling fish. They are important indicators of habitat changes. Their fossil record is continuous and contains the largest number of fossil species (about 10 000) among crustaceans.

Mystacocarida, a small class of minute crustaceans, usually less than 0.5 mm long. The elongated, cylindrical body is divided into head, bearing 5 pairs of appendages, and 11-segmented trunk. Each of the first 5 trunk segments bears a pair of appendages. The telson possesses a pair of clawlike tail branches. Sexes are separate.

These marine, benthic animals live between fine sand grains in intertidal and subtidal zones of the Atlantic and southwest Indian oceans. There are 10 known species in 2 genera. Inadequate collection probably accounts for the absence of any Canadian records.

Copepoda, small crustaceans, from 0.1-300 mm long (usually 0.5-5.0 mm), some free-living, others parasitic during part of their lives. The body is divided into cephalothorax, bearing up to 11 pairs of appendages, and limbless abdomen. Parasitic copepods may deviate from the basic form. Copepods inhabit all aquatic environments (including the High Arctic), from deep oceans to temporary freshwater ponds, and may be planktonic, benthic or periphytonic (living attached to underwater surfaces).

Some are symbionts with other marine invertebrates. Parasitic species attach themselves externally or internally to fishes, marine mammals and marine invertebrates. About 8000 species are known. In Canada the most common species belong to the following genera: Calanus, Oithona (marine); Diaptomus, Cyclops (freshwater); and Caligus (parasitic).

Branchiura, fish lice, are crustaceans with a depressed body (up to 3 cm long) divided into head, 4-segmented thorax and unsegmented abdomen. A shield-shaped carapace covers head and part of thorax. The head and its 5 pairs of appendages are adapted for locomotion. Each thoracic segment bears a pair of legs modified to form a grasping organ in the male. The reduced, fin-shaped abdomen bears a pair of minute tail branches.

Sexes are separate. Fertilized eggs are laid on hard substrata. Young hatch as modified larvae or juveniles and soon attach to a host. Branchiura are external parasites of marine and freshwater fishes, but frequently leave the host to swim or crawl. About 130 species and 4 genera are known. Ten species of genus Argulus are recorded from Canadian Atlantic and Pacific coastal waters and freshwater lakes.

Cirripedia, a group of crustaceans with over 900 species, including sessile and parasitic forms. They live from intertidal zones to the deep sea. Familiarly known as barnacles, most cirripedes cement themselves to hard surfaces and secrete protective calcareous plates. A goose barnacle has its plates perched on a flexible stalk.

Fine setae (bristles) filter out food particles from water currents generated by leg movements. Parasitic barnacles can be found on organisms ranging from jellyfish to whales. There are at least 20 species of acorn and goose barnacles on the rocks of Canada's West Coast. One species grows to 15 cm.

Ancestral malacostracans lived in the oceans some 200 million years before dinosaurs roamed the earth. Today, they constitute nearly 75% of all crustacean species and include lobsters, crabs, crayfish and shrimp, some of the largest and most economically valuable invertebrate species. Most are still found in the marine environment, although a significant number of species have become established in fresh water, and the pill bugs (wood lice) are a fairly large terrestrial group.

A typical malacostracan has stalked eyes, 19 segments plus a telson (18 according to some experts, who do not consider the antennules to be associated with a true segment), a cylindrical body in which the thorax is partially fused with the head and covered with a carapace, and one or more pairs of anterior thoracic appendages modified for handling food. However, the malacostracans are a diverse group, with as many exceptions to this basic plan as followers of it.

In 2 of the largest orders, the Isopoda and Amphipoda, there is no carapace and the eyes are sessile (immovable) rather than stalked. In the isopods the body is generally flattened from back to belly (dorsoventrally); in the amphipods it is more commonly compressed laterally. Variations on the generalized plan seem limited only by the number of species and the variety of ecological niches occupied.

The various classification systems divide Malacostraca into 10-12 orders, of which only 4 have freshwater representatives in North America. Two-thirds of all malacostracans are in 3 major orders: Isopoda, Amphipoda and Decapoda. The remainder are mainly small, little-known species, but many are important parts of aquatic food chains for economically valuable animals. Mysids (opossum shrimp) are almost exclusively marine, but in the Great Lakes a freshwater mysid occasionally constitutes 80% of the diet of trout.

Another lesser-known group, the pelagic euphausiids (krill) often occur in large numbers in the marine environment; some species form a major part of the diet of large whales. It has been estimated that a blue whale can consume 2-3 t of euphausiids in a single feeding. The euphausiids are also unusual in being bioluminescent, ie, capable of producing their own light from organs (photophores) located at several points on the body.

The order Isopoda includes some 4000 species, most of which are marine and have dorsoventrally flattened bodies, sessile eyes and no carapace. The order also includes parasitic forms, freshwater species and the only large group of terrestrial crustaceans, the pill bugs, sow bugs or wood lice. The name pill bug comes from the animal's tendency to roll into a pill-shaped sphere for protection from physical danger or dehydration. The various species of pill bugs can be found beneath stones, matted vegetation and fallen trees, where they feed on algae, moss, bark and decaying organic matter.

The order Amphipoda comprises about 3600 species, typically with sessile eyes, no carapace and a humpbacked, laterally compressed body. Most are marine but there are a significant number of freshwater species, and even a few that might be considered terrestrial.

Although some live in the ocean depths, amphipods are most common in shallow water and in the intertidal zone, where they are known as sand-hoppers or beach fleas. In the freshwater habitat they serve as transmitters of acanthocephalan parasites (intestinal worms) of ducks, and as an important food for aquatic birds and fish.

The order Decapoda contains 8500 species, including the shrimp, crayfish, crabs and lobsters, and is by far the largest crustacean group. Most decapods are marine, but crayfish, some shrimp and a few other species are found in fresh water. In decapods, the first 3 pairs of thoracic appendages are modified as maxillipeds for the handling of food, leaving 5 pairs as walking legs (hence the name Decapoda, "ten feet").

Decapoda are divided into 2 major groups: the Natantia (swimmers), encompassing the shrimp, and the Reptantia (crawlers), including lobsters, crayfish and crabs. Decapods are among the most interesting invertebrates and, as a group, are certainly the most economically valuable in Canada.