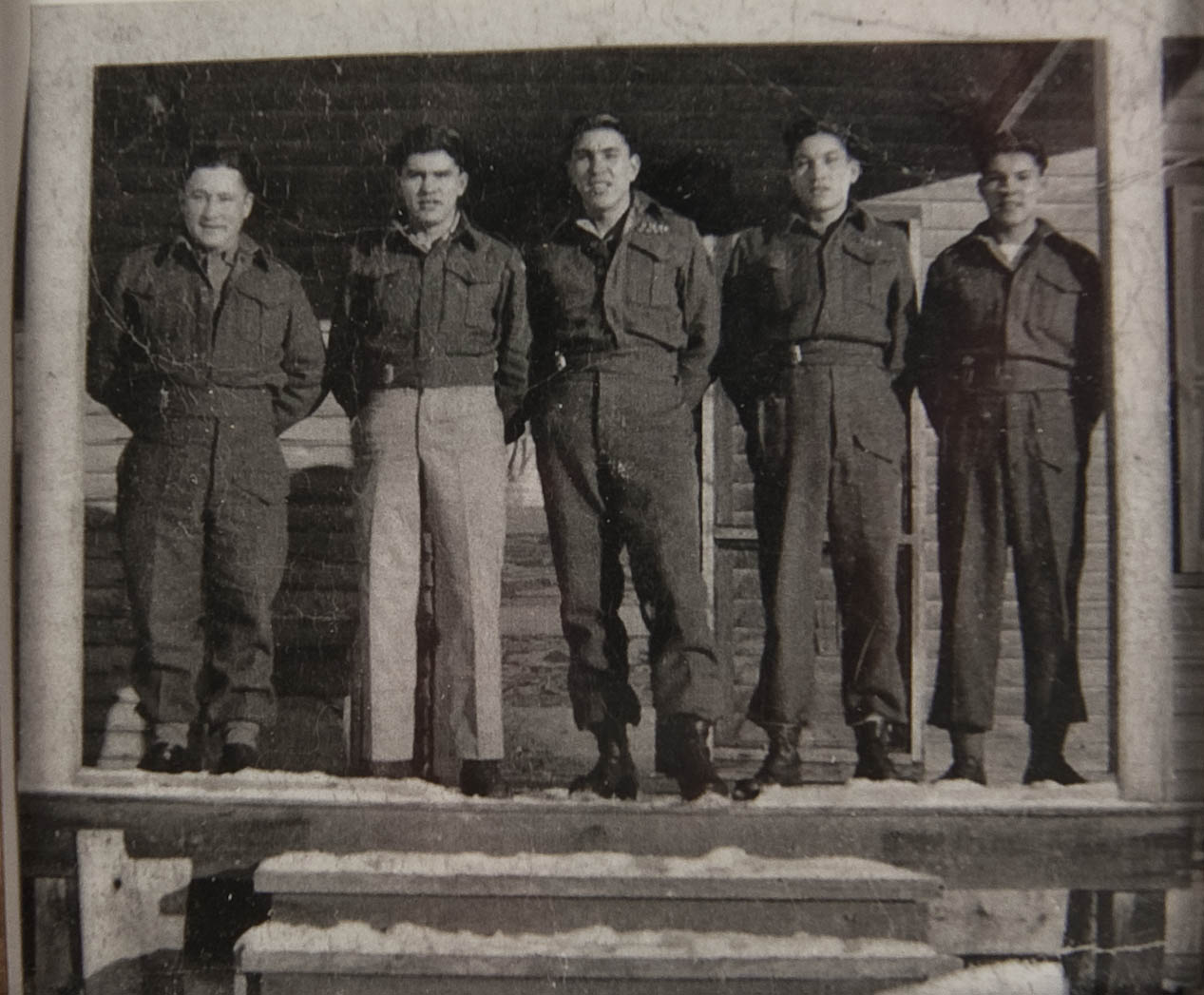 Charles Tomkins served as a Cree code talker during the Second World War. He is pictured here with his brothers (from left to right) in 1945: John Smith, Henry, Peter, Charles and Frank.

Despite the racial discrimination faced by Indigenous people in the armed forces and on the home front, an estimated 4,300 First Nations soldiers and a number of Inuit and Métis peoples in Canada took up arms in the Second World War. When Canada declared war in 1939, Indigenous people volunteered in the thousands. (See also Indigenous Peoples and the World Wars.) Their reasons for doing so were varied. Some cited reasons related to employment opportunities or feelings of patriotism. Others felt that enlistment would enhance Indigenous claims towards full citizenship and legal equity in Canada after the war, as well as a better life on reserves.

Indigenous people who enlisted experienced racially biased recruitment policies, with the majority funneled into the Canadian Army instead of the Royal Canadian Air Force (RCAF) or the Royal Canadian Navy (RCN). Enlistment in the RCAF was only for “British subjects of pure European descent” until 1942, and in the RCN, for those “of pure European descent and of the white race,” until 1943.

The federal government’s mandating of military training and service with the National Resources Mobilization Act (NRMA) of 1940 was met with opposition in Indigenous communities. The NRMA enabled the government to appropriate the property and services of Canadians — including military service — for home defence. Many First Nations maintained that prior treaties and other agreements with the Crown exempted them from compulsory military duty. (See also Conscription.) However, it was not until 1944 that limited exemptions were granted to recruits covered by Treaties 3, 6, 8 and 11, because the signatories of these agreements had been assured that they would not be involved in British wars. (See also Numbered Treaties.)

Indigenous recruits who did serve traveled from Canada to England, where they received their posting. A select group were told that they would go to London on a secret mission. While most believed that they were headed for battle on the western front, they came to realize that their mission was more complex.

According to Charles Tomkins, a former Cree code talker, the Cree were not the only Indigenous people recruited for this mission. Tomkins recollected seeing an estimated 100 Indigenous soldiers assembled by the CMHQ in London, from which Cree, Ojibwe and others were chosen.

While there is no definitive reason as to why Cree speakers were chosen over others, there are a few likely reasons. First, there were large numbers of Cree speakers to draw upon, and their language would have been unintelligible to the Germans. Second, many Navajo code talkers in the American military were serving in the Pacific theatre of war. This may have left a void for speakers of other Indigenous languages to fill in the European theatre of war. The fact that many Cree soldiers were fluent in other languages such as English and French also seems to have been an advantage.

Shirley Anderson, the niece of code talker Charles Tomkins, provided some examples of disguised language in her piece in the Readers Digest (2017): iskotew (“fire”), was the code word for the Spitfire plane, and pakwatastim (“wild horse”), was the word for the Mustang aircraft.


While the Cree code talkers provided invaluable services to the Allied forces during the Second World War, a significant number of them remain unidentified. This is likely because they were sworn to secrecy during the war and uncovering information about them has not been prioritized. In the United States, by contrast, the story of the Navajo code talkers is fairly well known. It was the subject of the action movie Windtalkers (2002), starring Nicolas Cage and Adam Beach.

Some of the Cree code talkers that have been identified by Charles Tomkins include those who served in his immediate circle: Walter McDermott, Peter Tomkins (his brother), John Smith (his half-brother) and Archie Plante (his friend).

Much of what we know today about the Cree code talkers came to light in 2003, when Charles Tomkins was interviewed by the Smithsonian National Museum of the American Indian for an exhibition called Native Words, Native Warriors, that featured the famed Navajo code talkers.

Researchers have accessed declassified Canadian military files regarding the secret mission to which the Cree code talkers were assigned. Although military archives exist and are available, Tomkins may have been the last of his comrades to know anything of this secret operation.

In 2016, two Indigenous filmmakers, Alexandra Lazarowich and Cowboy Smithx, brought to public attention the story of Charles Tomkins for the first time in Canada. Their short documentary, Cree Code Talker, highlights Tomkins’s story, featuring audio footage of his interview with the Smithsonian as well as video footage of two of his brothers talking about Tomkins. 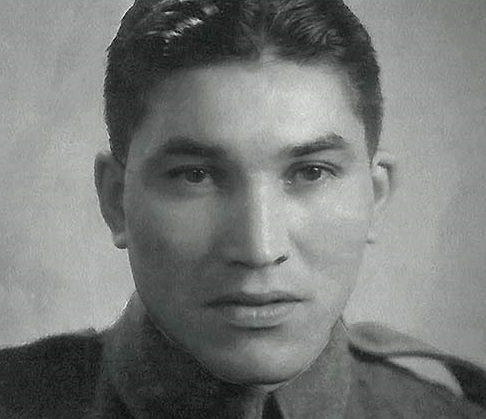