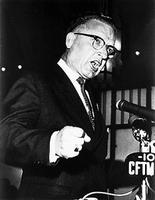 Créditistes, Québec party involved in federal politics. For nearly 2 decades before its 1958 formation into a political party, the Ralliement des Créditistes had operated a mass sociopolitical movement known as the Union des Electeurs. With Réal CAOUETTE as their fiery leader, Créditistes burst upon Canadian politics in the 1962 federal election, capturing 26 seats and 26% of the popular vote in Québec. The Québec wing was then affiliated with the national SOCIAL CREDIT Party. With a handful of western Social Credit MPs, the party held the balance of power in the House of Commons until the federal election of 1963.

Soon after, a majority of its remaining MPs and most of its rank and file supporters split with the national party and formed an independent parliamentary grouping under its own name. The party continued to operate separately as the Ralliement des Créditistes in the federal Parliament until the end of the decade. In 1970 the party entered Québec provincial politics and won 12 seats in the National Assembly, led by a colourful Caouette protégé, Camil Samson. But like the federal party, the provincial party was weakened by internal splits, and it was wiped out in the 1973 provincial sweep of Liberal Premier Robert Bourassa.

In 1971 Caouette reunited the federal party with the national Social Credit Party, and became the national Social Credit leader. Despite his spirited leadership over the next few years, the party experienced a steady decline in popular support. Its parliamentary representation disappeared entirely in 1980, 4 years after Caouette's death. Since that time, the Créditistes have ceased to exist as a distinct political entity in Canada.

The party's ideology reflected the traditional right-of-centre attitudes of Québec's rural and small urban population, and embraced Major C.H. Douglas's monetary reform ideas. In its early years in Parliament, it also supported the expansion of the French language in the federal Parliament and public service, and flirted briefly with the idea of "special status" for Québec. But by the late 1960s, under Caouette's firm policy guidance, it embraced the concepts of official bilingualism and multiculturalism and strongly opposed Québec's independence.

One important legacy of the Créditistes is that it demonstrated that a third party could emerge and alter the traditional two-party system in Québec at both the federal and provincial political levels. In this way it helped pave the way for another third party, the Parti/Bloc Québécois, to displace the Conservative Party ("les bleus") as a credible alternative to the Liberals ("les rouges") in both provincial and federal Quebec politics. A second legacy is that it voiced the concerns of those Québécois who valued individual freedom and were opposed to excessive state involvement in the private economic sector. This concern is again being articulated by another third party, the right-of-centre Action Democratique de Québec (ADQ), and its charismatic young leader, Mario Dumont. However, the conservative orientation of the ADQ is quite different from that of the Créditistes, and reflects the neo-conservatism of a modern, urban-based, individualistic and entrepreneurial-minded new middle class in that province that is less committed to the ideology of Québec independence.