Crash Test Dummies, a rock group, was formed in Winnipeg in 1988 and led by foghorn-voiced singer-songwriter Bradley Kenneth Roberts (b at Winnipeg 10 Jan 1964). While studying English and philosophy at the University of Winnipeg, Roberts was part of the house band (Bad Brad Roberts and the St James Rhythm Pigs) at the Blue Note club. On the advice of a medical student, the group changed its name to Crash Test Dummies. The lineup eventually stabilized around core members Roberts, vocalist and keyboardist Ellen Reid, multi-instrumentalist Benjamin Darvill, drummer Michael Dorge and bass guitarist Dan Roberts, Brad's brother.

The Dummies signed with BMG Music Canada, and released The Ghosts That Haunt Me in April 1991. Roberts's distinctive baritone and intelligent songwriting was captured on the ballad "Superman's Song"; it was one of the year's most successful Canadian singles, boosting album sales to 400 000 units and earning the band a 1991 Juno as Group of the Year. God Shuffled His Feet (1993) included an equally unusual first single, "Mmm Mmm Mmm Mmm," in addition to cover artwork that superimposed the faces of band members atop figures in the Titian painting "Bacchus and Ariadne."A Worm's Life (1996) included the prototypically quirky singles "He Liked To Feel It" and "My Own Sunrise," but album sales fell well short of past standards. The band recorded Give Yourself a Hand (1999) with Peterborough, Ontario, native Greg Wells. While that album marked the end of their relationship with the multi-national record industry, the Dummies have continued to tour and record, releasing the independent albums I Don't Care That You Don't Mind (2001), Jingle All The Way (2002) and Puss'n' Boots (2003). Solo albums have also been released in recent years by Brad Roberts (Crash Test Dude), Reid (Cinderellen), Dorge (As Trees Walking) and Darvill (Son of Dave and Wild West Show). 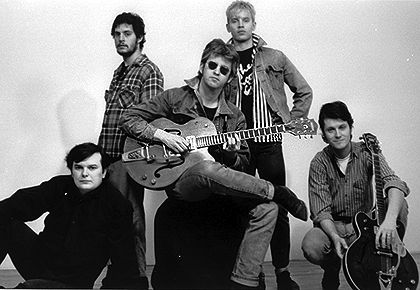