Historically, the cradleboard (or cradle board), was used by various Indigenous peoples to protect and carry babies. Securely bound to a thin rectangular board, a baby could be carried on its mother's back or put in a safe location while she performed her daily routine. In some communities, Indigenous peoples still use cradleboards.

Historically, the cradleboard (or cradle board), was used by various Indigenous peoples to protect and carry babies. Securely bound to a thin rectangular board, a baby could be carried on its mother's back or put in a safe location while she performed her daily routine. In some communities, Indigenous peoples still use cradleboards. 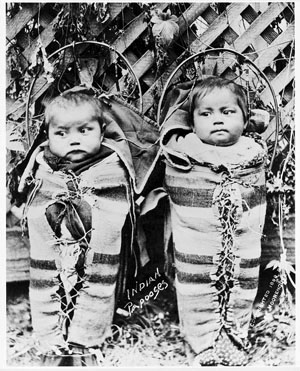 A cradleboard is a device traditionally used by Indigenous peoples to secure babies in place (typically for the first year or so) while their parents travelled, worked or were otherwise occupied. Infants were bound to a thin rectangular board and wrapped in blankets for comfort and warmth. The design of the board prevented injury to the child even if it were to fall over. In many types of cradleboards, a hoop or bow at the top served to protect the infant's head. Some designs also featured a foot rest so that the baby wouldn’t fall out through the bottom. The exact form varied from group to group throughout North America. Considerable energy was spent decorating the cradle board and its fittings.

There are various words for “cradleboard” in Indigenous languages, including dikinaaganan in Anishinaabemowin, tikinakan in Cree, ao’tópistaanistsi in Siksikáí’powahsin, and kalhu in Oneida. In the past, settlers have incorrectly referred to cradleboards as “papoose.” This is an Algonquian word which loosely translates to “child.”

DID YOU KNOW?
In some Indigenous communities, adults fashioned mini cradleboards for children to use during playtime. They also functioned as learning tools for young girls who might, one day, become mothers. Some of these toys can be found in museums across North America.

One of the main functions of the cradleboard was to serve as a baby carrier. Cradleboards gave on-the-go mothers more freedom because they could safely secure babies to their backs. Mothers could also lean the cradleboard up against a tree or structure while they worked. In this position, babies were prevented from crawling or walking toward certain hazards, such as open fires.

Some women even suspended the cradleboard from a tree branch or structure to act as a sort of hammock or swing, providing the child with amusement. Toys, dreamcatchers and other objects could be attached to the cradleboard to either entertain children or for cultural purposes.

Another benefit of the cradleboard was that it allowed babies to quietly observe nature and the daily routines of those around them. In many Indigenous cultures, observation was an integral part of learning patience and mindfulness.

DID YOU KNOW?
Inspired by the motion of a swinging cradleboard, Ojibwe woman Susan Olivia Poole invented what became known as the Jolly Jumper in 1910. Originally from the White Earth Indian Reservation in Minnesota, Poole was living in Canada raising her children when she came up with the idea. Poole began producing the Jolly Jumper in 1948 for her grandchildren, and patented the invention in 1957.

Different Indigenous communities had their own designs and styles of cradleboards. For example, the Mohawk tended to make long and narrow cradleboards, while the Seneca preferred a style with side rails. The Oneida made cradleboards using leather strips and wood, while some Ojibwe peoples wrapped their infants in moss bags before securing them to the cradleboard.

Most cradleboards were decorated with carvings and paintings. The blankets wrapped around infants were also adorned with beadwork and stitching designs. Some Indigenous peoples crafted designs on the back of the boards, and included important images such as clan symbols and other culturally significant emblems and patterns.

The cradleboard, like other Indigenous innovations, are culturally significant because they are part of traditional knowledge systems. Colonization brought European childrearing practices that largely took the place of practices specific to Indigenous cultures. Elders and Indigenous communities across Canada work to protect and promote cultural traditions to avoid losing them altogether. Some Indigenous peoples continue to use cradleboards because of their practical function, but also because of their cultural significance.

Museums and archives across the country preserve cradleboards in their institutions. These artifacts demonstrate that cradleboards can also be seen as pieces of art. The carvings, paintings and other decorations are the beautiful works of highly skilled craftspeople.(See also History of Indigenous Art in Canada.) 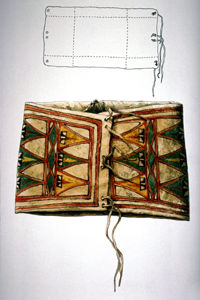 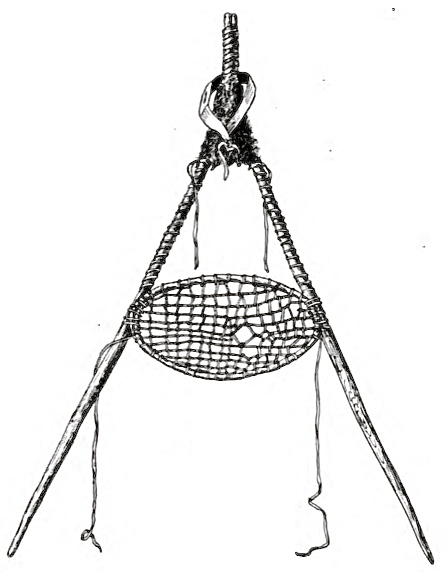