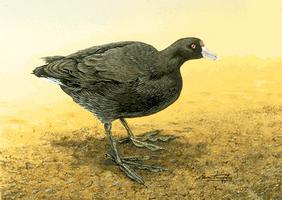 The lobed toes of the coot are adaptations to its life in the marsh (artwork by Claire Tremblay). Sound of the coot courtesy Monty Brigham, Bird Sounds of Canada. 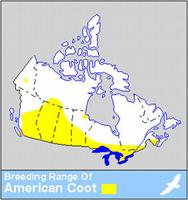 The coot is an aquatic bird of the rail family.

Eleven species occur worldwide; only the American coot (Fulica americana) is found in North America. Coots, often called mud hens, breed in the pothole marshes and sloughs of southern Canada and as far north as Great Slave Lake. Although a marsh dweller, the coot is conspicuous because, except when molting, it swims, dives and feeds in open water rather than confining itself to dense marsh thickets. Coots migrate in the evening and at night, wintering on lakes, brackish water and estuaries on the southern and eastern US coasts.

The American coot is a white-billed, slaty black chickenlike bird which bobs its head as it swims, picking bits of vegetation and animal life from the surface, occasionally diving for food. Its lobed toes are an adaptation to aquatic life. Its pugnacious behaviour helps ensure biological success