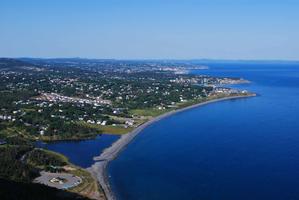 Conception Bay is one of the principal bays of Newfoundland, formed by 2 north-reaching arms of the Avalon Peninsula. Its name, one of the earliest recorded (1527), commemorates the Feast of the Immaculate Conception. Cape St Francis to the east and Split Point, 32 km northwest, mark the mouth of the bay, which stretches 70 km south to Holyrood. Its shoreline, varying from rugged cliffs and fjordlike inlets to gentle sandy beaches and excellent harbours, was the province's earliest settled; its rich marine resources were utilized by Europeans from the early 1500s. In 1610 Cupids was the site of the first formal English colony in present-day Canada. Conception Bay has always been Newfoundland's most populous bay. Bell Island in the east, the bay's largest island, was the location of an important iron-ore mine.