Cowpland is the founder and director of Corel, one of the world's most successful software companies (courtesy Corel Corp). 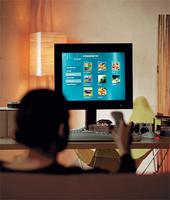 Computer firms are engineering new computer systems that will provide TV, movies and digital music files with the click of a remote control (courtesy Maclean's).
PreviousNext

The Canadian computer industry consists of companies that provide computer hardware and software, networking technologies and related services. It is difficult to get an exact picture of this volatile industry; companies merge and go in and out of business at such a rate that it is difficult to catalogue them accurately. With such extensive change within the industry, the accuracy of reported figures may be questionable. For example, in 1994 Evans Research Corp included 5 Canadian companies - Sidus Systems, 3D Microcomputers, Seanix Technology, Empac, and STD Technology - in its list of the top 10 personal computer vendors in Canada, while the top 10 list by International Data Corp included only Sidus and Seanix. Additionally, many of the companies operating in Canada are subsidiaries of foreign-owned companies, most of which are American.

Hardware
Historically, computer hardware has been divided into 3 broad classes: large mainframe computers, somewhat smaller minicomputers and the personal computers (PCs) or microcomputers that have become familiar office and home fixtures since the mid-1980s. This last sector now includes portable or notebook computers that are easily carried around.

A new category, straddling the divide between computers and consumer electronics, takes in personal digital assistants (PDAs) and other devices small enough to fit in a hand or pocket. All types of computers have associated peripheral devices, such as printers, display monitors, external data-storage devices and modems used to transmit and receive data over telephone lines, cable or fiber optic lines.

Software
SoftwareCanada has always been stronger in computer software than in hardware, partly because the software business is less capital-intensive than hardware. At least 2 Canadian makers of personal computer software - Delrina Corp (Toronto) and Corel Corp (Ottawa) - are leaders in their respective fields.

Growth Rate
The annual growth rate of total expenditure in computer goods and services was as high as 20% during the 1970s, but in recent years it has been closer to 12%. This reduction is not the result of any slowdown in the use of computers: Canada ranks second only to the US in its yearly computer expenditure as a percentage of Gross Domestic Product. Rather, it reflects a dramatic reduction in computer hardware prices and improved operator and programming efficiencies brought about by more powerful and "user-friendly" software packages.

Research and Development
Total Canadian expenditures on computer and communications research and development in Canada in 1985 was expected to be about $300 million, of which about 25% was to be spent in government laboratories, 25% in the universities and 50% in the private sector. Of private-sector R&D expenditures, about 75% or $100 million was to be spent by Canadian-owned firms; in contrast the world's 10 major computer companies were expected to spend over $8 billion. Canadian industrial expenditure will clearly be inadequate for anything other than the creation of very small, specialized niches in the world computer market.

A number of Canada's computer manufacturing and industrial research facilities are located in Ontario: firms such as Gandalf and Mitel in the Ottawa area; IBM and Xerox have establishments in the Toronto area. Some notable other facilities are Matrox in Montréal, Develcon in Saskatoon, Myrias Research in Edmonton, and LSI Logic with fabrication facilities in Calgary and design stations across the country.

The country's major common carriers have their own research facilities and some also have manufacturing facilities. These establishments are dispersed throughout Canada and tend to specialize in computerlike communications control systems and intelligent terminals that incorporate microcomputers.

In 1987, 1 561 000 personal computers were installed in Canada, overshadowing by a considerable margin the 25 000 other computers. Of the total number 610 500 were used in business, 301 300 in education and 649 700 in the home. The importance of "mainframes" or large central systems has decreased considerably. The power and capability of the so-called "micro" has enabled the average user to perform 90% of the required computation on a "stand-alone" which can be interfaced to the mainframe for operations that either are too big to be handled locally or need access to large data bases.

An examination of the 100 top computer companies in 1986 reflects this trend: IBM had a negative 7% growth which was reflected by a similar 7.1% decrease for all mainframe suppliers. Suppliers of small and medium systems, on the other hand, grew by 18%. Computers and related devices are expected to change dramatically during the remainder of the 20th century and industries based on computer technology will become extremely important to the economic well-being of Canada.

Some experts predict that the information industry (ie, the computer-communications industry) will rival the transportation industry as a contributor to Canada's Gross Domestic Product by the year 2000.