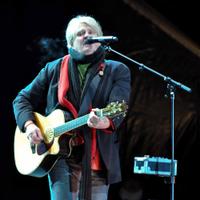 Tom Cochrane, singer, songwriter (b at Lynn Lake, Man 14 May 1953). Following early struggles as a solo artist (the album Hang on to Your Resistance, 1974) and soundtrack composer (My Pleasure Is My Business, 1976), Tom Cochrane joined the Southern Ontario band Red Rider in 1977. The group released 7 increasingly popular albums in the years 1980-89, achieving US radio success with the album Neruda (1983, inspired in part by Chilean poet Pablo Neruda) and scoring Canadian hits with such songs as "Human Race,""Boy Inside the Man" and "Big League."

Tom Cochrane ended his relationship with Red Rider after The Symphony Sessions, a 1989 live recording with the EDMONTON SYMPHONY ORCHESTRA. He achieved significant international success under his own name with Mad Mad World (1992). Led by the anthemic international top-10 single "Life Is a Highway," the album sold more than 2 million copies worldwide, earned Cochrane a US Grammy Award nomination and resulted in a sweep of major trophies at the 1992 JUNO AWARDS. Ragged Ass Road (1995) and X-Ray Sierra (1998) failed to duplicate that success, but both albums solidified Cochrane's reputation as an intelligent, questing songwriter.

Tom Cochrane was inducted into the Canadian Music Hall of Fame in 2003. A few months earlier he released the double-CD greatest hits collection Trapeze. It includes the new song "Just Like Ali," a tribute to two men afflicted with Parkinson's disease - the boxer Muhammad Ali and Cochrane's late father, Tuck. Proceeds from sales of the album and single went to the Parkinson's Society of Canada.

No Stranger (2006) included his cover of Norman Greenbaum's classic "Spirit in the Sky" along with such originals as "The Party's Not Over" and "While You Are Young." He continued to rack up significant royalties for "Life Is a Highway" after Nashville band Rascal Flatts covered the song for the animated film Cars that same year.