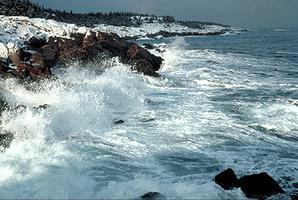 The rugged Atlantic coast off Nova Scotia is marked by many inlets, islands, coves and bays (photo by J.A. Kraulis/Masterfile). \n

The mountainous West Coast is characterized by deep fjords and large offshore islands that provide shelter for coastal waters (eg, in the Strait of Georgia). The moist, mild climate is influenced by an extension of the Kuroshio Current, which moves warm water eastward across the Pacific Ocean. The most important fishes are the 5 species of pacific salmon, which breed in Canadian rivers but migrate to the sea, where they live and grow for several years. For example, after hatching, pink salmon enter the Pacific and swim in the nutrient-rich gyre of the Alaska Current for about a year before returning to the rivers to breed.

North from BC, at the shores of the Arctic Ocean, lies the Beaufort Sea, into which flows one of Canada's major rivers, the Mackenzie. The fresh water discharged there forms heavy ice cover for much of the year. The Beaufort Sea has important petroleum deposits. The largest is the Amauligak field. Navigation is hazardous because of sea ice and numerous submerged mounds of ice and sediment known as pingos.

Arctic surface water flows eastward to Baffin Bay through the Canadian Arctic Archipelago. This maze of waterways contains meagre fish resources, but parts of it (eg, Lancaster Sound) support large aggregations of seabirds and marine mammals, on which the native peoples have traditionally depended. Care must be taken to protect these resources during the extraction and transportation of oil and natural gas. Emerging through Jones and Lancaster sounds, the flow through the archipelago joins the southward-moving Baffin Current.

At Hudson Strait, large amounts of fresh water (derived primarily from ice melt and river discharge into Hudson Bay) are injected into the flow, which continues south as the Labrador Current. This fresh water stimulates biological productivity in the coastal waters of Labrador, which become progressively more productive from north to south. The seasonal variation in river runoff (peaking in spring when the snow melts) may cause seasonal variations in fisheries production all the way to Newfoundland's Grand Banks. Hamilton Bank, offshore from Hamilton Inlet on the Labrador Shelf, has historically been an important cod fishing area, but its value has declined with the demise of the northern cod stock. In spring, the pack ice off Newfoundland and Labrador is an important breeding ground for harp and hooded seals.

The Grand Banks, with almost 282 500 km2 of water shallower than 200 m, has been known for over 400 years as one of the world's great fishing banks. Until the end of the 20th century it was very rich in cod, haddock, redfish, flatfish (including halibut), mackerel and herring. The Hibernia oil field began production in 1997 to exploit the substantial oil reserves beneath the sea floor. The nearby Terra Nova field opened in 2002.

As the inshore branch of the Labrador Current continues around the southern coast of Newfoundland, part of it enters the Gulf of St. Lawrence, where it joins an inflow from the Stait of Belle Isle separating Newfoundland and Labrador. The outflow of the St. Lawrence River tends to follow the south shore, producing an anticlockwise circulation in the gulf. Two main factors contribute to high biological productivity in the gulf: its warm summer temperatures and the mixing between surface and deep, nutrient-rich waters, which enter from the Atlantic through the Laurentian Channel. The Gulf of St Lawrence is known particularly for its lobster, scallop, groundfish, mackerel and herring fisheries. Whales and other mammals are also abundant, especially near the north shore. There is important vessel traffic to the Great Lakes, but sea ice is a major impediment to shipping in winter.

The circulation on the Scotian Shelf is dominated by a southwestward coastal current flowing from the Gulf of St Lawrence to the Gulf of Maine. The especially productive offshore edge of the shelf is influenced periodically by warm water masses that pinch off from the Gulf Stream to the south. At the southwestern end of the shelf, strong tidal currents cause a clockwise residual flow around shallow banks that is conducive to the survival of larval fishes. Near the coast, tidal mixing and upwelling of nutrient-rich deep water ensures the high productivity of finfish and lobster.

The Bay of Fundy experiences some of the world's highest tides. The vigorous water movement brings the deep, nutrient-rich water to the surface, but the heavy load of sediment stirred up into suspension limits the penetration of light. As a result, the bay's upper reaches have rather low productivity and are used mainly by shorebirds and migrating shad; but the mouth of Fundy is an important fishing area for scallops and herring, and attracts whales and seabirds.

Potentially, the bay's most important economic benefit is for tidal energy. After intensive engineering and environmental studies, a pilot project has been constructed on the Annapolis River.

Straddling the border between Canada and the US is Georges Bank, which has outstandingly high biological productivity, related to tidal mixing and circulation. Bank waters support large stocks of herring, haddock, cod and scallops, and it appears that lobster larvae produced there are carried to the southern part of Nova Scotia, thus ensuring a continuing replenishment of that stock. After decades of overfishing, a moratorium was put in place to protect the groundfish stocks.