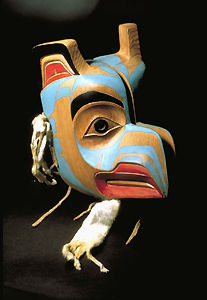 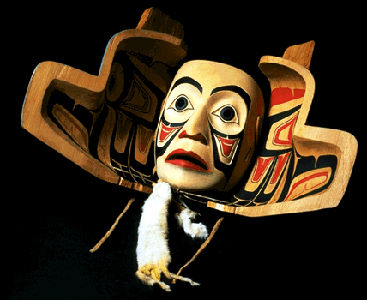 A transformation mask expresses the theme of metamorphosis between beings of the land, sea and sky. Mask of cedar and ermine tails by Ken Mowat. 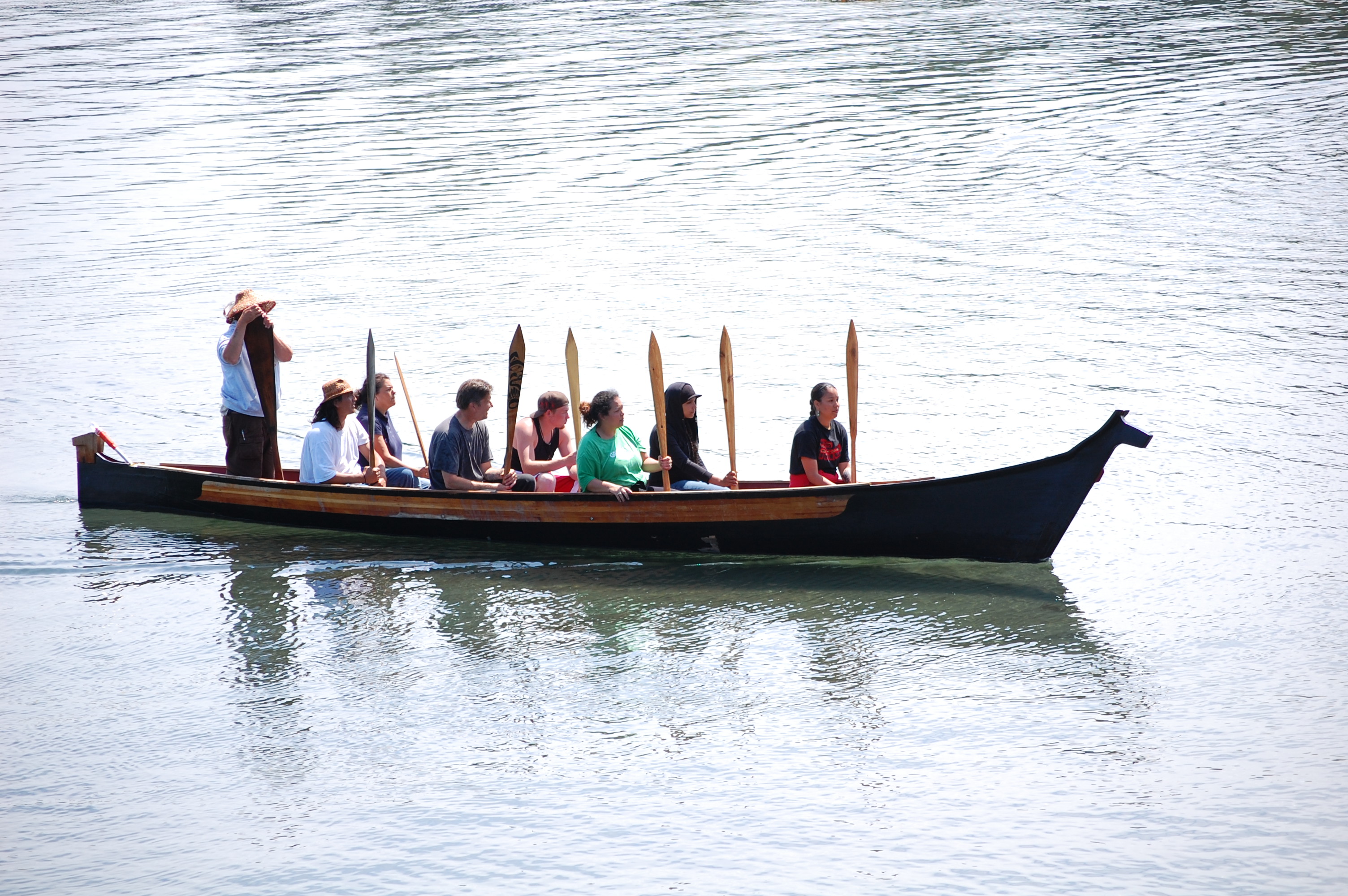 A Coast Salish canoe awaiting traditional invitation by the S'Klallam people to make landfall at a beach in Port Angeles, Washington, USA.
PreviousNext

Coast Salish peoples include a variety of First Nations living along the Northwest Pacific Coast in British Columbia, from the Lower Mainland and Vancouver Island south to western Washington and northwestern Oregon in the United States (See also Central Coast Salish, Northern Straits Salish and Interior Salish). Although these nations have their own distinct customs and traditions, and speak various languages and dialects, there are generally strong ethnic and cultural ties between Coast Salish communities. Some Coast Salish nations in Canada include:

Historically, Coast Salish peoples lived in permanent villages during the winter. When they gathered food in the summer, they lived in temporary camps. Coast Salish peoples often lived in large shed-roofed houses, sometimes referred to as plank houses. Plank houses were often made of cedar wood (See also Architectural History: Indigenous Peoples). Fishing was, and remains, an important part of Coast Salish culture and economy; the harvesting of fruits, vegetables and nuts supplemented their diet.

Potlatches were (and still are) important to Coast Salish society and culture. They functioned to distribute wealth; confer status and rank upon individuals, kin groups and clans; and to establish claims to names, powers and rights to hunting and fishing territories. Like other Northwest Coast Indigenous peoples, the Coast Salish are well known for their art. House posts and design motifs featuring Northwest Coast animals and spiritual beings are prominent in their art works (See also Northwest Coast Indigenous Art).

Coast Salish culture and traditional knowledge survive through oral histories. Although Coast Salish legends vary from nation to nation, they often feature many of the same spiritual figures and tell similar creation stories. One example of such a tale is the story of how Old-Man-In-The-Sky created the world, animals and humans. These stories also highlight the importance of certain creatures and elements of nature, such as the salmon and red cedar, which are considered sacred for spiritual reasons and because of the valuable resources they provide for the people.

Coast Salish languages are part of the Salishan linguistic family. Many Salishan languages are endangered because of federal policies and programs aimed at assimilation, such as residential schools, which significantly decreased the number of fluent speakers. Language revitalization programs, such as those at local universities, colleges and high schools, record and promote these Indigenous languages as much as possible.

Did You Know?
In June 2019, Carlyn Andres of the Katzie First Nation sang the Beatles song “Blackbird” in hən̓q̓əmin̓əm̓, a traditional language of her people that is part of the Salishan linguistic family (See Indigenous Languages in Canada). Hən̓q̓əmin̓əm̓ is considered an endangered language and is spoken among the Coast Salish people of British Columbia.

Between 1850 and 1854, the Governor of Vancouver Island, James Douglas, made treaties with Coast Salish peoples as a means of freeing up their traditional territories for white settlement. In these treaties, commonly known as the Douglas treaties, Indigenous signatories forfeited their title to the land in exchange for clothing, cash and other goods. Descendants of these signatories have argued that their ancestors were unaware of the true meaning and intent of the treaties — the surrender of their rights to the territory. Rather, they believed they were signing a treaty to share the land. Many contemporary Coast Salish peoples also contend that some of their ancestors signed blank sheets which were later filled by the colonial government with conditions that the Indigenous signatories had not seen. Today, many Coast Salish nations are actively pursuing treaties and land claims with federal and provincial governments, and are working towards self-government. Some Coast Salish nations have banded together to achieve their shared goals, such as the Hul’qumi’num Treaty Group, (founded in 1993), which includes six First Nations: Cowichan, Chemainus, Penelakut, Lyackson, Halalt and Lake Cowichan.

Coast Salish peoples strive to protect and promote their history, heritage and way of life through various cultural and educational initiatives. Community leaders work together to defend the environment and their rights to harvest natural resources. Since 2005, the Coast Salish Gathering — a cross-border organization representing Coast Salish environmental interests — has met annually to discuss and develop the health of the Salish Sea ecosystem.