The fluidity of party lines, the predominance of patronage, and the novelty of responsible government led to several experimental coalition arrangements in New Brunswick, Nova Scotia and the Province of Canada in the 1840s and 1850s. The best known were in 1854 and 1864 in the Province of Canada. 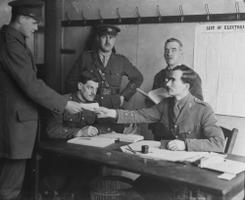 At the national level, the only coalition has been Sir Robert Borden’s 1917 Union Government. Faced with strong opposition to conscription and with other major difficulties during the First World War, Borden sought to broaden his wartime political base by bringing several conscriptionist Liberals and other public figures into his government. In the election of 1917, held in December, this government won a decisive victory over Sir Wilfrid Laurier's Liberals. The Union coalition did not last long: the end of the war in November 1918 brought many Liberals back to their old affiliation, while other Unionists supported the new Progressive Party. With Borden's retirement in 1920, the pretense of coalition disappeared.

The Union government illustrated the dangers of coalition: for some time after 1917, French Canadians associated coalitions with conscription (see Election of 1917). During the Second World War, proposals for coalitions or a "National Government" came from those who also called for a stronger war effort and conscription. There have been few proposals for federal coalition governments since the Second World War.

The 2008 election returned Stephen Harper’s Conservative Party to its second minority government. Just six weeks after the election, and in response to the Tories’ fiscal update, the opposition Liberals led by Stéphane Dion and the New Democratic Party (NDP) led by Jack Layton signed an agreement to form a coalition government if the Conservative government was defeated on a confidence vote. The Bloc Québécois (BQ) agreed to provide voting support.

In order to thwart the confidence vote and coalition, which would have held a majority of seats in the House of Commons, Harper requested that the Governor General prorogue Parliament. By the time Parliament resumed in January 2009, Dion had resigned and Michael Ignatieff had become acting leader of the Liberal Party. Ignatieff did not support the notion of coalitions and the matter was dropped. (See also A Crisis That Shook the Nation.)

Coalitions have formed at the provincial level. During the Great Depression, the Progressive Party of Manitoba combined with the Manitoba Liberal Party ahead of the 1932 provincial election and won, holding off a challenge from the Conservatives. In 1940, all Manitoba political parties joined a non-partisan administration formed to meet the province’s wartime demands. In British Columbia, a wartime coalition between the Liberals and Conservatives held off the challenge of the Co-operative Commonwealth Federation (CCF). The coalition probably benefited the CCF; it certainly damaged the Liberals and Conservatives, who were soon supplanted by Social Credit. In Ontario, the minority Liberal government of David Peterson governed from 1985 to 1987 with an explicit written agreement with the NDP. However, it was not a coalition agreement in the strict sense because NDP members were not appointed to Cabinet or given any authority. The NDP did however have influence on policy and legislation.

The Liberal government of Premier Christy Clark was narrowly returned to power in British Columbia after the provincial election on 9 May 2017. Having won 43 seats, the Liberals were in a position to form the first minority government in the province since 1952. (With 87 seats in the legislature, 44 seats were required for a majority.) The NDP and the Green Party won 41 and 3 seats respectively. On 29 May, NDP leader John Horgan and Green Party leader Andrew Weaver jointly announced that their parties had worked out a “Confidence and Supply Agreement” in which the Greens would support the NDP on budgetary policy and confidence motions. The agreement would give the NDP the majority support of 44 members of the Legislative Assembly. However, the intention was to run a minority NDP government buoyed by Green support, rather than form a true coalition government with joint Cabinet.