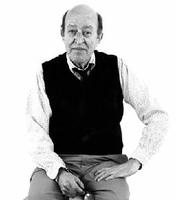 Greenberg was one of the most important art critics of the 20th century and he had a profound effect on many modern Canadian painters (photo by Eleonar Lazare).

Clement Greenberg, art critic (born 16 January 1909 in the Bronx, New York, NY; died 7 May 1994 in New York, NY). Clement Greenberg was one of the most significant American art critics of the 20th century and through both his writings and his visits to Canada, exerted a substantial impact of the development of abstract art in Canada, including the work of members of Painters Eleven.

Clement Greenberg graduated in literature from Syracuse University in Syracuse, New York in 1930, taught himself Latin and German, began to work as a United States customs clerk (1937) and then to publish political and cultural commentary in Partisan Review and The Nation.

In the first phase of his career (1939-1948), Greenberg was a Trotskyite socialist (a vision of socialism based on the ideas of the exiled and ultimately murdered Russian revolutionary and thinker Leon Trotsky) with an interest in the social and psychological background of the artist and in theories of the medium, especially those of influential German-born painter and educator Hans Hofmann. He became known as an early, articulate champion of American abstract painters Jackson Pollock and Adolph Gottlieb and sculptor David Smith.

Over the years, Greenberg increasingly relied on his interpretation of German philosopher Immanuel Kant's Critique of Judgment (1790), emphasizing almost exclusively aesthetic judgment, visual syntax and the relations of each new generation of artists to its artistic forebears. Greenberg consistently admired such formal properties as a "hard-won unity," but argued that art criticism can never have precise criteria for judgment, in part because artistic "content remains indefinable, unparaphrasable, undiscussable."

His interpretation in "Modernist Painting" (1961) with its definition of "optical" (i.e., indeterminate) space became the governing concept in discussion of artistic modernism throughout the English-speaking world.

Greenberg visited Toronto at the suggestion of William Ronald in June 1957. His studio visits there were a decisive benefit to Jock Macdonald and Jack Bush, who were stimulated by his praise, encouragement to work in more personal ways, and who were exhorted to "cauterize the infectious influence" of excessive admiration for New York art and artists.

In 1962, Greenberg was guest critic at the Emma Lake Artists’ Workshops , where he introduced the work of second-generation American abstract painters Morris Louis, Jules Olitski and Kenneth Noland to a Canadian audience, stimulated Andrew Hudson as a critic, and had a significant impact on painters Kenneth Lochhead, Dorothy Knowles and Ernest Lindner. In numerous later visits to Edmonton, Saskatoon and Toronto he stimulated various artists with his workshop criticism. He was the principal model for critics Terry Fenton and Karen Wilkin.

Greenberg became an extraordinarily controversial figure, widely reviled as authoritarian, elitist, and exclusionary by such artists as Ronald Bloore, and praised by many others as a great eye, a defender of high artistic standards, a stimulus to creativity and a generous entrée to art abroad.