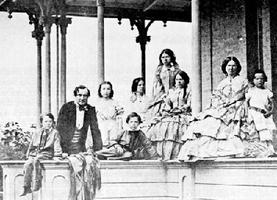 As a superintendent of public works of the Province of Canada, Gzowski was one of early Canada's outstanding builders. He is shown here with his 5 sons and 3 daughters (courtesy PAO).
PreviousNext

Civil engineering is a broad field of ENGINEERING concerned with the planning, design, construction and operation of much of the infrastructure of civilization, such as buildings, transportation systems and sanitation systems, etc; soil mechanics and water resources; city planning; and SURVEYING and mapping. Civil engineers played a leading role in creating Canada as we know it today - an expansive nation linked by railways, bridges, highways and canals, rendered arable by drainage and irrigation projects and habitable because of water and sewer systems.

Before the multiplication of engineering disciplines in the late 19th and early 20th centuries, engineers were either military or civilian. Civilian engineers built nonmilitary structures; those in the military concentrated on FORTIFICATIONS. The early engineers in what is now Canada were almost exclusively military. In New France, military engineers were responsible for surveying, road building and fortification, and their work was taken over and further developed by British army sappers and miners (engineers) after the conquest. Civilian engineers became involved before the turn of the 19th century.

For example, while CANAL building began as a military specialty, the first lock on the Sault Ste Marie canal was built in 1797-98 by the North West Company. Civil engineers were involved in such projects as the development of steamboats and railways and the construction of roads, public buildings, harbours, etc.

Since 1983 the Canadian Society for Civil Engineering has recognized historic landmarks, including the ALASKA HIGHWAY, the QUEEN ELIZABETH WAY (Canada's first controlled-access superhighway), the St. Clair Railway Tunnel (one of North America's first subaqueous TUNNELS, connecting Sarnia, Ont and Port Huron, Mich under the St Clair River), and Nova Scotia's CHIGNECTO Marine Transport Railway (an ambitious but never-completed project intended to carry boats between the Bay of Fundy and Baie Verte). Also recognized is the infamous Québec Bridge, which collapsed twice into the St Lawrence River, killing more than 85 workers before it opened in 1919 as the world's longest steel cantilever bridge (see QUÉBEC BRIDGE DISASTERS and IRON RING).

Early engineers received their training as apprentices to established professionals such as Samuel KEEFER, his brother, Thomas KEEFER, leading hydraulic engineer of his time, or Sir Casimir GZOWSKI, engineer of the international bridge over the Niagara River. As the extent of Canada's mineral and other resource wealth became apparent, and as the railway boom developed, it became necessary to establish formal training programs to provide engineering expertise.

The first such courses were offered at King's College (now University of New Brunswick) in 1854; however, the real expansion in training began in the 1870s, when, within the course of 5 years, programs were established at McGill, École Polytechnique de Montréal; School of Practical Sciences, Toronto; and ROYAL MILITARY COLLEGE, Kingston. The profession has continued to expand since that time.

Today, the civil engineer's work tends to be highly specialized, covering every conceivable aspect of public and private construction.

Surveying
Surveying is the delineation of the position and form of natural or man-made features on a tract of land. Land must be surveyed before building can begin in order to determine legal boundaries, slopes, potential hazards, etc.

Soil Mechanics or Geotechnical Engineering
This is the branch of civil engineering that deals with characteristics of the substrate (soil or rock) that influence the suitability of a site for a given form of construction (eg, shear stress on slopes, plasticity of soil, soil seepage) and the peripheral structures needed to make a site safe for a specific structure (eg, foundations, drainage structures). Soil mechanics is important not only to the safe and economical exploitation of familiar environments, but also to successful use of fragile or hostile environments (eg, PERMAFROST).

Hydrotechnical or Water Resource Engineering
This deals with irrigation, drainage, the control of water hazards (eg, floods), harbour and river development for transportation, the improvement of water availability and the protection of structures from attack by water (eg, ocean waves, normal river flow).

Environmental Engineering
Environmental engineering is concerned with minimizing the environmental impacts of proposed engineering schemes. It usually includes sanitary engineering, an important part of URBAN AND REGIONAL PLANNING, and deals with the design of water distribution and waste disposal systems to ensure that people have clean, healthy water to drink and that sewage does not become a pollution hazard.

Before the turn of the century, a civil engineer would have designed many different structures; for example, Thomas Keefer began the survey of the Kingston to Toronto railway connection, and designed the waterworks for Hamilton, Ont (1859) and Ottawa (1874) and many other public works.

Today, civil engineers must co-operate with specialists from many nonengineering disciplines and engineering subfields to complete a single project. For example, engineers who specialize in urban planning and transportation engineering assist architects and planners in the initial design of a shopping centre.

Once the location and size of the centre is determined, a more detailed design is produced. Traffic engineers design entrances and exits and lay out parking lots; structural engineers work with the architect to design the buildings; other engineers design the heating and ventilation, plumbing and electrical systems and join in the design process to produce a set of engineering drawings and specifications. These are the documents from which the construction engineer estimates the cost of erecting the centre. These drawings and specifications form part of a contract, specifying the rights and duties of the contractor, the engineer and the owner, drawn up with the aid of lawyers specializing in engineering law.

Students studying to be civil engineers must complete a 4-5-year university program. Civil engineering programs are periodically reviewed and accredited by the Canadian Engineering Accreditation Board of the Canadian Council of Professional Engineers. After graduation the student may be required to write an exam on professional practice to be accepted into a provincial professional engineers association as an engineer in training. After 2 to 4 years of work experience (depending on the provincial association), the trainee may apply for full membership and, based on the recommendations of employers, will be accepted as a professional engineer.