Chuckwagon races have become modified horse races; since 1923, races have concluded, not by firing up the stove, but by crossing the finish line in front of the grandstand, and, instead of draft horse teams, entrants use thoroughbreds.

Chuckwagon race at the Calgary Stampede (courtesy The Calgary Exhibition and Stampede). 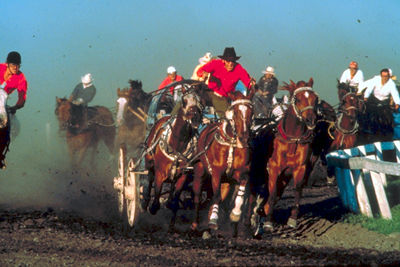 Chuckwagon races, a RODEO event first staged at the CALGARY STAMPEDE in 1923, are based on the cowboy tradition of breaking camp after a cattle round-up and racing for home. The first races mimicked range practice. Every entry had a regulation food wagon with chuck box, water barrel and camp stove, all drawn by a 4-horse team and guided by 4 outriders. A pistol shot signalled the outriders to load stove and gear into the wagon; the rigs then raced around barrels in the centre of the arena, ran a half-mile circuit of the racetrack, and finished by unhitching the team and firing up the cook stove. The first outfit to make smoke won. Ranches sponsored rigs in the races; prominent winners have included Dick Cosgrave (1930s and 1940s), Hank Willard (1950s), Hally Walgenbach (1960s), Kelly Sutherland (1970s) and Tom Glass (1980s).

Chuckwagon races have become modified horse races; since 1923, races have concluded, not by firing up the stove, but by crossing the finish line in front of the grandstand, and, instead of draft horse teams, entrants use thoroughbreds.

Wrecks or crashes have always been part of the races. The deaths of 2 competitors, a spectator and numerous horses since the 1950s have often prompted calls to ban the races. In 1986 controversy over a crash involving the deaths of several horses led to proposed safety changes, including the removal of stove racks at the rear of the wagons, the use of collapsible starting barrels and reduction in the size of each heat. Despite these measures, tragedy struck again in 1996 and 1999 when crashes claimed the lives of 2 more competitors. With the total prize money for the event today close to half a million dollars, and riders racing for as much as $50 000, the treacherous event remains the most popular at the Stampede.