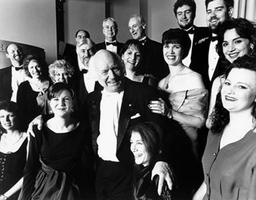 Iseler is considered the foremost Canadian choir conductor (photo courtesy Robert Missen Artists). The music is an excerpt from Glick's Sing Unto the Lord a New Song, performed by the Elmer Iseler Singers (courtesy CBC).

Choral music is performed by groups of singers, called a choir or chorus, in which there is more than one voice to a part. A group with only one voice to a part is called an ensemble. A choir may consist of women only, men only (or boys and men) or may be mixed, with both women and men. The voice parts in a mixed choir are usually soprano, alto, tenor and bass. There is choral music for 8-part (or more) mixed choirs where the sections are subdivided into first and second soprano, first and second alto, first and second tenor, baritone and bass. The voices with the higher tessitura are designated by the term "first." Sometimes a descant (an ornamental line usually higher than the soprano) is added, most often to the harmony to enhance the sound but not to cover the voices.

Choral music is commonly written on an open score with one of the staves for each voice part. Choral music may be written to be performed a cappella (unaccompanied) or it may be accompanied by piano, organ, or instrumental ensembles of varying combinations or orchestra. The chorus or choir is often combined with solo singers as in operas or oratorios. Choral compositions exist in various styles and forms, often indicated by the term applied to them, such as anthem, hymn, chorale, psalm, motet, cantata, madrigal, mass, passion, requiem, oratorio or all manner of settings of secular texts. The performance of choral music requires that the director develop a unified sound from the singers. This is dependent on correctly produced tone, uniform in quality; good intonation, which is dependent on correct tone production; and blend and balance, in turn dependent on intonation and on the number of singers in each voice part.

The first example of choral music known to have been written or arranged in Canada was "Great God Neptune" in the masque THÉÂTRE DE NEPTUNE EN LA NOUVELLE-FRANCE by Marc LESCARBOT, performed at Port-Royal (14 November 1606). Extant original writing or arranging of choral music by Canadian composers, in the 250 years following the Lescarbot composition, was published in church music collections, eg, J.P. Clarke's 6 hymn-tunes and 2 anthems in his Canadian Church Psalmody (1845). He also composed an 8-part anthem, "Arise, O Lord God, Forget Not the Poor" (1846). J-C. Brauneis wrote a "Mass" (1835), for choir, violin, flute, bass viol, bassoon and organ. Born in Québec City, Brauneis was perhaps the first Canadian to receive additional music education outside Canada.

Antoine DESSANE, who came to Canada from France (1849), composed a wealth of church music. Two other composers of the late 19th century were Joseph-Julien Perrault and Jean-Baptiste Labelle. In the first half of the 20th century, Canadian-born composers were among those writing choral music still directed to church performance. Noted for specific choral compositions are Guillaume COUTURE - the oratorio Jean le Precurseur (1909) and a setting of the Requiem Mass - and William Reed and A.S. VOGT, who wrote a number of short choral selections.

Contributions to choral composition by English composers living in Canada were made by Charles A.E. HARRISS, Daniel before the King (1890), Festival Mass (1901), A Coronation Mass (1902); by Percival Illsley, a cantata, Ruth (1894); Albert Ham, with cantatas The Solitude of the Passion (1917) and Advent Cantata; and Edward Broome. W.H. Anderson came to Winnipeg (1910) and Alfred Whitehead came to Nova Scotia (1912), later moving to Montréal. Both were prolific composers of sacred and secular music. Healey WILLAN, a well-established composer when he came to Canada (1913), left a legacy of outstanding choral music and was a strong influence on other composers. Claude CHAMPAGNE of Québec left the same type of influence on the young composers in his province, although he wrote few choral compositions. The Canadian Musical Heritage anthology includes 3 volumes of choral music, one each of oratorio and cantata excerpts and one of masses, all composed up to 1945.

It was in churches that choirs were organized and developed. Choirs often sponsored oratorio performances and sometimes concerts of both sacred and secular music. Various kinds of choral societies were formed by the middle of the 19th century. This growing interest in choral music was coupled with an excellence in performance which reached a high standard by the beginning of WWI. This same interest, vigour and excellence was not to resume until early in the 1970s, with a few exceptions such as the TORONTO MENDELSSOHN CHOIR, the FESTIVAL SINGERS and the Montreal Bach Choir.

In the 2 decades beginning in 1950, voluntary church choirs were no longer the main source of choral music. Many schools added choral music to the curriculum, and elementary and secondary schools and university music departments began to develop excellent choral groups. There is a great diversity in the groups that are spread across Canada. Examples are the Toronto Mendelssohn Choir, the Arion Male Voice Choir of Victoria, the Mennonite Children's Choir of Winnipeg, the Armdale Chorus of Halifax, the Montreal Bach Choir, the Elgar Choir of British Columbia, the Tudor Singers of Montréal, the Vancouver Chamber Choir, Coro Canada in Edmonton, the Electra Women's Choir of Vancouver, The Elmer Iseler Singers of Toronto, Men of the Deeps of Cape Breton, the Montreal Jubilation Gospel Choir, the Ottawa Choral Society, the Phoenix Chamber Choir of Vancouver, Studio de musique ancienne de Montréal, the Toronto Children's Chorus, the Vancouver Cantata Singers and the Winnipeg Male Voice Choir. (By the 1990s, the Armdale Chorus, the Montreal Black Choir, the Elgar Choir and the Tudor Singers had all ceased operation.) The CBC has provided opportunity for choirs to sing in radio competitions as well as on its network programs. By the late 1970s provincial choral federations were being formed, culminating in the foundation of the Association of Canadian Choral Conductors in 1980.