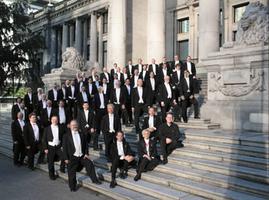 Chor Leoni Men's Choir. Vancouver-based amateur choir of 54 voices, formed in 1992 by director Diane Loomer. Initially 20 voices, Chor Leoni Men's Choir made its debut in Nov 1992 and in 1993 initiated a popular four-concert series for spring, summer, Remembrance Day and Christmas. Concerts, often repeated to accommodate an expanding audience, have been held at various Vancouver locations, including Christ Church Cathedral; Ryerson, Shaughnessy Heights, and West Vancouver United churches; and Vanier Park (Bard on the Beach Shakespeare Festival). Membership in Chor Leoni is by audition, but beginning in 2005 training opportunities for students have been provided through its Program for Mentoring Young Singers (PROMYS).

In addition to its concert series, Chor Leoni Men's Choir has appeared with the Vancouver Symphony Orchestra (with Judith Forst and Bramwell Tovey); the Vancouver Opera; the CBC Orchestra; Elektra Women's Choir; the Amabile Young Men's Ensemble; the Celtic fusion group Mad Pudding; and the Vancouver Chamber Choir. Chor Leoni has given two Canadian tours, visiting Victoria, Newfoundland, Nova Scotia and P.E.I. in 1997; and Quebec and Ontario in 2007, where it performed at the Stratford Summer Music Festival. On the international stage, Chor Leoni has performed at the American Choral Directors Association convention (2002, 2008); the AmericaFest World Festival of Singing for Boys and Men (2002); and the World Symposium on Choral Music (2002).

Chor Leoni Men's Choir has released a number of recordings on the Skylark and Cypress Choral Recordings labels; its album Yuletide Fires (2003) garnered outstanding recording awards from both the Association of Canadian Choral Conductors (ACCC) and the Western Canadian Music Awards in 2004. In 2008 the choir received the ACCC Outstanding Choral Recording award for the album Circle of Compassion (2007).

Chor Leoni has competed successfully on both national and international levels. It finished first in the CBC National Radio Competition for Amateur Choirs' Male Equal Voice (1994, 2000, 2002, 2006) and Contemporary categories (2002); and in 2002 was awarded the prize for Best Performance of a Canadian Work, singing R. Murray Schafer's "Chant to Bring Back the Light." In 2003 the choir was a finalist in the Let the Peoples Sing international choral competition.