Chloe Cooley was one of hundreds of Black women enslaved in the French and British colonies that became Canada. Although little is known about Chloe Cooley, who was enslaved in Upper Canada, her struggles against her enslaver, Sergeant Adam Vrooman, precipitated the Act to Limit Slavery in Upper Canada of 1793. The Act was the first legislation in the British colonies to restrict the slave trade. (See also Black Enslavement in Canada.)

Chloe Cooley was one of hundreds of Black women enslaved in the French and British colonies that became Canada. Although little is known about Chloe Cooley, who was enslaved in Upper Canada, her struggles against her enslaver, Sergeant Adam Vrooman, precipitated the Act to Limit Slavery in Upper Canada of 1793. The Act was the first legislation in the British colonies to restrict the slave trade. (See also Black Enslavement in Canada.) Click here for definitions of key terms used in this article.

Chloe Cooley was a Black woman enslaved in the Niagara region of Upper Canada during the late 18th century (see Black Enslavement in Canada; Black Canadians). Although little is known about her, there are some pieces of her story that can be put together. Cooley was first enslaved by Benjamin Hardison of Bertie Township (now Fort Erie, Ontario), a farmer, miller and member of the Legislative Assembly. She was likely forcefully relocated to Bertie Township at the end of the American Revolution. Some time before 1793 Hardison sold Cooley to United Empire Loyalist Sergeant Adam Vrooman — a resident of Queenston, Upper Canada (see Loyalists in Canada). Like many Black women enslaved in colonial Canada, Cooley would have worked as a domestic servant in both the Hardison and Vrooman households.

Her forced labour at the Vrooman residence in Queenston (the west landing) would have included taking care of the first five Vrooman children of Vrooman and his wife Margaret DePeyster Mattice Vrooman - Rachel, Solomon Secord, Adam DePeyster, Arent Schuyler DePeyster, and George Laws. Cooley would have also completed a range of household chores such as cooking, washing laundry, making soap, candles and preserves, churning butter, and harvesting crops and tending to the farm animals for the kitchen.

Vrooman enslaved at least one other person, a Black man named Tom. Tom was in Vrooman's possession in 1783 and Vrooman sold Tom to Adam Krysler in 1792, seven months before the Cooley incident.

What is known today about Chloe Cooley is because of the documentation of her violent sale by Vrooman across the Niagara River into New York on 14 March 1793. This incident was reported to the Executive Council of the Parliament of Upper Canada in Newark (now Niagara-on-the-Lake, Ontario). On that fateful day, Vrooman violently tied Cooley up with a rope. Vrooman was assisted by two other men — his brother Isaac Vrooman and one of the five sons of United Empire Loyalist McGregory Van Every. The three men put Cooley in a boat and transported her across the Niagara River to sell her into New York State. Cooley resisted fiercely, but to no avail. Her piercing scream alerted Peter Martin, a Black Loyalist formerly enslaved by John Butler, to what was transpiring.


Martin witnessed Chloe’s struggles and heard her screams. He, along with another witness William Grisley, a white man who worked as a labourer for Vrooman and was a resident of nearby Mississauga Point, reported the incident to Lieutenant-Governor John Graves Simcoe and other members of the Executive Council. Grisley was able to provide a detailed account of the events as he was on the boat that transported Cooley but did not assist in restraining her.

This was not the first time Cooley resisted her bondage and the authority of her enslaver. According to Vrooman, she regularly protested her enslavement by behaving in “an unruly manner,” stealing property entrusted to her on his behalf, refusing to work and engaging in truancy (leaving her enslaver’s property without permission for short periods of time and then returning).

The Act to Limit Slavery in Upper Canada

At the time of the Chloe Cooley incident, whispers of abolition and freedom circulated in the Niagara area among white settler enslavers and enslaved Black people alike ( see Black Enslavement in Canada). These rumours pushed Vrooman and other colonists who held property in slaves to liquidate their chattel property rather than suffer a financial loss should the reports prove true. William Grisley further testified that he saw another Black person bound in the same manner as Cooley and also mentioned the fact that other enslavers planned to sell their slaves in the United States.

Lieutenant Governor John Graves Simcoe and Attorney John White wanted to put an end to the violent removal of enslaved people outside of the province and used the Chloe Cooley incident to introduce a law to abolish slavery in Upper Canada. Simcoe had begun planning to introduce legislation prior to that day. Within a few weeks, the Attorney General filed charges against Vrooman for disturbing the peace in the Court of Quarter Sessions held at Newark. On 18 April 1793, Vrooman responded to the charges in a petition in which he stated that he had:

[...] been informed that an information had been lodged against him to the Attorney General relative to his proceedings in his Sale of said Negroe Woman; your Petitioner had received no information concerning the freedom of Slaves in this Province, except a report which prevailed among themselves, and if he has transgressed against the Laws of his Country by disposing of Property (which from the legality of the purchase from Benjamin Hardison) he naturally supposed to be his own, it was done without knowledge of any Law being in force to the contrary.


This petition confirms that a charge (called “an information”) was filed against Vrooman as the Executive Council had recommended. Additionally, Vrooman identified from whom he purchased Cooley, which gives credence to the legality of the buying and selling of slaves in Upper Canada. Lastly, Vrooman’s petition reveals that he provided a defence of ignorance to his sale of Cooley, stating that he did not break the law. According to Vrooman, he was well within his legal rights, as Cooley was his property. The charges against Vrooman were dropped. Cooley and other enslaved Black persons in the province were considered chattel (personal property) and did not have any rights to defend themselves in court. 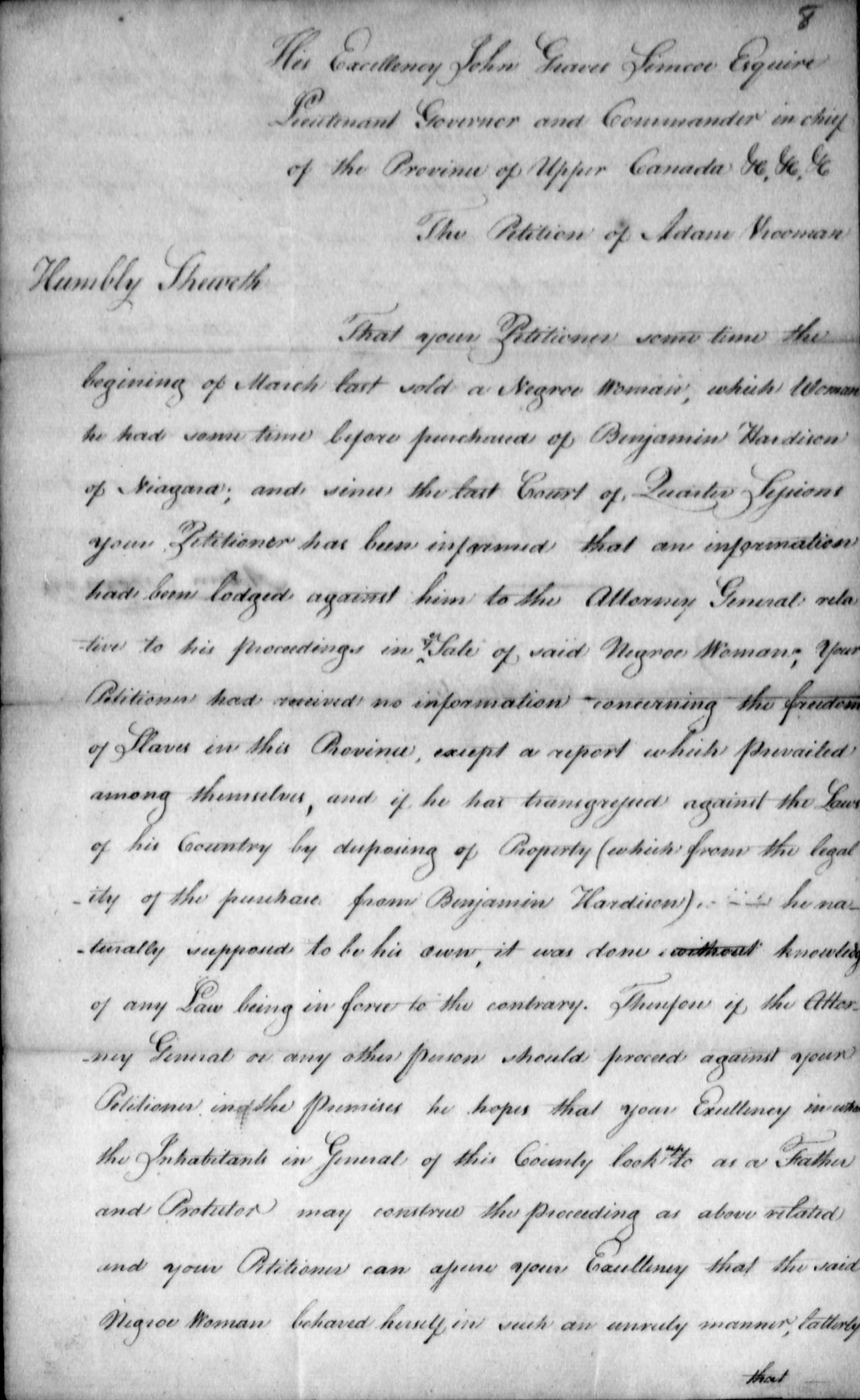 Two months later, Simcoe and White introduced legislation to abolish slavery in Upper Canada. On 19 June 1793, Attorney General John White proposed an abolition bill to the House of Assembly. The bill received opposition, because from between 1792 and 1816, several colonial officials and politicians enslaved Black people in the province. The Provincial Secretary William Jarvis enslaved six people. From the First Parliament of Upper Canada through to the Sixth Parliament of Upper Canada, three members of the Executive Council, 10 members of the Legislative Council, and 20 members of the Legislative Assembly held property in slaves. Three politicians came from direct ancestors (father or grandfather) who enslaved Black people in Upper Canada.

The result of Simcoe and White’s abolition bill was a compromise and the bill was amended. Following the revision, the legislative assembly passed An Act to Prevent the further Introduction of Slaves and to limit the Term of Contracts for Servitude (also known as the Act to Limit Slavery in Upper Canada). Simcoe gave the bill Royal Assent on 9 July 1793. The Act did not free any enslaved persons in the province. At the outset, it confirmed and validated the institution of slavery. The Act prohibited the importation of enslaved persons into Upper Canada but did not outlaw the sale of slaves within the province or across the border into the United States. It laid the foundation for gradual abolition, ending slavery after twenty-five years. The new law stipulated responsibilities for enslavers upon manumission (freedom from enslavement) and encouraged former enslavers to employ their former slaves as indentured servants.

Little is known about Chloe Cooley’s early life or where she went after March 1793. Still, her plight is a testament to the struggle of enslaved Black persons in Canada and the Atlantic World and the various ways in which they resisted their servitude. Although a Black woman without any citizenship status or rights, Cooley left an indelible mark on Canadian history. She was one of over two hundred Black women enslaved in Upper Canada, one of few that is known. Cooley’s struggle against her enslavement and imminent sale garnered attention that contributed to the passage of the Act to Limit Slavery. The Act was the first piece of legislation in the British colonies to restrict the slave trade and it changed the trajectory of life for the generations of people of African descent that followed.

For her courageous act of resistance, Chloe Cooley was designated a person of national historic significance by the Government of Canada in 2022.

Chattel Slavery – In chattel slavery a Black person is treated like personal property that can be bought, sold or inherited. (See also Black Enslavement in Canada.)

Indentured Servant – A person who is contracted to work in order to repay a debt.