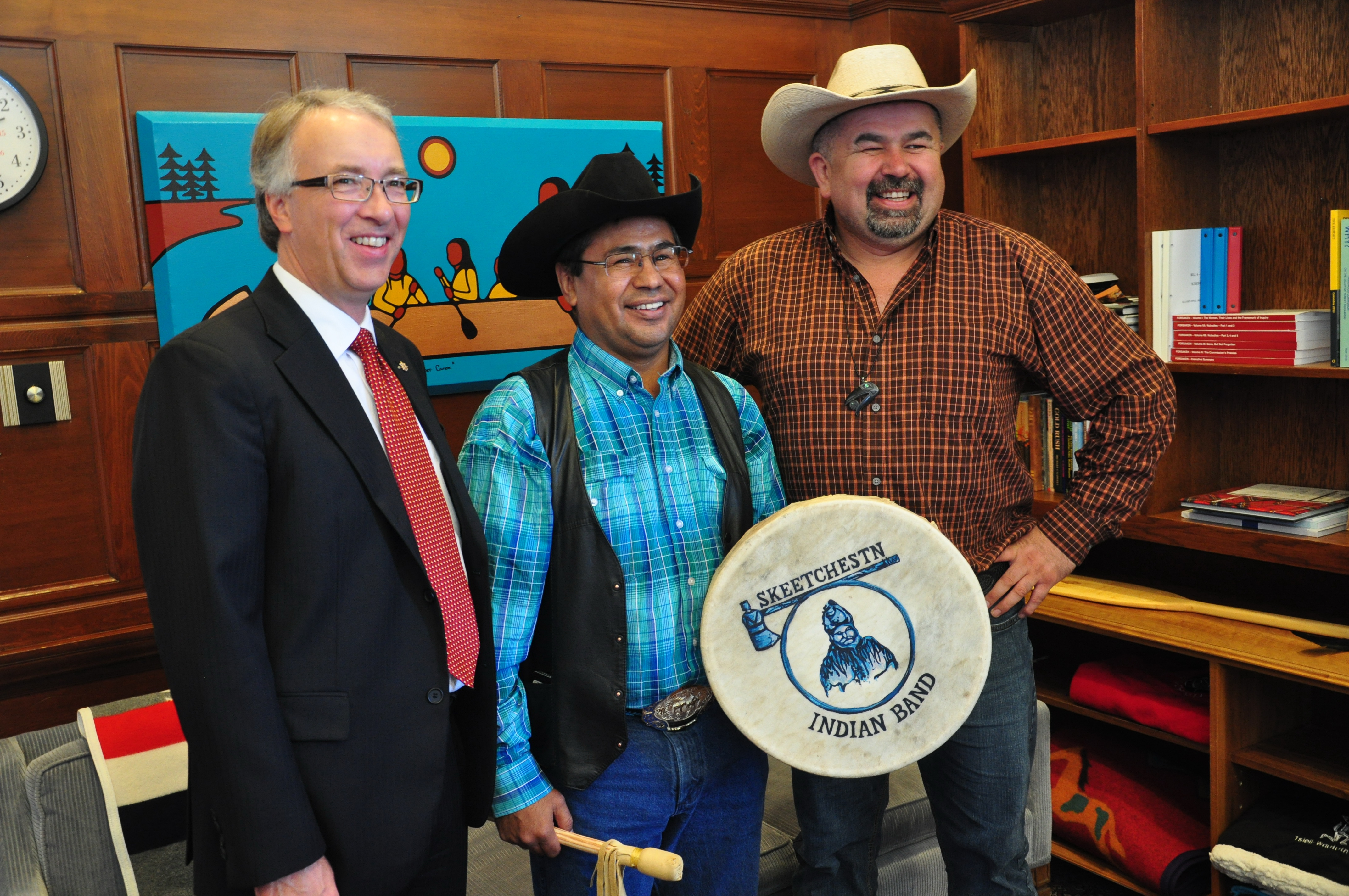 John Rustad, Minister of Aboriginal Relations and Reconciliation, shares a smile with Tsilhqot'in tribal chair Chief Joe Alphonse (left) and vice-chair Chief Roger William (centre). Alphonse and William were guests of the legislature on Thursday when Premier Christy Clark apologized on behalf of British Columbia for the wrongful hanging of six Tsilhqot’in war chiefs in 1864 and 1865. William borrowed a drum from the minister’s office to sing a traditional song about the Tsilhqot'in War and the hanging of the six chiefs by colonial authorities.

The traditional territory of the Tsilhqot'in includes most of the drainage of the Chilcotin River and the headwaters of the Homathko, Kliniklini and Dean Rivers flowing westward through the Coast range in British Columbia.

According to the Province of British Columbia, the Tsilhqot’in population numbers over 3,000 people. In the 2016 census, 2,805 people of the Indigenous population reported Tsilhqot’in ancestry.

Through most of the 19th century, the Tsilhqot’in were organized into autonomous bands. However, through much of the year, families moved about independently hunting, fishing and gathering roots and berries. There were leaders, some of whom were forceful, but the society was basically egalitarian and individuals and their families valued their autonomy. In late summer, most families gathered along the rivers to fish the salmon runs. In mid-winter, they moved to sheltered locations, usually near lakes suitable for ice fishing, where they lived in shed-roofed homes or pit houses. (See also Architectural History of Indigenous Peoples in Canada.)

The Tsilhqot'in traditional culture is similar to that of other Northern Dene peoples. Drumming, storytelling and community celebrations feature prominently in Tsilhqot’in cultural life.  Protection of the environment and of nature is also important to Tsilhqot’in culture; currently  the Dasiqox Tribal Park, an area managed by the Tsilhqot’in to integrate traditional ways of life, is home to the Nation.

In 1808, Simon Fraser was the first European to encounter Tsilhqot'in, in Secwepemc territory along the west bank of the Fraser River. The Hudson’s Bay Company established an outpost in Tsilhqot'in territory in 1827, which was staffed intermittently until 1844. The Tsilhqot'in resented the presence of these strangers in their territory, and the post was not particularly successful. The Tsilhqot'in had little contact with the influx of gold miners along the Fraser River in 1859–60, but they did suffer heavy population loss in a  smallpox epidemic shortly thereafter.

In 1861, a pack-train trail was established from the Bella Coola Valley through Tsilhqot'in territory to the developing gold mine centres to the east, and work was begun on a wagon road from Bute Inlet to the interior. Resisting these intrusions, a small group of Tsilhqot'in killed several workers on this road in what is known as the Chilcotin War of 1864. Six Tsilhqot'in were eventually tried and executed for these killings. On 26 March 2018, Prime Minister Justin Trudeau exonerated the Tsilhqot'in chiefs of any wrongdoing, and on 2 November 2018, Trudeau formally apologized.

Shortly after, settlers began to establish farms and ranches west of the Fraser River. In 1882, Father Morice, also a historian and linguist, commenced missionary work among the Tsilhqot'in. Reserves were created for the various bands between 1887 and 1904. Prior to this, the Tsilhqot'in had begun small-scale ranching and farming while continuing their traditional subsistence activities.

The case, officially known as Tsilhqot’in Nation v. British Columbia, stemmed from a commercial logging licence on Xeni Gwet’in territory granted by the British Columbia government in 1983. After a blockade, negotiations began but were derailed over the Tsilhqot’in desire for the right of first refusal to logging activities. After talks broke down, the Tsilhqot’in amended their original claim to include Aboriginal title in 1998. (See alsoForest Harvesting.)

Justice David Vickers of the Supreme Court of British Columbia ruled in favour of the Tsilhqot’in on 20 November 2007, only to have the judgement overturned on appeal in June 2012. On further appeal, the Supreme Court of Canada agreed with Vickers that the land had been both continually occupied and defended for the exclusive use of the Tsilhqot’in and that the government’s appeal had been based on the “erroneous thesis that only specific, intensively occupied areas can support Aboriginal title.”

The ruling is significant in that it clarified the requirements for establishing Aboriginal title. The criteria for Aboriginal title are threefold, in short: an Indigenous group must first prove occupation, and then must prove continuity and exclusivity of said occupation.

During most of the 20th century, the Tsilhqot'in combined traditional subsistence activities with work in the local economy, notably as ranch hands, but also in guiding and in the trapping industry. Logging and the decline in the natural resources that the Tsilhqot'in traditionally utilized have made adherence to traditional ways increasingly difficult. Despite this, Tsilhqot'in retain a strong sense of social and political identity, as they continue the struggle to maintain their Indigenous rights and to negotiate for self-government.