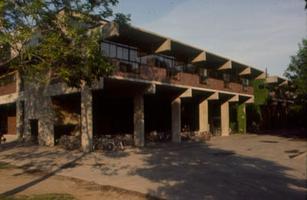 The School of Architecture at Carleton University was one of many small institutional and residential projects designed by Carmen and Elin Corneil in the 1960s (photo by Helmut Schade, courtesy Library and Archives Canada/Multimedia and Special Collections).

Carleton University, Ottawa, Ontario, founded in 1942 as Carleton College to provide elementary university courses in the evening for government employees. The return of WWII veterans led to day courses and in 1946 the college acquired a building on First Avenue. Degree programs were established in arts, science, public administration and journalism, although the college did not receive a provincial charter until 1952. It officially became a university in 1957 and moved to its present site on the Rideau River in 1959.

It is governed by a president, a board of governors and a senate. A. Davidson Dunton presided over the phenomenal growth of the university between 1958 and 1972, with enrolment rising from 1000 to 7000 full-time students.

By the end of the 1960s Carleton was offering degrees in engineering, architecture, industrial design and social work. The 1970s was a decade of consolidation, with steady growth in enrolment despite financial constraints. It now offers undergraduate and graduate degree programs in the faculties of arts, social sciences, engineering, science, public affairs and management, and through many professional schools and institutions. Enrolment is approximately 13 000 full- and 4500 part-time students. Carleton is a publicly supported institution.