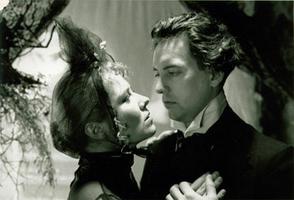 Probably the only Canadian film to date which models itself on the German mountain film genre of the early 1930s, Careful is a tale of incest and betrayal in the snow-covered town of Tolzbad, where the slightest noise may trigger an avalanche. Among the residents of the town are a youthful widow, Zenaida (Gosla Dubrowolska), and her three sons, Grigorss (Kyle McCulloch), Johann (Brent Neale) and Franz (Vince Rimmer). Grigorss and Johann are both studying to become butlers, hoping to find employment in the castle occupied by the local count. Although engaged to be married, Johann is unable to overcome an erotic attachment to his mother, and kills himself after having molested her while she sleeps. Grigorss completes butler school and goes to work for the count, discovering that his mother and the count had been romantically involved in their youths. The count and Grigorss's mother renew their romance, but Grigorss cannot bear this, and challenges the count to a duel. In the film's climax, the count is killed, Grigorss's mother kills herself, and Grigorss himself is frozen to death in a mountain avalanche.

Like Guy MADDIN's previous features, Careful has been admired for its painstaking reconstruction of the styles and traditions of forgotten moments in film history. Although the film evokes the kitsch worlds of early sound film operetta and children's fantasy book illustration, its principal thematic concerns - incest and sexual longing - are hardly frivolous. The film's prologue describes a world in which life is fragile, lived amid the constant threat of avalanches and the dangers of slippery slopes. The inhabitants of Tolzbad are reminded, over and over again, to be careful, to live lives of self-restraint and inexpressivity, since the most mild of gestures or sounds may disturb the snow and ice around them. Careful explores the tension between the propriety required of Tolzbad's townspeople and the passions and frustrations which drive virtually all of the film's major characters to their tragic ends.