CANLOAN was a volunteer program that loaned Canadian officers to the British Army during the Second World War.

CANLOAN was a volunteer program that loaned Canadian officers to the British Army during the Second World War. 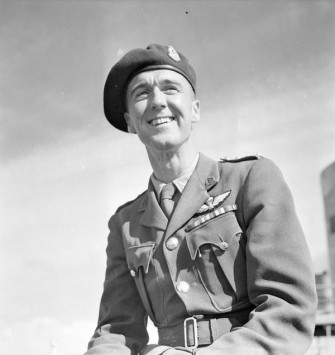 Captain Ashton Kerr, a CANLOAN medical officer who served with the British 1st Airborne Division aboard SS Nieuw Amsterdam en route to Canada for a 30-day leave in Montreal. 12–16 September 1945.

CANLOAN was a volunteer program that loaned Canadian officers to the British Army during the Second World War. The scheme began in late 1943. At that time, the British Army was fighting on a number of fronts and had a shortage of junior officers. In contrast, the Canadian Army had a surplus. Canadian units were only fighting on one front (in Italy) and two Home Defence divisions had been disbanded, leaving many trained officers waiting for active duty.

In total, 673 Canadian officers volunteered for service with British regiments. This included 623 infantry officers and 50 ordnance officers. The majority were junior officers (lieutenants), although some captains also volunteered for service through the program. CANLOAN officers were primarily involved in the 1944–45 campaigns to liberate northwest Europe, although some also served in Italy and southeast Asia. (See Canada on D-Day: Juno Beach, D-Day and the Battle of Normandy, Battle of the Rhineland, Liberation of the Netherlands, The Italian Campaign, VE-Day: Victory in Europe.)

The casualty rate for CANLOAN officers was high (69 percent). By the end of the war, 128 CANLOAN officers had been killed, out of a total of 465 casualties. In 1961, Governor General Georges P. Vanier unveiled the CANLOAN Memorial in Ottawa’s Stanley Park, on the banks of the Ottawa River.