Canadians Do Business in Cuba

This article was originally published in Maclean’s magazine on January 15, 1996. Partner content is not updated. 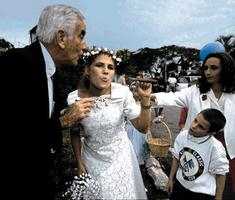 Filmmaker Paris jokes with his daughter on her wedding day. Canadians are leading the way as Cuba opens up to foreign business (courtesy Maclean's).

Wally Berukoff doesn't much like the press. His favorite saying goes something like: "You make yourself a target, people shoot at you." He would therefore prefer that his tale be left untold. But the fact is that when Cuban President Fidel Castro landed in Berukoff's corporate base of Vancouver on Dec. 14 for what seemed a routine refuelling stop en route to Havana, Berukoff met with the veteran leader in the Delta Vancouver Marina and Airport Hotel - for four hours.

The discussion, says Berukoff, was not exclusively about business. But it is Berukoff's business in Cuba that makes him so intriguing. In the wake of the Soviet exit from Cuba, and with American trade still stymied by a long-standing embargo, the island has become a hot spot for Canadian entrepreneurs on the prowl. "The Canadians," says Gareth Jenkins, head of the Cuba Business Ltd. consultancy in London, "were really the pioneers." Ian Delaney, Toronto-based chief executive officer of Sherritt Inc., was the first, in 1991. Roughly 40 Canadian companies have opened offices in Cuba since. The Canadian Embassy in Havana counts 17 joint ventures that have been signed between Canadian companies and various state agencies, and 20 more under negotiation. But those numbers include only those firms that have informed the embassy of their activities. There may be many more.

Cuban authorities claim that foreign investors so far have anted up nearly $3 billion. That includes the slew of non-Canadians who have also moved in, from the Mexicans to the Spanish to the Dutch. But the $3 billion does not reflect future financial commitments pledged by the likes of Wally Berukoff - who appears to be in like Flynn.

Just last September, Berukoff had cocktails with Castro and former prime minister Pierre Trudeau at the Canadian Embassy in Havana. The schmoozing was on behalf of York Medical Inc., a virtually unknown Toronto company that recently acquired the licences to five Cuban pharmaceuticals. York Medical has contracted to ensure the medications meet U.S. Food and Drug Administration standards and to license the marketing rights to drug companies. Trudeau, says Diane Kalina, York Medical's chief operating officer, acted as an adviser to the company in the early stages and provided the entrée to Castro. Berukoff has put $400,000 behind York Medical.

Back in Vancouver, Berukoff runs Miramar Mining Corp., which owns the Con gold mine in the Northwest Territories. Through Miramar, Berukoff is exploring two mining prospects in Cuba, a copper-gold project on the western end of the main island, and a gold deposit on the Isle of Youth, 85 km south into the Caribbean Sea. Another Berukoff company, Wilton Properties Ltd., has signed joint-venture agreements with Cuban hotel developer Grand Caribe to develop 11 hotels, from Havana to the Isle of Youth to Paradise Beach on neighboring Cayo Largo, which will feature the requisite five-star amenities: golf courses, equestrian facilities, tennis clubs and health spas. He figures he is one of the largest investors in Cuba, a veritable one-man merchant bank. "I'm putting in $100 million [U.S.] in 1996," he says, and his various enterprises will, he asserts, commit a further $800 million (U.S.).

Berukoff has been scouting Cuba since 1992. Much has changed in the interim. From his home in Havana, Berukoff can now dial Pizza Nova at suburban Marina Hemingway and have a large pie delivered by scooter. Sam Primucci, who runs the Pizza Nova chain from its Toronto headquarters, will open his third outlet, a kiosk at the popular beach resort of Varadero, on the island's north coast, this week. A slice and a Coke - shipped in from South America - will cost $2, in U.S. currency only, please. Every month, Pizza Nova ships a container out of Toronto headed for Havana, freighted with flour, cheese and pepperoni. Primucci, who struck his joint-venture pizza deal with Cubanacan, the Cuban tourist agency, in 1994, plans to open another four locations in Cuba this year. He says business is very good, coming from the embassy district, the mooring yachts from Miami, and the tourists staying at the adjacent Old Man and the Sea Hotel, managed by Delta Hotels & Resorts of Toronto, which also manages four Cuban resorts.

Meanwhile, a lode of Toronto-based junior Canadian mining companies, from Holmer Gold Mines Ltd., to MacDonald Mines Exploration Ltd. to CaribGold Resources Inc., have signed joint ventures and are at various stages of feasibility assessments on mining prospects, an obvious move given Cuba's rich resource base. Less obvious are the deals involving private enterprises such as York Medical. "The only reason any of us are there," says David Allan, chairman of York Medical, "is because of the embargo." The Saskatchewan government, through Saskatchewan Opportunities Corp., has invested $250,000 in the York venture. As far as Saskatchewan economic development minister Dwain Lingenfelter knows, this is the first deal to commercialize Cuban pharmaceuticals for sale in the developed world. Later this month, Saskatchewan will begin diagnostic trials for Cuban antibiotic testing equipment, also part of the York Medical deal, at St. Paul's Hospital in Saskatoon.

This is not capitalism redux. The Cuban government, and Castro in particular, have stressed that they are cautiously steering their economic reforms as a mechanism to strengthen and defend socialism. There will be no casinos, they say. Any other limitations are not clear. Berukoff professes some concern about all the entrepreneurial activity, citing the disastrous free-for-all in Moscow after the collapse of the Soviet Union in 1989. "We all look the same to the Cubans, the carpetbaggers versus those who do business the way they say they can," he says. Nor do the best business credentials guarantee success. Calgary-based Canadian Fracmaster Ltd. disbanded its Cuban operations last month, three years after setting up shop in Havana and Varadero to supply pumping equipment to what the industry hoped would be a booming oil-and-gas play. "It was a great disappointment," says Gene Trottier, Fracmaster's manager of corporate finance. "The industry is just too small." He will not say how big the company's losses were. "We didn't bleed for three years," he says.

The greatest success story still, and Canada's biggest corporate test case, is Ian Delaney and Sherritt. Initially, Delaney's proposal was simple enough: he needed nickel to feed his refinery at Fort Saskatchewan, Alta. Cuba has, literally, tons of the stuff. So the Cubans started shipping their nickel north. Delaney knew he was in for a political ride - Sherritt was selling more than half of its refined nickel into the United States at the time. Nevertheless, he thumbed his nose at the American embargo and found new markets. In December, 1994, Sherritt and the government of Cuba jointly created the Metals Enterprise. Sherritt and Cuba's General Nickel each hold 50 per cent of, chiefly, Moa Nickel, which mines and processes the metal on the east end of the island, and the Fort Saskatchewan refinery. The anti-Castro alliance was outraged. In June, 1995, Delaney found himself on a U.S. treasury department blacklist. Labelled a "specially designated national," he now keeps company with Libya's Moammar Gadhafi.

As Delaney's relationship with Cuba and Castro grew to near-mythic proportions, the Canadian entrepreneur planned the creation of Sherritt International Inc., a publicly traded company to hold Sherritt's nickel, cobalt, and oil-and-gas interests, and its Cuban aspirations. Tagged on to the new company's prospectus is a letter from Carlos Lage Davila, secretary of Cuba's Council of Ministers, or, as Delaney calls him, the country's chief operating officer. In it, Lage says that Sherritt International "will be offered for negotiation a diversity of investment opportunities in Cuba that may include, among others, areas such [as] communications, transportation, real estate, finance and sugar." The model Delaney used to explain his vision to a Cuban cabinet subcommittee was Canadian Pacific.

That sounds like a lofty goal. But Delaney, who controls the new company through multiple voting shares, is not a man of modest ambition. "I can play poker with the cards face up and I'm still going to win." That suggests, he allows, "an arrogance on my part."

Sherritt International today is probably the largest single foreign investor in Cuba, with $650 million in assets and cash, which is enormous in Cuban terms. The investment by Grupo Domos, the Mexican telecommunications company, in Cuba's telephone company was larger, but Mexico sold 25 per cent to the Italians and, it appears, is in arrears on payments to the Cubans for the balance.

Other major foreign investors have anted up, or are poised to do so, such as Western Mining of Australia. But those tend to be single-sector investors. "There's an opportunity for a well-received company to make preemptive, cross-industry investments in Cuba," says Jim Whisenand, a Miami attorney and publisher of the monthly Cuba Report. For the moment, it looks as though that opportunity will be seized by Delaney.

In his Toronto office, in front of a picture of his two boys and wife, Kiki, with Castro, his locked humidor sitting under a box of Monte Cristos and a box of Bolivars, Delaney presents perhaps the most pointed assessment of Cuba of any Canadian business leader. "The whole country had an economic lobotomy," he says. "This country's been on holiday for 35 years." Now, he says, "they're throwing an economy into the jaws of the market."

On a micro level, says Delaney, the Sherritt-led changes at Moa have achieved an 80-per-cent improvement in productivity. It did not take much: small amounts of money, spare parts, focusing responsibility, tuning the process - and topping up Cuban peso wages with incentive payments in U.S. dollars. Says Delaney of the transformation: "Talk about scales falling off eyes."

Still, the Cubans are achingly poor. The Canadian mining outfits commonly pay about $2,700 a month to Geomanera, the state mining authority, on behalf of each of their Cuban geologists, who in turn receive around 350 Cuban pesos ($19). While five pesos can buy a ration of milk or rice, the converted monthly wage will not buy much of Sam Primucci's pizza. The wage issue makes Canadian operators defensive. MacDonald Mines CEO Frank Smeenk points to the value of "the lifetime security, the medical and educational benefits, university education, if you want it, retirement at 65." If the grassroots Canadian players like Smeenk are successful - and he thinks he has a fabulously rich gold deposit on his hands - and if the Cubans can come up with half of the capital costs to take new mines into production, the state will reap half the profits.

Then, presumably, investment will make its way to the guts of the economy - infrastructure, roads and bridges. According to Delaney, capital will be found. The carpetbaggers will be sorted from the certifiable players. The U.S. embargo will end. Cuba will only benefit from integration with Western markets. Then he says what he has said many times before: "They'll end up with a regulated market economy and they'll call it Canada."