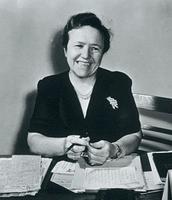 Whitton founded the Canadian Welfare Council and was mayor of Ottawa when this picture was taken in 1951 (courtesy Library and Archives Canada/PA-121981).

These name changes reflected the ever-expanding scope of issues addressed by the Council. From a singular emphasis on children and the well-being of families, the focus shifted to the broader purview reflected by the terms "welfare" and "social development."

Over the years, the CCSD and its predecessors have played an important role in helping to shape many of Canada's social programs, such as old age security, unemployment insurance, Canada Assistance Plan, child welfare, tax credits for the working poor and medicare. More recently, the problems of women and Aboriginal peoples have increasingly gained its attention.

The Canadian Council on Social Development is an independent, national, non-profit organization with a membership base consisting of federal and provincial government departments, municipal governments, corporations, foundations, unions, and concerned individuals. Sources of funding include research contracts, the sale of publications and memberships, and donations. Its mission is the development and promotion of "progressive social policies inspired by justice, equality and the empowerment of individuals and communities." This is carried out through research, consultation, public education and advocacy.