The Auto Pact was a compromise agreement between Canada and the United States, triggered by Canadian efforts to deal with chronic trade and current account deficits in the early 1960s. Building a more competitive automotive industry was seen as a crucial part of the solution to Canada’s troubled economy. Canada was running a persistent automotive trade deficit with the United States in finished vehicles and in auto parts at the time, and had little prospect of attracting investment and building a stronger industry to create jobs and reduce the trade deficit without government intervention.

In 1964, Canada had a roughly $600-million auto trade deficit with the United States. Canada was producing about 7 per cent of Canada/US auto output, but accounted for less than 1 per cent of US sales around this time.

The fundamental problem was that Canada’s auto industry was highly inefficient. The subsidiaries of US companies, operating in Canada behind a high tariff wall, assembled a wide range of different models in Canada at production levels insufficient to achieve the economies of scale needed for commercial success. They had been set up as branch plants not only for the Canadian market, but to take advantage of earlier trade preferences with the British Commonwealth, which had by then lost much of their value. There was no incentive to invest in Canada. Productivity was about 60–65 per cent of US levels, and industry wages were about 70 per cent of US levels. Meanwhile, Canadian consumers paid much higher prices for automobiles and had less choice than their American neighbours.

Fearful of a declining auto industry and worried about the trade deficit, the government of Prime Minister John Diefenbaker had in 1960 appointed Vincent Bladen, a University of Toronto economist, to study the industry. In his report, Bladen rejected free trade as a solution because, he argued, Canadian industry was unprepared and would be much diminished. He also rejected higher tariffs as counterproductive. Instead, Bladen proposed measures to increase Canadian content in auto products by allowing companies to import vehicles and parts duty-free, provided they met Canadian content requirements.

As a result, in 1962 Canada re-imposed a 25 per cent tariff on imported automatic transmissions while at the same time introducing a duty-remission scheme that would allow auto companies to offset tariffs on imported transmissions and engine blocks, by increasing the export of Canadian-made auto parts — an incentive designed to boost Canadian production. In 1963, the newly elected government of Prime Minister Lester Pearson strengthened the arrangement, extending the duty-remission scheme to vehicles and all original parts. The scheme proved effective. The goals were to boost Canadian output and employment, reduce the trade deficit and create opportunity for Canadians to gain access to markets, as well as encourage specialization, longer production runs and lower costs.

But Canadian policy was challenged by a US auto parts company that had lost business under the scheme. With support from other US auto parts companies, it quickly sought a ruling by the US treasury department on whether this was a subsidy under US law. The fear, in both countries, was that the Canadian scheme would be found to be an illegal subsidy, thus risking a trade conflict that neither country, nor the industry, wanted. The United States delayed investigating and publishing a finding on the complaint, since Canada was expected to lose the case. A finding was never published.

After intensive diplomatic negotiations through the summer and fall of 1964, the two countries reached a compromise agreement. The resulting Auto Pact was a managed trade agreement that limited which companies could benefit, and imposed ongoing conditions or safeguards to ensure growth of the industry in Canada. The Americans had sought a free trade agreement, but Canada wanted an agreement with safeguards. A pure free trade agreement, Canada argued, would lead to a much diminished auto industry in Canada since all the key investment and production decisions would be made in the United States.

The agreement was signed at the LBJ Ranch in Johnson City, Texas, on 16 January 1965 by President Lyndon Johnson and Secretary of State Dean Rusk for the United States, and Prime Minister Lester Pearson and External Affairs Minister Paul Martin Sr. for Canada.

It was a short document that sought “the creation of a broader market for automotive products within which the full benefits of specialization and large-scale production can be achieved.” The overarching goal, it said, was “the development of conditions in which market forces may operate efficiently to attain the most economic pattern of investment, production and trade.”

Products had to have 50 per cent Canada/US content to qualify. The agreement applied to cars, trucks, buses and original automotive parts, but excluded aftermarket auto parts, batteries, tires and used cars.

The agreement also contained two annexes, both written by Canada. These limited participation in the Auto Pact to auto assemblers already producing in Canada in the period August 1963 through July 1964 — notably including General Motors, Ford, Chrysler, American Motors (acquired by Chrysler in 1987), Studebaker (ceased production in 1966) and Volvo (a small operation in Halifax that closed in 1998). They also set a minimum level of Canadian value added that assemblers had to achieve. And they effectively required that for every vehicle sold in Canada, a vehicle must be produced in Canada.

There was opposition in both countries, though for far different reasons — in Canada because it was not seen as doing enough to create a Canadian auto industry, and in the United States because it strayed from free market principles.

In 1965, the year the Auto Pact came into effect, Canada had a $785-million automotive trade deficit with the United States. The impact of the agreement was swift — Canada’s share of North American auto production rose from 7.1 per cent in 1965 to 11.2 per cent by 1971, and by 1970 Canada had achieved a modest trade surplus.

But the Canadian surpluses became a major irritant in the United States. The American view was that the safeguards Canada maintained on the production/sales ratio and value-added minimums were meant to be temporary, while Canada insisted they were permanent. The US took the view that, as the agreement said, the goal was a free market system, while Canada pointed to another clause that said the goal of the agreement was to enable both countries to participate “on a fair and equitable basis” in an expanding North American market.

In 1970, the US Senate Finance Committee asked the president to achieve “complete freedom of trade” in the industry by 1973. In 1971, six years after the Auto Pact came into effect, the US took drastic action to deal with its own balance of payments crisis, and the administration of President Richard Nixon came within a hair’s breadth of cancelling the agreement. It was only saved by swift action on the part of a US official who caught sight of a draft document cancelling the Auto Pact.

The US continued to chafe at Canadian safeguards in the agreement. In July 1975, the Senate Finance Committee asked the US International Trade Commission (ITC) to determine whether or not Canada had “fully complied with the letter and spirit of the Agreement by phasing out so-called ‘transitional provisions.’” The ITC concluded Canada had not.

Despite these disagreements, automotive trade between the two countries skyrocketed. In 1966, Canadian vehicle and parts exports to the US totalled $886 million. In 1977, exports were $9.9 billion. Similarly, Canadian imports from the US grew from $1.5 billion in 1966 to $10.9 billion in 1977. The US trade surplus, which over the life of Auto Pact moved back and forth from surplus to deficit, grew from $601 million in 1966 to $1.1 billion in 1977 — although Canada had surpluses in some of the intervening years. 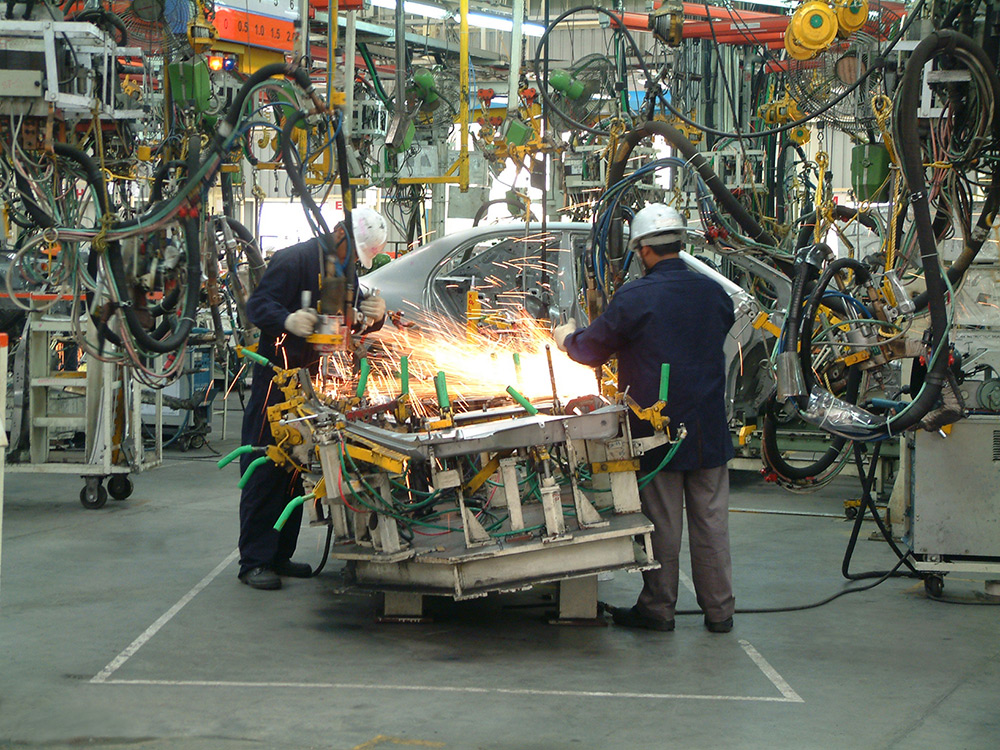 Through the life of the Auto Pact, Canada tended to have surpluses in vehicles and deficits in parts. In 1977, for example, Canada had a surplus of $2 billion in vehicles, a deficit of $3 billion in parts. In 1977, Canadian value added in vehicles and parts was five times greater than in 1964. By 1975, the industry directly supported more than 100,000 Canadian middle-class jobs. The auto sector had become Canada’s most important export industry.

Since Japanese companies could not join the Auto Pact, Canada attracted Japanese companies by offering duty-remission incentives, which tied the ability to import vehicles duty-free to exports to the United States and elsewhere from Canadian-based assembly plants. The United States was concerned that Japanese automakers would build plants in Canada to serve the US market. So in Canada-US free trade negotiations in the 1980s, the US had two objectives — the adoption of automotive free trade with the elimination of Auto Pact conditions, and the elimination of Canada’s duty-remission incentives.

While the 1989 Canada-US Free Trade Agreement (FTA) still retained the Auto Pact’s Canadian safeguards, Canada agreed to phase out its duty-remissions scheme. In addition, the two countries agreed to phase out tariffs on cross-border trade in new vehicles and parts by non-Auto Pact producers over 10 years, starting in 1989. This meant that vehicles of Asian and European companies made in North America had the same free trade privileges as the original participants in the Auto Pact, provided they met the 50 per cent North American content requirement set out in the FTA (later raised to 62.5 per cent).

With the FTA and later the North American Free Trade Agreement (NAFTA), the Auto Pact became less important in determining industry investment, though it was seen as an important irritant by Asian and European automakers because of the preference it gave to the US industry.

In 1994, Canada implemented the global rules of the World Trade Organization (WTO) Uruguay Round, which, as it happened, provided the basis for ending the Auto Pact. Both Japan and the European Union contended that key features of the Auto Pact were inconsistent with global trade rules, and they won this argument before the WTO’s dispute settlement panels. On 19 February 2001, Canada officially ended the Auto Pact.

The cancellation was barely noticed. By that time, Canada’s auto industry was operating far above the production/sales ratio and the minimum value-added requirements of the Auto Pact. It had been a creature of its times, and those times had changed once Asian and European automotive companies had become major investors in North America.

Nonetheless, the Auto Pact had been important for several reasons. It had helped launch a much more competitive auto industry in Canada, which had a major impact on middle-class job creation, productivity and trade performance; it had triggered and sustained an economic boom across southern Ontario; it had spawned several Canadian-headquartered global auto parts companies such as Magna International and Linamar; it had integrated the industry on both sides of the border, narrowing the price gap between cars in Canada and the United States and leading to greater choice for consumers; and it had demonstrated the benefits of integration — leading, in the early 1980s, to a search for other sectors where similar arrangements could be made. None fitted the unique nature of the auto industry. However, without a successful Auto Pact, it is unlikely that Canada and the United States would have decided to pursue a much broader free trade agreement.