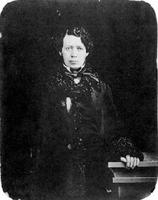 McGee's bitter opposition to the Fenians likely played a role in his assassination (courtesy Library and Archives Canada/C-21543). 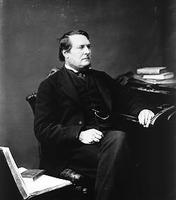 Canada First, nationalist movement founded 1868 by Ontarians George Denison, Henry Morgan, Charles Mair and William Foster and by Robert Grant Haliburton, a Nova Scotian living in Ottawa. Inspired by the recently assassinated Thomas D'Arcy McGee and viewing Confederation as a political transaction among elites, Canada First sought to promote a sense of national purpose and to lay the intellectual foundations for Canadian nationality.

During the 1869-70 Red River Rebellion the group helped provoke the reaction against Métis, Catholics and French which swept Ontario following Thomas Scott's execution. It also campaigned for exclusively British immigration, envisaging a vigorous Anglo-Saxon and Protestant "northern" race that would harness the country's great economic potential. In 1871 the group turned to a less inflammatory expression of its nationalism: Canada's relationship with Britain.

The Canada Firsters were dedicated to Canadian independence from the US and to the British connection, but after Britain concluded the 1871 Treaty of Washington with the Americans, Canada First placed greater emphasis on Canadian autonomy and self-reliance, though the aim was some form of imperial federation, not separation from Britain.

Between 1872 and 1874 the founders, whose circle had expanded to embrace the "Twelve Apostles," drifted apart geographically. Leadership passed to a Toronto group primarily interested in launching a new political party, the Canadian National Association, which was founded in 1874. Its weekly organ, the Nation, had a healthy circulation, and there was speculation that Edward Blake, a prominent Liberal, might lead the party.

But political action was not in keeping with Canada First's original intentions, and the movement had limited appeal outside Ontario; in fact, the call for reform had blatantly anti-Catholic overtones. The new leaders were divided, and Blake finally entered Prime Minister Mackenzie's Liberal government. The political organization quickly collapsed, leaving Canada First with no institutional basis.

Historians have called Canada First the harbinger of 20th-century political developments: third-party challenges, and Canada's complete independence from Britain. But these were not its original goals. Its real heirs were the later imperialists who called for consolidation of the British Empire as they sought an instrument to protect and advance "superior" Anglo-Saxon values and institutions and a vehicle for the definition and assertion of Canadian nationhood. Their implicit rejection of French Canadian nationality produced division and conflict rather than unity of purpose.