Canada and the Dutch Hunger Winter

The Dutch Hunger Winter was a severe food crisis that took place in the Netherlands in 1944–45, during the Second World War. By the time the country was liberated by Canadian and Allied forces in May 1945, around 20,000 Dutch people had died from the famine. With liberation came an influx of food and other provisions for the starving population. The Canadian role in liberating the Netherlands resulted in a lasting relationship between the two countries.

The Dutch Hunger Winter was a severe food crisis that took place in the Netherlands in 1944–45, during the Second World War. By the time the country was liberated by Canadian and Allied forces in May 1945, around 20,000 Dutch people had died from the famine. With liberation came an influx of food and other provisions for the starving population. The Canadian role in liberating the Netherlands resulted in a lasting relationship between the two countries. 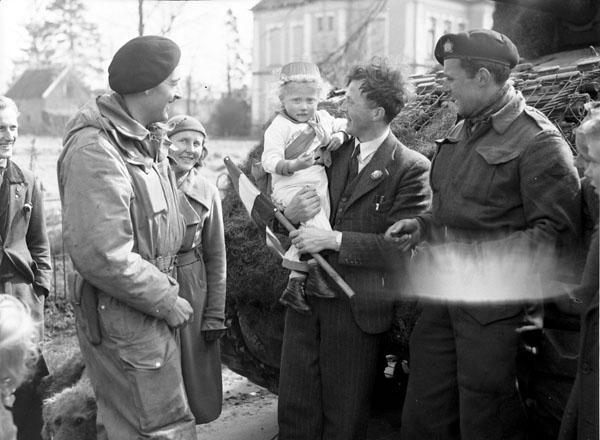 Lieutenant W.J. Trump and Trooper W.H.G. Ritchie of the Fort Garry Horse offering chewing gum to a Dutch child after the liberation of Rijssen, Netherlands, April 9, 1945

In May 1940, German forces defeated the Dutch army and occupied the Netherlands. The Dutch royal family fled to Britain and formed a government-in-exile. (See also Princess Margriet of the Netherlands.) In its absence, the Germans instituted a civilian government that was answerable to the Reich. The German occupiers had support from some Dutch people, particularly members of the Nationaal Socialistische Beweging (NSB), a Dutch fascist party founded in 1931. However, others resisted, sabotaging railway tracks and telephone lines, gathering intelligence and hiding Dutch Jews and downed Allied airmen.

On 6 June 1944, Allied forces landed in Normandy and began their campaign to liberate France, Belgium and the Netherlands from German occupation. (See Canada on D-Day, D-Day and the Battle of Normandy.) In mid-September, the Allies launched Operation Market Garden, a massive campaign to secure bridges across the Mass/Meuse, Waal and Rhine Rivers. If the Allies captured these bridges, they could outflank the German defences of the Siegfried Line and advance toward Berlin.

In September 1944, Dutch railway workers across the country went on strike. The strike had been instigated by the Dutch government-in-exile. The hope was that by stopping the trains from running, they could aid the Allied advance by stopping German reinforcements from reaching the area. However, Operation Market Garden failed. Although southern parts of the Netherlands were liberated, most of the country remained under German control.

In retaliation for the rail strike, the German Reichskommissar for the Netherlands placed an embargo on all inland shipping. This made it almost impossible to transport food from farms in the northeast to the largely urban population in the western part of the country. Although the embargo lasted only six weeks, it severely disrupted the food transportation system. The strike happened at a disastrous time, since crops hadn’t yet been harvested in September. Even after inland shipping was reinstated, producers and distributors held on to food because they feared the Germans would confiscate it. Furthermore, until February 1945, freezing temperatures made it very difficult to transport supplies via the country’s canal system. Together, these factors caused a severe food shortage in the western part of the Netherlands. Around 4.3 million people lived in this region, including 2.6 million in urban areas (e.g., Rotterdam, Amsterdam and The Hague).

According to Dutch historian Ingrid de Zwarte, food became so scarce in the western Netherlands that in February 1945 official rations in the area dropped to 340 kcal per person per day. With so little food available, some people resorted to eating pets, animal feed (e.g., sugar beets) and flower bulbs. Starving citizens made long trips to the agrarian northeast to buy food direct from farmers. The black market thrived. For example, the price of bread on the black market was 210 times the official price. The situation was so bad that 40,000 to 50,000 children were evacuated to the northeast. By the time the Netherlands were finally liberated in May 1945, around 20,000 people had died.

While the Dutch population starved, Allied forces fought to liberate their country. In October and November 1944, the First Canadian Army fought a series of fierce battles to clear the banks of the Scheldt River between the North Sea and the port of Antwerp. In November, the Scheldt estuary was secured, and convoys of Allied cargo ships began arriving at the port. The Allied advance resumed in February 1945, with a huge offensive to drive the enemy across the Rhine River. (See Battle of the Rhineland.)

By April 1945, the Allies had crossed the Rhine River and were pushing into Germany. The First Canadian Army was ordered to clear out the remaining German forces in the Netherlands. By the end of April, the Germans had been pushed back to what was known as the Grebbe Line. On 28 April, they agreed to a truce, including the delivery of food supplies to the starving population behind the Grebbe Line. The following day, Allied bombers dropped 510 tons of food. A few days later, on 2 May, the Canadians started transporting 1,000 tons of food into the area by road. The starving Dutch were relieved. The occupation — and the war in Europe — was at an end. (See VE-Day: Victory in Europe).

Approximately 20,000 Dutch people died during the Hunger Winter of 1944–45, and millions more were affected. The famine had serious long-term consequences as well. Pregnant women, for example, were especially vulnerable. Research studies have shown that children who were in utero during the Hunger Winter tended to have higher levels of LDL cholesterol and triglycerides in later life and higher rates of obesity, diabetes and schizophrenia.

The liberation of the Netherlands brought relief to the starving Dutch population. However, the campaign had been costly for the Allies. More than 7,600 Canadians lost their lives in the nine months it took to liberate the country. This sacrifice led to a lasting relationship between the two countries.