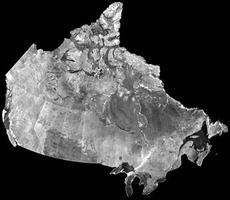 Canada, a name derived from the Huron-Iroquoian kanata, meaning a village or settlement. On 13 August 1535, as Jacques CARTIER was nearing Île d'Anticosti, 2 Indian youths he was bringing back from France informed him that the route to Canada ("chemin de Canada") lay to the south of the island. By Canada they meant the village of Stadacona, on the future site of QUÉBEC CITY. Cartier used the word in that sense, but also referred to "the province of Canada," meaning the area subject to DONNACONA, chief at Stadacona. The name was soon applied to a much larger region. The "Harleian" world map of c 1547, the first to show the discoveries made on Cartier's second voyage, applied it to an area north of the gulf and river St Lawrence, and by 1550 maps were also placing the name south of the river.

Cartier referred to the St Lawrence as the "rivière de Canada" and the name was in general use until the end of the century. But on 10 August 1535 he had given the name St-Laurent to a bay north of Ile d'Anticosti, and the name spread gradually to the gulf and river. In 1603, on his first voyage to Canada, CHAMPLAIN spoke of the river of Canada, but by 1613 referred to St Laurens for the gulf. The name Canada was used loosely, even in official correspondence, as a synonym for NEW FRANCE, which included all French possessions; but it was always understood, as Father Pierre Biard pointed out in the Jesuit Relation for 1616, that "Canada ... is not, properly speaking, all this extent of country which they now call New France; but it is only that part, which extends along the banks of the great River Canada, and the Gulf of St. Lawrence." In 1664 François Du Creux, in his work Historia Canadensis, drew the same distinction.

As French explorers and fur traders pushed ever westward and southward, the area to which the name Canada applied increased rapidly, but its extent seems never to have been defined officially. In March 1762, after the CONQUEST, General Thomas GAGE informed General Jeffery AMHERST that the limits between Canada and Louisiana had never been clearly described. He could only state "what were generally believed ... to have been the Boundaries of Canada & give you my own Opinion." He judged "not only the [Great] Lakes, which are Indisputable, but the whole Course of the Mississippi from its Heads to its Junction with the Illinois" had been considered by the French to be part of Canada. This may be one reason why Britain temporarily abandoned the name and called the colony the Province of Québec.

Canada came into its own in 1791 when the CONSTITUTIONAL ACT (or Canada Act) divided Québec, then considerably enlarged, into the provinces of UPPER CANADA and LOWER CANADA. In 1841 they were joined to form the PROVINCE OF CANADA. In 1867 the BRITISH NORTH AMERICA ACT united the Province of Canada (divided into Ontario and Québec) with NS and NB to form "One Dominion under the name of Canada." The new area was relatively small, but it expanded rapidly. The purchase of RUPERT'S LAND in 1870 extended it to the Rocky Mountains and the Arctic Ocean; the addition of BC in 1871 created a Canada extending from sea to sea; PEI was added in 1873 and Britain handed over title to the arctic islands in 1880. This gave Canada substantially the present boundaries, except for Labrador and Newfoundland, which joined the federation in 1949. In a striking comment, the distinguished American historian Samuel Eliot Morison remarked that "never, since the Roman empire, have two local names received such a vast extension as Canada and St. Lawrence."