Burke and Horwood's first important commission was the rebuilding of the Robert Simpson store in Toronto. Burke had executed the original store in 1894, but it burnt down within weeks of opening. Horwood had gained experience with the most advanced building methods in New York, and Simpson hired the new partnership to design a new fire-proofed store in 1895-96. The store's façade presented the grid-like pattern of the Chicago style, with only limited ornamentation on the ground floor and cornice. The original store and its replacement were likely the first Canadian application of curtain wall construction.

Burke, Horwood and White were one of the most successful Canadian architectural firms during the boom decades preceding World War I. The firm was commissioned to design many churches across the country; other important institutional clients included the YMCA and Mt Allison University in New Brunswick. The firm also produced many substantial homes for wealthy clients in Ontario and the Maritimes.

Burke, Horwood and White were known for their commercial buildings, and this led to the firm's appointment as architects to the Hudson's Bay Company. Large, classical department stores were built in Calgary, Vancouver and Victoria, 1912-26. Burke also consulted on civic planning for Toronto, such as the architectural aspects of the Bloor Street viaduct.

Though the firm designed buildings in various historical styles, its projects also utilized modern materials and methods of construction, such as glazed terra cotta, early iron and reinforced concrete frames, and forms of fire protection. During this period buildings became increasingly large and complex, and their design required more specialized knowledge. Burke always researched advances in technology, building programming, and design, and shared his knowledge with colleagues in the form of lectures and publications. In the words of his biographer, Burke "presided over the transformation of the architect from craftsman to consulting professional."

The firm was renamed Horwood and White in 1919 after Burke's death, and existed under that name until 1969. After the deaths of the latter two partners the firm was run by Horwood's son, Eric C. Horwood (1900-84). In 1979, Eric Horwood donated to the Archives of Ontario over a century's worth of architectural drawings done by Burke, Horwood and White, and by many of their predecessor firms such as Langley and Burke. 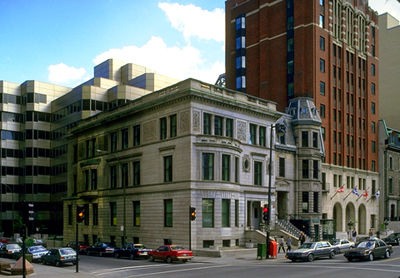