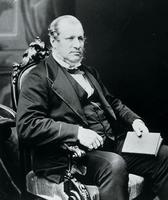 Galt was one of the prime railway promoters of the 19th century and one of the first to call for a federal union of the British colonies (courtesy Library and Archives Canada/PA-13008).

British American Land Company, chartered 20 March 1834 and promoted by John Galt, Canada Company founder; Edward Ellice, Lower Canada's largest absentee landowner; and others. It purchased 343 995 ha of crown land in the Eastern Townships (Qué) for £120 000. Before 1844 its activities satisfied no one: the few settlers who came to the relatively inaccessible holdings complained of high land costs and harsh company policy; local politicians resented the fact that control over the purchase of money went to the executive branch of the government; and British shareholders demanded dividends.

After ceding 206 898 ha to the government in 1841 in lieu of overdue payments, the company appointed Alexander T. Galt, John Galt's son, as local commissioner (1844-55). He increased land prices, but allowed a longer payment time. General immigration and local land sales increased. Urged by Galt and his successor, R.W. Heneker, the company invested in railways and industrial pursuits to stimulate sales. Although it operated until the 1950s, most of its land had been sold by 1910.