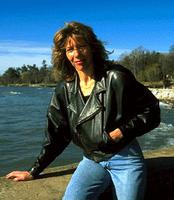 Author of the book Shooting the Hippo (courtesy Maclean's).

Shooting the Hippo: Death By Deficit and Other Canadian Myths By Linda McQuaig (Viking, 309 pages, $29.99)

Imagine a modern-day country in which inflation and the national debt are seen as unimportant and free trade is undesirable. Divorced from the world economy, freed from worries about the value of its currency, the opinions of international money markets or competition from other countries, the government of the day could provide comprehensive social programs and full employment for its citizens. Recessions would not occur, because the government would spend whatever money necessary to pull out of one. Whenever more money was needed, the government would raise taxes again on the rich. Many Canadians need only memory, rather than imagination, to recall the prevalence of those views in Canada as recently as the 1970s. For them, journalist Linda McQuaig's new book, Shooting the Hippo: Death by Deficit and Other Canadian Myths, will evoke either a wistful sigh for ideas gone by, or a groan that they are resurfacing again.

The thrust of McQuaig's argument, which she makes passionately but seldom persuasively, is that the only thing standing between ordinary Canadians and a cradle-to-grave social utopia is a small group of conspirators who seek to transform Canada into a lean, mean, market-driven economy. The principal villain is former Bank of Canada governor John Crow: McQuaig blames his tight-money, anti-inflation policies almost entirely for the recession that beset Canada through most of the early 1990s (while all but ignoring the fact that most Western industrialized countries were hit just as hard). Her other choices and omissions for her Hall of Shame are less predictable, and more baffling: there is surprisingly little specific discussion, for example, of the economic policies of either Brian Mulroney or Jean Chrétien and their governments.

More to the point, McQuaig appears either to ignore the increasingly integrated nature of the global economy or to feel that Canada can function as an economic outlaw, dealing with other countries only on its own terms. In either event, she spends little time explaining how Canada could operate at cross-purposes from other Western economies - even though 27 per cent of Canada's $546.1-billion debt is now held by foreigners, a consequence in large measure of the deficits run up in the free-spending 1970s. Like any debtor, the Canadian government must offer satisfactory terms to the people it owes money to. But McQuaig, while bemoaning the government's efforts to appease foreign lenders, appears to see nothing wrong with the spending habits that led to the present situation.

On the other hand, the author seems obsessed by the influence of more indirect players in policy-making. Large among them is the Toronto-based C. D. Howe Institute, a non-profit research foundation funded largely by Canadian businesses. Its members, like Crow and other apparent enemies of working-class Canadians, share the unfortunate habit, in McQuaig's eyes, of wanting to work in comfortable conditions. At the Bank of Canada headquarters in Ottawa, she notes disapprovingly, "there is a spectacular, vaulted atrium full of plants and trees . . . not even the chilly wind of restraint reaches inside." Similarly, the building housing the Howe Institute is "spacious, bright and full of plants, which, oddly, give it a feeling of life and growth and renewal." More sackcloth and ashes and less greenery, perhaps, might make the opinions within either building more palatable.

But the Howe Institute's real sin seems to be that the papers it produces often reflect the consensus of the business community in favor of lower taxes, deficit reduction and support for Crow's anti-inflation stand. There is also criticism of some of the country's largest news organizations (including Maclean's), because "the media's position on the deficit has been one that overwhelmingly corresponds with that of the elite."

That is probably true, but it is also true that the media's position on the deficit corresponds with the apparent preference of voters and the politicians they elect. At the provincial and federal levels, there is no longer any serious debate over deficit reduction, only on the extent of action to be taken. A tiny rump of nine members is all that remains of the federal New Democratic Party, the champions of Canada's left. And the three NDP governments of Saskatchewan, Ontario and British Columbia have all taken tough cost-cutting actions that bear little in common with past ndp philosophies.

Still, McQuaig makes a compelling case that the much-cited example of New Zealand - which introduced draconian cost-cutting measures after a financial crisis in the mid-1980s - is neither the success story that the media have made it out to be, nor a valid basis of comparison with Canada's present financial situation. (The book's title springs from a tale told by CTV W5 host Eric Malling in his documentary on New Zealand, in which he said that a baby hippopotamus was shot because the zoo could no longer afford to maintain it after funding cuts.) She also makes some interesting historical allusions. In 1776, Scottish economist and philosopher David Hume wrote that Britain's rising debt represented "the direct road to national ruin." His country then entered the period of its greatest wealth and dominance.

But with its curiously smug certainty that the way to move the country forward is to look backward for solutions, Shooting the Hippo represents perhaps the last frontier for a baby boomer generation that has wallowed in every other kind of nostalgia. The 43-year-old author - and anyone else seeking to revive Canada's moribund left - will have to do better than repeat theories that were in vogue when boomers were younger, but which, like mood rings, bell-bottoms and pet rocks, have been discarded and discredited for more than a decade.

Orion, and Other Poems