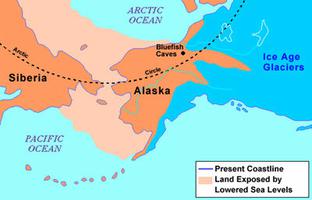 Bluefish Caves contain the oldest undisturbed archaeological evidence in Canada. Located on a limestone ridge overlooking the upper Bluefish River in the Keele Range of the northern YT, the caves consist of 3 small cavities in which loess accumulated during late Pleistocene time. Buried in these aeolian deposits are the bones of mammoths, horses, bison, caribou, sheep, saiga antelope, bear, lion and many other mammals, as well as birds and fish. Many of the bones of the larger animals exhibit butchering marks made by stone tools as well as, on a few mammoth bones, attributes indicative of a percussion/bone flaking technology.

Also present in the loess are the lithic remains of a Burin and Microblade technology akin to that found in the American Palaeoarctic tradition. On the basis of this evidence and a growing series of associated radiocarbon dates, it is now possible to suggest that Bluefish Caves were sporadically and discontinuously used by small hunting groups or parties between 25 000 and 12 000 years ago. Finally, the palaeoenvironmental reconstruction based on pollen, macrofossil, pedological, sedimentological and micro-mammal evidence is in keeping with that obtained from other eastern Beringian regions for the period of the late Wisconsinan maximum and subsequent millennia.