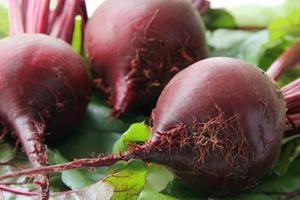 All beets are adapted to temperate climates with optimal growing temperatures of 18-28°C and rainfall of 500-700 mm over a 5- to 7-month growing season. They develop bulbous, sugary roots and many long-stalked leaves during the first year. The roots must be exposed to prolonged periods of frost before the plant flowers in its second year.

Fodder beets have been in existence for thousands of years and are used as cattle feed in northern Europe. Red beets have been eaten from time immemorial, either cooked or pickled, and are grown in all temperate and subtropical countries. The root is spherical (up to 10 cm in diameter) and coloured by betaine, a dark red pigment. Red beets are a popular market garden vegetable throughout Canada.

Sugar beets produce a large, succulent, white, cone-shaped root and a rosette of large leaves in the first year. If they overwinter, they produce large, branched seed stalks up to 2 m high the second year. They are pollinated by wind and will cross readily with other members of the species.

In 1747 Andreas Margraff, a German chemist, proved that the sugar extracted from beets was identical to that from sugar cane. The first sugar-beet processing plant was built in Silesia in 1802. In 1840 sugar beets supplied 5% of the world's sugar. The first refinery to extract sugar from sugar beets in Canada was established at Farnham, Québec, in 1881. Today, approximately 25% of the sugar used worldwide and 10% of Canadian requirements is produced from them.

Sugar beets are adaptable to a wide range of soils and climates. In North America they are grown commercially from Canada (Alberta, Manitoba and Québec) to the Mexican border. Specialized machinery is used to plant the seed, apply pesticides, cultivate and harvest beets. Seedling diseases are controlled by treating seeds with fungicide. Other diseases are not an economic problem in Manitoba and Alberta; however, Cercospora leaf spot can cause severe damage in Québec. In Canada insect pests include cutworm, wireworm, flea beetle and webworm.

Sugar beets are grown under irrigation in Alberta and under natural rainfall conditions in Manitoba. The yield is 25-60 t per hectare, depending on the growing season and rainfall. An average of 125 kg of granulated white sugar is produced from a tonne of beets. The leaves that remain in the field are fed directly to livestock or worked into the soil as green manure.

Swiss chard (B. vulgaris var. cicla) is a foliage beet: it develops no edible root but is grown for its large, fleshy leafstalks and very broad leaves. It is one of the best summer potherbs because it is very heat tolerant. Chard plants grow 50-100 cm high. Common types have crumpled green leaves and greenish white stalks. The newer cultivar (commercial variety), Rhubarb, has crimson stalks. In the cultivar Burgundy, the deep red in the stalk, midrib and main veins makes it a suitable ornamental in mass border plantings.

If harvested frequently, a spring planting is productive until fall frosts; therefore, Swiss chard is a good substitute for spinach. It is a good source of vitamin A. Leafstalks and midribs can be cut and eaten like asparagus; leaves can be frozen or canned like spinach. Commercial production is limited, but Swiss chard is a popular garden crop. 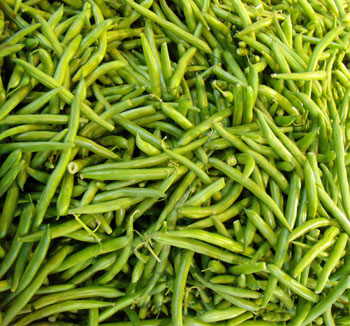