Beavers measure up to 1.3 m from snout to paddled tail and weigh 16–35 kg. The thickset body of the beaver is covered with dark, reddish brown fur consisting of coarse guard hairs over dense, insulating under-fur. The large mass-to-surface ratio and the dense, insulating fur adapt it for a semi-aquatic existence in water that is often ice cold. Oil secreted by two glands near the anus is applied by the beaver to waterproof its fur. After swimming under water for six or seven minutes the beaver is not wet to the skin.

The beaver’s tail — which can be up to 30 cm long, 20 cm wide and 2.5 cm thick — has important uses both in the water and on land. Leathery and sparsely haired, it acts as both a propeller (in water) and prop (on land). Flexible and muscular, the beaver uses its tail as a rudder for swimming. On land, where the beaver is less nimble, the tail props up a sitting or standing beaver.

Large, webbed hind feet are powerful paddles for swimming. The eyes are small and have transparent membranes, which can be drawn across the eyeball, so the beaver can see while under water. In addition, the nostrils and ear openings have valves that can be closed at submersion.

Structural adaptations in the back of the mouth prevent water getting into the lungs and permit the beaver to gnaw on or carry branches while submerged. The beaver is known for its strong, tree-felling teeth. Its incisors never stop growing over the course of its life. The upper and lower incisors are ground against each other, maintaining their sharp edge.

Giant Beaver and Other Species

The giant beaver (Castoroides ohioensis) is an extinct, distant cousin to modern beavers. It lived in North America between 1.4 million and 10,000 years ago. The giant beaver was one of the largest rodents ever to roam the Earth. It grew up to 2 m in length, not including its tail, which measured up to 65 cm. Giant beavers, like many other large herbivores such as mammoths and ground sloths, went extinct toward the end of the Pleistocene epoch, about 10,000 years ago. In addition to Castor canadensis, one other species of beaver exists today, the Eurasian beaver (Castor fiber).

Beavers are monogamous, mating for life. Each beaver colony normally consists of two parental adults, the yearlings born the previous year, and the newborn kits. Just prior to the birth of the young, two-year-olds are forced to leave the parental colony and create their proper lodge and dam. Beavers breed in January–February, have a gestation period of three and a half months and give birth to two to four young. Beavers may live up to 12 years in the wild.

Beavers inhabit forested regions across Canada and north to the treeline, but are infrequent on the prairies. Typically, they occupy slow-flowing streams, where they construct dams of sticks, logs, debris and mud. The beaver is one of the only mammals, other than humans, that can manufacture its own environment. Beavers often build canals for floating logs to build dams. These dams maintain a water supply to protect their lodges, which are built of the same materials as the dams, and have entrances below water level and ramps leading up to living quarters above water.

Lodges are anchored in the mud of ponds and are made of intricately interlaced branches and stems of trees. Mud and grass are plastered around the outer walls. When the sub-zero temperatures of winter come to freeze a prison of ice around the perimeter of the lodge, it is all but impermeable to such predators as lynx, wolf and wolverine. Temperatures outside the lodge may drop to -40°C or more; inside, the warmth of the animals keeps the temperature around 8–12°C.

Did you know?
The average beaver dam in Canada is 10 to 100 m long. However, northern Alberta’s Wood Buffalo National Park is home to the largest beaver dam discovered to date. At 850 m long, it is believed to have been there since the mid-1970s, with several generations of beavers adding to its size. It was discovered via satellite.

Beavers are superb swimmers and can stay under water for up to 15 minutes. When alarmed, they slap the water with their tails, warning others to take refuge under water. Beavers are primarily nocturnal, carrying out most activities from dusk to dawn. They do not hibernate, but regularly leave the lodge throughout the winter to obtain food from a submerged stash. The stash is anchored nearby below the frozen surface. 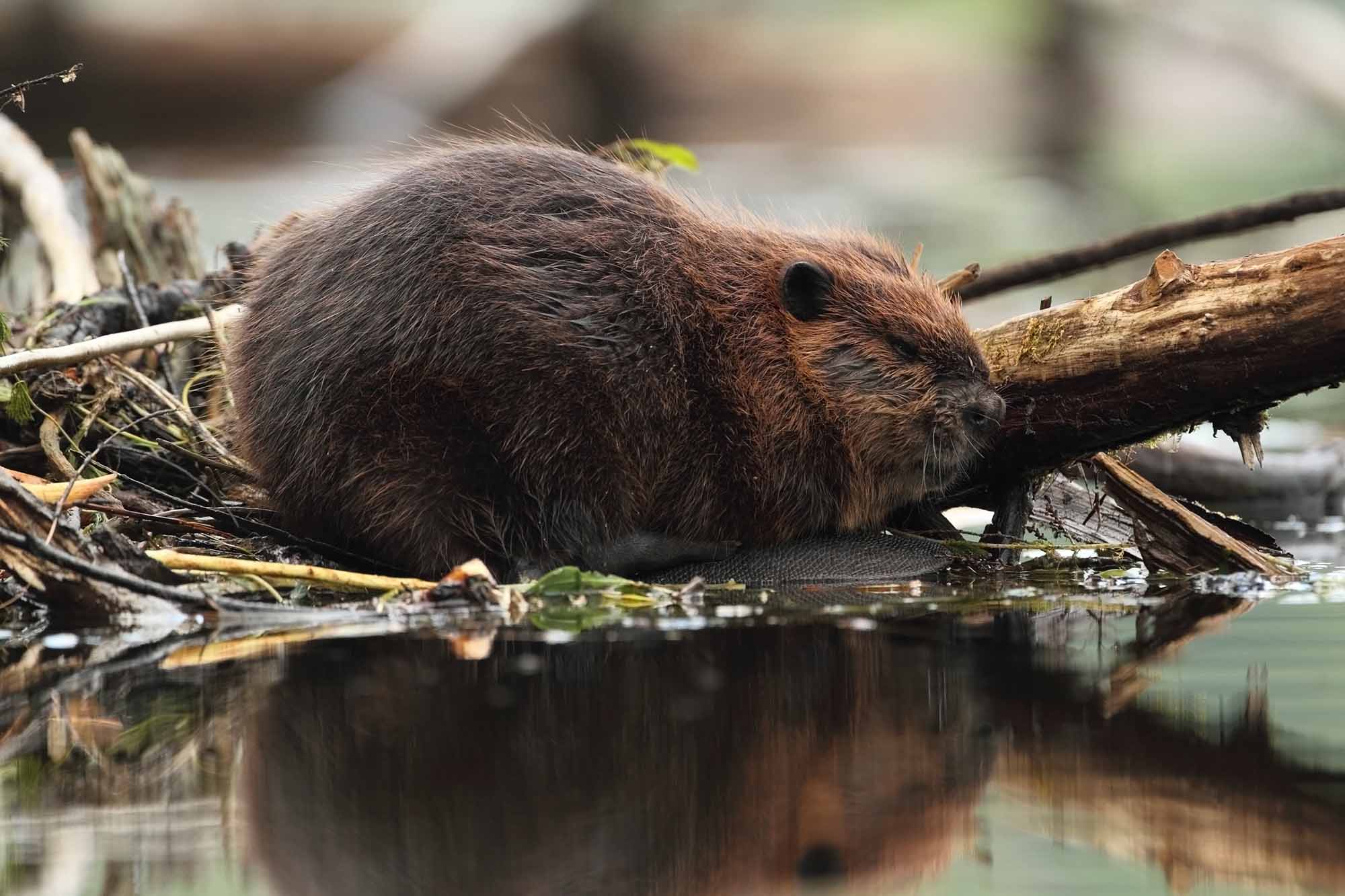 Without beavers’ dams, much of the water in the numerous small streams throughout Canada would flow unchecked through the landscape. By impounding water and felling trees, beavers not only provide themselves with wood for their lodges and twigs for their food, but they also open up dense woods, creating opportunities for a variety of plants and animals. Because of this, they have been called a keystone species in temperate and boreal Forest aquatic ecosystems.

Beavers were an important food source for Indigenous peoples across Canada. The animal’s cultural significance is also evident in its appearance in Indigenous oral history and mythology. European settlers learned about the beaver not long after their arrival, with Jacques Cartier trading for furs in 1534. Two years later, Cartier visited Hochelaga (present-day Montreal), an Iroquoian village whose name is either a variation of the word osheaga, which translates as “big rapids,” or osekare meaning “beaver path.” Because of the beaver’s impact on the development and history of Canada, it is rightly one of Canada’s official national emblems. It is also on the coat of arms for the provinces of Alberta and Saskatchewan and has been immortalized in 1,000 place names across the country. (See also Emblems of Canada and Provincial and Territorial Emblems.)

As an emblem of Canada, the beaver goes back at least as far as the 17th century. The rich-pelted beaver was the staple of the fur trade that prompted Europe's commercial interest in North America. Beaver pelts were considered the most valuable, particularly while felt hats made from under-fur were symbols of prestige in the 17th century. The pursuit of beaver pelts from the Maritimes to the Mackenzie Valley led to the exploration of vast regions of North America. When the fur trade first started, it is estimated that there were 6 million beavers living in what is now Canada. By the time the fashion had changed in the mid-1800s, the beaver was almost extinct. Today, thanks to many protections, thriving populations of beaver exist across Canada once again.

A beaver was depicted on a coat of arms granted in the 1620s to Sir William Alexander by Charles I of England. It also appeared on the coat of arms of the newly incorporated city of Montreal in 1832 and on the first Canadian postage stamp in 1851. The G.E. Kruger Gray-designed five-cent coin, on which a beaver sits atop a log, has been in near-constant circulation since 1937. 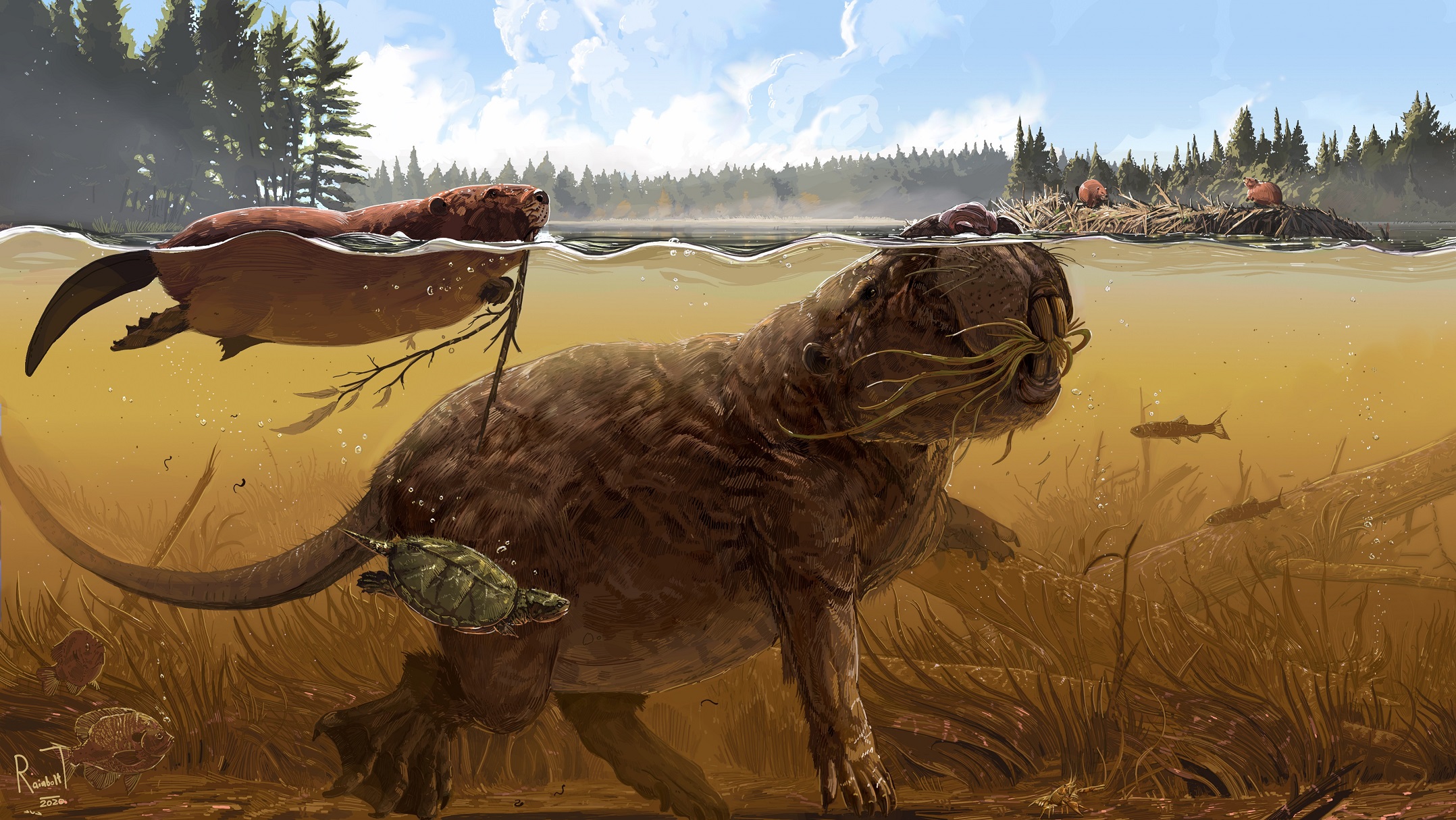