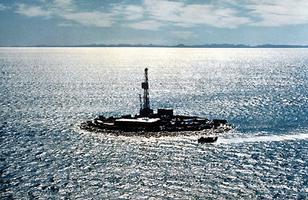 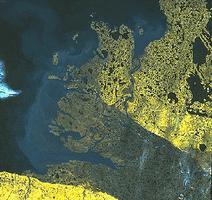 This satellite image shows one of the world's largest river deltas. It has formed over thousands of years as the river deposits silt and sand into the Beaufort Sea. The maze of islands and streams are home to wildlife (courtesy Canada Centre for Remote Sensing).
PreviousNext

The Beaufort Sea can be taken to include the whole of the clockwise gyre of the Canada Basin of the Arctic Ocean north of Alaska, Yukon and the Mackenzie Delta coast, bounded on the east by Banks Island and Prince Patrick Island. Alternatively, it has been defined as that part of the Arctic Ocean lying south and east of a line connecting Point Barrow, Alaska, and Lands End, Prince Patrick Island.

The Beaufort Sea coast is low lying and subject to considerable scouring by ice and erosion by storm surges. The Canadian shelf and the Yukon/Alaskan shelf form the southern boundary of the Beaufort Sea, but they have significantly different widths and alignments. The Canadian shelf is approximately 110 km wide and runs northeast on a bearing of 52º, whereas the Alaskan shelf is about 50 km wide and runs east-southeast at 105º. A major submarine canyon, Mackenzie Trough, cuts the shelf east of Herschel Island. From the edge of the shelf (depth approximately 80 m) the bottom deepens fairly rapidly to 3500 m, with the main Canada Basin to the north being close to 4000 m at its deepest.

The Mackenzie River plays a dominant role in the regional oceanography of the southeastern Beaufort Sea. Annually, about 300 km3 of freshwater and 85 million tonnes of sediment pass through the Mackenzie Delta to the Canadian Beaufort shelf. Northwesterly winds, enhanced by the effect of Earth's rotation, cause the sediment-laden Mackenzie River plume to turn eastward along with the general easterly offshore flow, while easterly winds tend to reverse this flow.

Inshore currents in the ice-free zone in summer are variable and dominated by alternating northwesterly and easterly winds. Farther offshore, in the ice-covered region, the general Beaufort Sea gyre takes over in the form of a westerly flow. The water is typically Arctic Ocean water, low in temperature and salinity, but a Pacific influence is discernible, originating in the Bering Sea and reflected in the fauna, which includes Pacific herring and straying salmon. Tides are mainly semidiurnal, with a small range from 0.3 to 0.5 m.

The region is rich in seabirds and marine mammals in summer and is an important breeding ground and migration staging area. The general level of biological production is fairly high, subarctic rather than arctic, and seals and whales form an important element in the indigenous economy.

Exploration for oil and natural gas on the Canadian shelf began with seismic tests in the late 1960s, and the first well was drilled in 1973. There was a brief period of production in 1986 when Gulf Canada Ltd (now Gulf Canada Resources Limited) produced 50 400 m3 of oil from the Amauligak field and marketed it to Japan. Exploration continues with recent leases of sites in deeper water at the shelf break and over the continental slope. These sites will require floating drill rigs and, therefore, dependable protection from the forces of the Arctic pack ice in order to prevent oil spills.