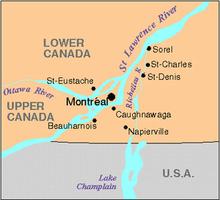 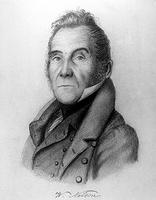 Wolfred Nelson, one of the leaders of the Patriote movement, by Jean-Joseph Girouard (courtesy Library and Archives Canada/C-18408).
PreviousNext

In mid-Nov 1837 the government of Lower Canada decided to send out the army against the PATRIOTES and issued orders for the arrest of their leaders. In Richelieu County the patriotes, led by Thomas Storrow Brown of Montréal, seized the manor of Seigneur Pierre Debartzch and surrounded it with fortifications, while in St-Denis they organized around Dr Wolfred Nelson.

Two army detachments came from Montréal to attack St-Charles, the one led by Col Wetherall taking the south route via Chambly and the other led by Col Charles Gore taking the northern route through Sorel. Gore's troops, having marched through the night in dreadful weather conditions, arrived at St-Denis on the morning of Nov 23 and attacked the rebels, who had dug themselves in at the far end of the village where the St-Germain house and Dr Nelson's distillery were to be found.

The walls of the St-Germain house withstood the artillery attack and its occupants were well placed to fire from its windows on the exposed troops. Gore had to sound the retreat at about 3:00 in the afternoon when reinforcements for the besieged patriotes were beginning to flock to neighbouring villages and threatened to cut him off from Sorel.