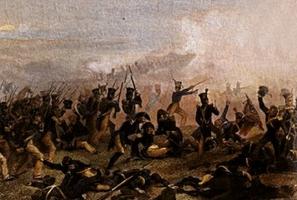 Lundy's Lane was the site of a battle fought between American troops and British regulars assisted by Canadian Fencibles and militia on the sultry evening of 25 July 1814. It was one of the most important battles of the war, halting the American advance into Upper Canada (courtesy New York State Military Museum). 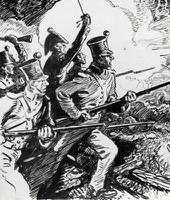 An injury at the Battle of Lundy's Lane ended Major General Phineas Riall's miltiary career. His arm was amputated shortly after (detail from artwork by C.W. Jeffreys, courtesy Government of Ontario Art Collection, 621234). 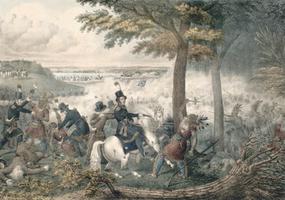 The Battle of Lundy's Lane, during the War of 1812, was fought between American troops and British regulars assisted by Canadian fencibles and militia on the sultry evening of 25 July 1814, almost within sight of Niagara Falls.

On 3 July 1814 Major General Jacob Brown invaded Upper Canada across the Niagara River and quickly seized Fort Erie. Numbering more than 3,500, his army of regulars, militia and Aboriginal allies advanced north along the river against strong rearguard fighting by the British. They camped at Chippawa and on the afternoon of 25 July Brigadier General Winfield Scott led his brigade, about 1,000 strong, along the Portage Road towards the intersection of Lundy's Lane within two kilometres of the falls at Niagara.

The British, not knowing Brown's intentions or exact position, also advanced up the Portage Road where they set up guns on the high ground of Lundy's Lane. They were flanked by regulars, Canadian militia and Aboriginal allies under John Norton. Upon seeing the British forces, Scott halted within range of the British guns, which began to inflict casualties among the Americans. Thus, shortly after 7 p.m., began the bloodiest battle of the War of 1812.

One of Scott's regiments attacked the British left flank, pushed it back and captured the wounded Major General Phineas Riall, second in command under Lieutenant General Gordon Drummond. Brown arrived with the rest of his army and launched repeated attacks against the British gunners. Darkness fell on bitter hand-to-hand fighting. Around the position of the guns, regulars of both sides fought with bayonets and fired their muskets at such close range that the muzzle blasts crossed each other. In the flash of the exploding powder they could even see their opponents' distorted faces. The noise, thick black powder smoke, and screams as men were shot or stabbed, must have seemed like a vision of hell.

The commanding generals on both sides were wounded, Brown and Scott so severely that they had to withdraw. The Americans captured the British guns but failed to take them away when, about midnight, their exhausted troops withdrew southward to Chippawa.

Aftermath of the Battle

The British troops, Canadian militia and Aboriginal warriors slept on or near the battlefield until morning. During the night, they could hear the groans of the wounded and their pleas for water. In daylight, they could see the battlefield littered with the dead and dying, men of both armies intermingled. Almost 900 were killed, wounded and missing on each side. Lundy's Lane was one of the most important battles of the war, for it stopped the American advance into Upper Canada. The Americans withdrew to Fort Erie; General Drummond followed and began a siege of the fort, the end of the final invasion of the province.