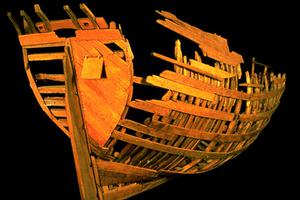 Basques were expert fishermen and sailors from the southeast corner of the Bay of Biscay. With the Portuguese, they were early arrivals to Newfoundland's Grand Banks. Around 1525 they began whaling and fishing for cod off Newfoundland, along the north shore of the St Lawrence River from the Strait of Belle Isle to the Saguenay River, and in places where similar conditions attracted such northern marine life. The Basques controlled the fishery along la haute main (northeast coast) for over a century.

Every spring until about 1626 they sailed to their North American whaling stations, where they set up scaffolding to dry codfish and built stone ovens to prepare whale oil, a commodity that was highly prized in Europe. Their encounters with natives, particularly Micmac, were friendly. In December or January, when ice conditions began to worsen, the Basques returned home.

Basque activities in the St Lawrence estuary reached a peak in the period 1550-80. In the early 17th century a combination of factors eventually ended their voyages. These included a decrease in the whale population, a weakening of Spain's influence during its war with France, English-Dutch competition in northern waters, increased Inuit hostility and the growing strength of New France.

Samuel de Champlain encountered Basque fishermen during his early voyages and he benefited from their knowledge of the north shore of the St Lawrence. He had close ties with those who came from France, in spite of their protests over the founding of Québec. With Marc Lescarbot, Champlain described the major Basque settlement at Lesquemin (Les Escoumins, Qué); at Tor Bay (NS) he met an experienced Basque fisherman who had come there every year since 1565. He described the Strait of Belle Isle as an area frequented by Spanish Basques.

The Basques left many traces of their presence on our shores, including place-names such as Mingan (Québec) and Ingornachoix, Port au Choix and Port au Port (Newfoundland). French Canadians adopted the Basque word orignal for the Canadian moose. Archaeological work at Red Bay, Nfld, has uncovered important evidence of Basque habitation, including an abundance of red roof tiles (used for ballast), pottery, glassware and skeletons. Five Basque shipwrecks have been located in the area; the earliest, the San Juan, dates from 1565.