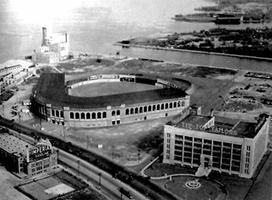 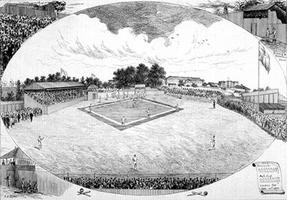 Baseball is a game played with a bat and ball between 2 teams (of 9 players each), which alternate between being at bat and in the field. The object is to score runs by advancing players counter-clockwise around 4 bases, each 90 feet (27.5 m) apart. Games of bat and ball have their roots in ancient religious rites celebrating spring's return and appear throughout history. The game in North America is a descendant of English rounders. In New England, rounders evolved into a popular regional sport, known as townball, played at public meetings in the early 19th century.

From these informal games emerged 2 interpretations of baseball, each with its own written rules and organized teams. These 2 styles competed for popularity until the American Civil War. The "Massachusetts game" was closest in form to townball and allowed 10 to 14 men on the field. A variation of this game was played in Beachville, Upper Canada (Ont), on 4 June 1838 at a celebration to mark the previous year's victory by government forces over insurgents. This was the first recorded baseball-type game in Canada and predated by 7 years the establishment by Alexander Cartwright and his team, the New York Knickerbockers, of the "New York game" with 9 men on the field.

The early history of organized baseball in Canada is closely associated with what is now southwestern Ontario. The first Canadian team was the Young Canadians of Hamilton, formed in April 1854. A local clerk, William Shuttleworth, was instrumental in its development. Other early teams included the Burlingtons of Hamilton (1855), a London team (1856) and a St Thomas team (1858). The Massachusetts game rules were favoured. The New York rules were introduced in 1859 in Hamilton. The popularity of the 9-man game in the US and the beginning of international play in 1860, with Buffalo's victory over the Burlingtons, led to its rapid adoption in Ontario.

The Young Canadians of Woodstock awarded themselves a silver ball in 1863 and it became an annual prize for the Canadian champion. Woodstock's lineup included 7 Ontario-born players whose occupations varied. In 1864 they were defeated by the American champions, the Brooklyn Atlantics, at a Rochester, NY, tournament. In 1867 Woodstock, Hamilton and Ingersoll entered the world baseball tournament in Detroit, Michigan, and Ingersoll won the junior class team championship.

By 1868 large financial rewards induced some teams to move toward a semiprofessional status, with team members sharing tournament prizes. In 1869 the Guelph Maple Leafs replaced Woodstock as Canadian champions. The Guelph team was the first to import American professionals, who together with such Canadians as star pitcher William Smith won the Guelph world semiprofessional baseball championship in 1874 in Watertown, NY.

In 1877 a number of smaller American industrial centres organized the reform-minded International Association. London and Guelph joined and the Tecumsehs won the first championship with a season-ending victory over the Pittsburgh Alleghenys. London then rejected membership in the National League, owing to the league's restrictions on games with nonleague teams, and was the lone Canadian entry in 1878.

Financial difficulties led to the Tecumsehs' mid-season collapse. Organized baseball in Ontario lacked clear direction again until the 1885 formation of another Canadian League based in the province. Toronto's decision to join an American minor league in 1886 led to the end of professional baseball's independent character in Ontario, since the Ontario teams became subservient to the interests of American major league organizations.

Baseball gained in popularity in other parts of Canada. In 1865 a bylaw was passed in Montréal preventing the playing of baseball in city parks or public places. In a more positive vein, the game spread to the Maritimes from New England and the first Canadian-born major league player, William Phillips of Saint John, NB, played for Cleveland in 1879.

In western Canada a crude form of baseball had been played at Red River in the 1840s, but the modern game did not appear until 1874 in Winnipeg. Its growth followed the railway and many of the early promoters were associated with companies anxious to move players and fans along the rails. Rail workers and a future Saskatchewan premier, Walter SCOTT, were among those who enjoyed the amateur game in the 19th century.

American professionals contributed to the game's spread, as did eastern Canadians such as James Ross, a member of London's champion amateur team of 1877. He took the game west, becoming a rancher and later a member of the Canadian Senate. By 1904 baseball was so popular in the Yukon that a 2-game international championship was played and won by Whitehorse over the Alaskan town of Skagway. In 1907 the Western Canada League, a minor professional organization, was formed in Alberta and 2 years later included teams from Saskatchewan and Manitoba. The league led a financially troubled and brief existence, duplicating the history of other minor professional sports organizations in Canada.

The Cape Breton Colliery League, based in coal-mining towns in Nova Scotia, survived as an official minor league from 1937 to 1939. The Provincial League in Québec, at times an outlaw league outside the control of major league baseball, lasted from 1935 to the early 1960s. Several French-Canadian stars such as Roland Gladu and Jean-Pierre Roy were developed in this league.

Toronto and Montréal had teams in the International League, a respected minor league, for periods of 78 and 55 years, respectively. Montréal developed a reputation as a good baseball town and the team's ownership included, at one time or another, Canadian baseball star "Tip" O'NEILL and Charles Trudeau, father of the future Canadian prime minister.

In 1946 Jackie Robinson became the first black player in modern "organized" baseball when he played for the Montreal Royals. He was a crowd favourite, leading the Royals to the minor league baseball championship. A new era began in 1969 with the introduction of major league baseball to Montréal.

In 1977 the MONTREAL EXPOS moved from the comfortable surroundings of Jarry Park to Olympic Stadium, where they have drawn crowds of over 2 million in one season. A second Canadian major league franchise began in 1977 when the TORONTO BLUE JAYS joined the American League. They attracted over 6 million fans in their first 4 seasons, a major league record. In 1987 they set several league attendance records: 2 778 459 fans at home games, 1 959 280 fans at road games, and the overall home/away game attendance record.

In 1989 the Blue Jays moved from Exhibition Stadium to the SkyDome in downtown Toronto. The 1990 season, their first full year in the SkyDome, saw the team draw over 4 million fans for their home games, an all-time major league attendance record. The Blue Jays have been division champions 5 times, and in 1992 and 1993 reached the pinnacle of success, becoming the first Canadian-based team to win the World Series and the first team since the 1976-77 Yankees to repeat as World Series champions.

The amateur game in Canada is overseen by a hierarchy of local and provincial organizations, such as the Ontario Baseball Assn founded in Hamilton in 1918. At the national level, the Canadian Federation of Amateur Baseball coordinates in such areas as coaching and umpiring programs, Canadian national championships and national amateur teams.

There were over 250 000 registered amateur players in Canada in 1991 (up from 115 000 in 1981) in the senior, junior, bison, midget and under-midget categories. The National Baseball Program, which develops our best players for international and Olympic play, has reflected this growth and has produced several players of major-league calibre, including Larry Walker (the National League MVP in 1997) and Kevin Reimer.

The 1990s were a golden age for baseball in Canada. The Toronto Blue Jays won 2 World Series in 1992 and 1993, the Montreal Expos were arguably baseball's best team at the time of a season-ending strike in 1994, and more Canadians played in the majors in 1993 (16) than at any time since 1884 (28). In 1991 Ferguson JENKINS became the first Canadian to be voted into baseball's Hall of Fame in Cooperstown, New York, and in 1997 Larry Walker of the National League Colorado Rockies became the first Canadian to win a most valuable player award.

Baseball remains identified as the national game of the US, but its popularity has spanned many generations in Canada and the 2 very different societies of the 19th and 20th centuries. The Canadian Baseball Hall of Fame opened at Exhibition Place, Toronto, in 1983. Some of its inductees include Phil MARCHILDON, George "Mooney" GIBSON, Ferguson Jenkins, John Hiller, Reggie Cleveland, Claude RAYMOND, Bob EMSLIE, and Charles BRONFMAN.

Softball is a variation of baseball in which a larger ball is delivered in an underhand motion to the batter. Two types of softball are played in Canada: fast pitch, in which the ball is delivered to the batter in a rapid motion; and slow pitch, in which the ball is tossed in an arc. The game began as a form of indoor baseball in the 1890s in the US, but soon came to Canada where it has become a popular summer recreation for men and women. The Ontario Amateur Softball Association, formed in 1923, was the first such organization anywhere. Softball has since spread throughout the world. Canadians are credited with introducing it into Holland during WWII.

In 1949 Tip Top Tailors of Toronto won the North American championship in Little Rock, Arkansas. In 1972, represented by the Richmond Hill Dynes of Ontario, Canada won the men's world championship in Manila, and in 1976 another Canadian team, Victoria Bate Construction of BC, tied for the men's world title with the US and New Zealand at the tournament in New Zealand. A Canadian team won the gold medal at the 1987 Pan-American Games and qualified to attend the 1988 Olympics.

Softball is overseen by local and provincial organizations, and the Canadian Amateur Softball Association acts as a nationwide co-ordinating body responsible for 7 annual national championships. Over 567 000 men and women play organized softball on close to 40 000 teams across Canada.