The Bar U was colloquially named after its famous brand — a U shape with a line over top — that was used to mark cattle as belonging to the ranch. The ranch’s official name, however, was the North West Cattle Company. It was one of the largest and longest-lasting of the ranches that, during the last decades of the 19th century, dominated the foothills and plains of what would become Alberta and Saskatchewan (see also Ranching History). The company was founded in 1882 in response to the Canadian government’s initiative to make Western grasslands available to cattle owners at reasonable rents. By this means, Prime Minister Sir John A. Macdonald hoped to encourage development in the Canadian West, asserting Canadian sovereignty over what was then an isolated region.

Did you know?
The legendary cowboy John Ware worked at Bar U Ranch. Sources indicate that Ware was born enslaved in the United States (see also Black Enslavement in Canada). It is likely that Ware gained his freedom at the close of the American Civil War (1865). After an 1882 cattle run, he remained in the foothills area of what is now southern Alberta. Ware became a folk hero for his  strength, skilled farming techniques and skilled horsemanship.

Within the next decade, the Bar U leases included over 600 km2 of grassland, and their initial herd of 3,000 cattle had grown, by additional purchases and natural increase, to more than 10,000. The ranch supplied both the North West Mounted Police and Treaty 7 Indian reserves with meat that had formerly been supplied from the United States by trading companies based in Fort Benton, Montana. In addition, from 1887 onward, Bar U cattle were shipped eastward on the Canadian Pacific Railway to Montréal and then to Great Britain. This trade was facilitated by the fact that Sir Hugh Allan, the major financial backer of the Bar U, owned a shipping company. The export of live cattle to London, Liverpool and Glasgow became a major contributor to Canada’s trade; in fact, it was more important than wheat until the turn of the 20th century.

Bar U became increasingly famous under the ownership of entrepreneur George Lane, who owned the ranch from 1902 to 1925. In 1905, Lane obtained a lease from the government for 44,000 acres, which ensured the territorial integrity of the ranch for the next 45 years. At the Bar U, Lane ran a herd of between 3,000 and 4,000 breeding cows. When calves were ready to be fattened, they were sent to other ranches owned by Lane, as much of the land along the Bow and Red Deer rivers belonged to him. He also introduced irrigation and began growing alfalfa for feed, making operations at Bar U more efficient. Lane benefited from his close connections with the Winnipeg cattle shipping company Gordon, Ironside and Fares, which helped to maintain a profitable flow of cattle, first to the British market, and later to Chicago. 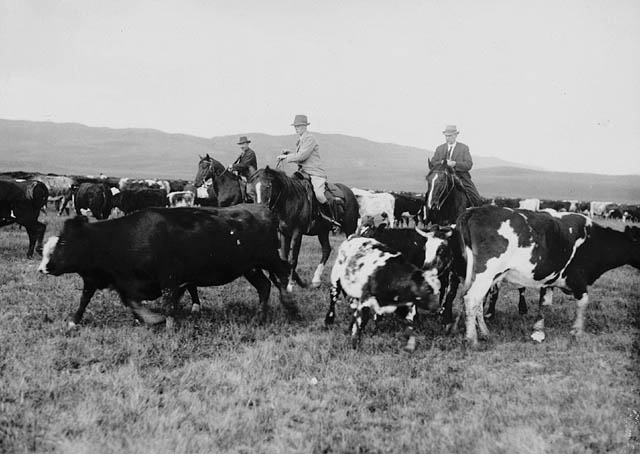 The Prince of Wales helps roundup cattle at the Bar U Ranch during his royal tour from 15 to 16 September 1919.

During the decade before the First World War, Lane diversified his operations at the Bar U by building up an internationally famous breeding herd of Percheron draft horses (horses bred for farm labour such as plowing). He planned to supply incoming homestead farm families with horses, in order to benefit from the tide of farm settlement bringing an end to the open range era. Lane’s personal stature as a lobbyist for the cattle industry, as a respected cattleman and horse breeder, and as one of the founders of the Calgary Stampede, further enhanced the reputation of the Bar U. As testament to the ranch’s prominence, in 1919, the Prince of Wales paid the ranch a visit during his royal tour in 1919. 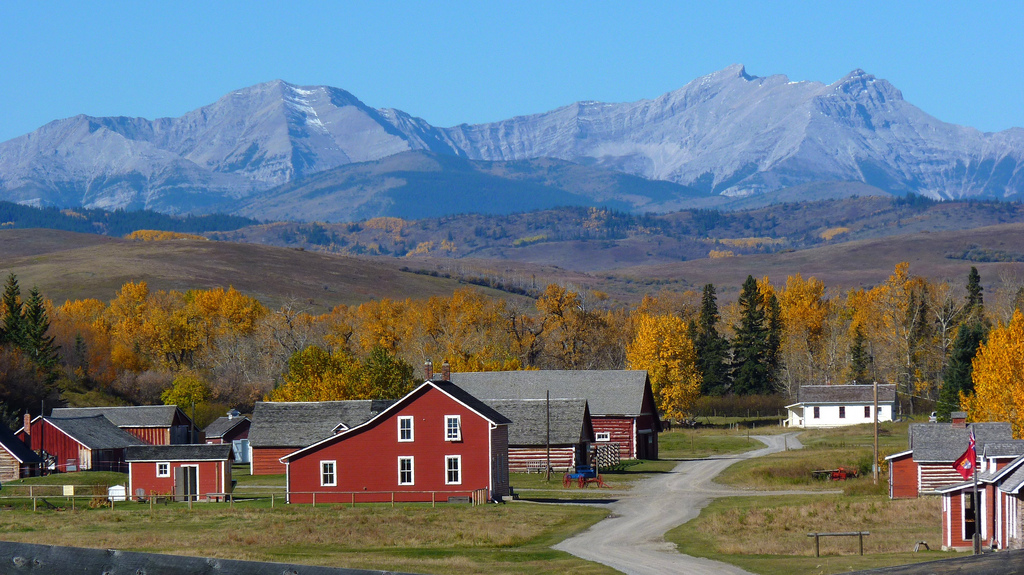 Pat Burns, an influential businessman in the new province of Alberta, bought the Bar U Ranch in 1927. He was 71 years old and already owned a string of ranches ranging along the foothills and Porcupine Hills from Crowsnest Pass to Calgary. The purchase involved 37,000 acres of deeded land, 58,000 acres of leased land, and 6,500 head of livestock. Bar U subsequently became part of Burns’s wide business network which included dairy products, produce and beef cattle. His empire involved cow-calf operations (such as the Bar U), ranches for fattening cattle, a Calgary feedlot and a meat-packing plant.

Burns adopted conservative, low-cost methods on his ranches. At the Bar U, the Percheron horse herd was phased out and crops were reduced to a minimum. Instead, cattle grazed on the natural, winter range cleared of snow by the Chinook winds. By reducing production costs, Burns nursed his ranches through the Great Depression of the 1930s. When Burns — affectionately known as “The Old Man” among his staff — died in 1937, the formidable management team, which he had put in place, took over with scarcely any disruption. John Burns, Pat’s nephew, chaired the board of P. Burns Ranches Limited — the organization that ran the ranch until 1950. Under the careful stewardship of foreman Raymond Clifford, George Lane’s herd of Shorthorn cattle was replaced with Herefords and the quality of the stock was improved. As a more optimistic economic climate developed, operations were modernized. The company was in an excellent position to benefit from a period of rising prices and from the insatiable demands of a wartime economy from 1939 to 1945. The last decade of the Bar U Ranch as a corporate entity was one of its most prosperous.

In 1950, Burns Ranches sold the Bar U headquarters and much of the rangeland to rancher and auctioneer J. Allen Baker. Other parcels of land were bought by neighbours. Baker, and later rancher Melvin Nelson, who bought the ranch in 1984, were both conscious of the Bar U’s illustrious history and maintained its reputation until it was sold to Parks Canada.

In the 1970s, Parks Canada began searching for an appropriate site to commemorate and celebrate Canada’s ranching history. In 1991, they settled on Bar U. The site was chosen not only because the Bar U was the most famous ranch in Canada but also because it was home to 35 historic buildings. These include eight log buildings dating to the 1890s, as well as a feed mill and horse barn built in the 1920s. A visitor centre was built on the top of the coulee overlooking the ranch, and the site was officially opened in July 1995. The ranch is easily accessible from Highway 22 South — also known as the Cowboy Trail — and visitors and school groups can enjoy interpretive tours. Special events, like ranch rodeos, quarter horse demonstrations and polo matches, are held on weekends throughout the summer. In order to give visitors a feel for what Bar U would have been like, the ranch houses a small herd of beef cattle, several working Percheron horses, and omnipresent cowboys on horseback.

Bar U in Popular Culture 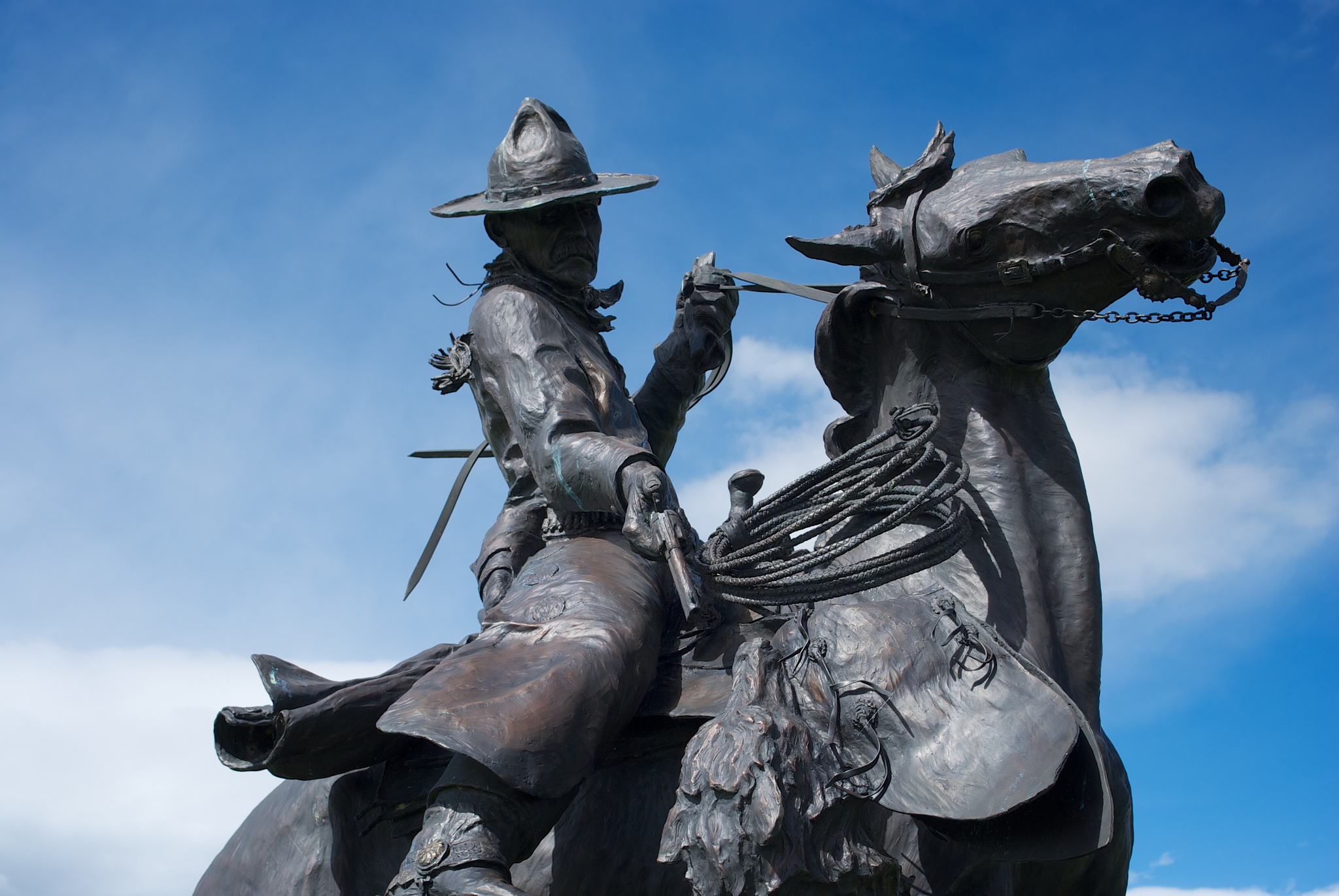 Statue outside Bar U Ranch, inspired by Charlie Russell's painting, "George Lane Attacked by Wolves." Photo taken on 25 May 2013.

The majority of Canadians view the history of the “Golden Age” of open range ranching in the West through the lens of myth and legend. The Bar U had extraordinarily close ties to this “mythic west” created by journalists, novelists, impresarios, filmmakers and artists. Bar U foreman Ebb Johnson was the model for the main character in Owen Wister’s 1902 novel TheVirginian, one of the first westerns ever written. Harry Longabaugh, better known as the Sundance Kid, broke horses at the ranch, and later became a leader of the Wild Bunch, a group of American outlaws. Finally, George Lane and his wife were friends with Charlie Russell, the preeminent “cowboy artist” from Montana. Lane hosted Russell during the 1912 Calgary Stampede, and Russell responded by painting George Lane Attacked by Wolves, which would become the inspiration for the statue at the entrance to the visitor centre at the historic site. Later, Lane bought another of Russell’s paintings to present to the Prince of Wales during the royal visit the to the Bar U in 1919.