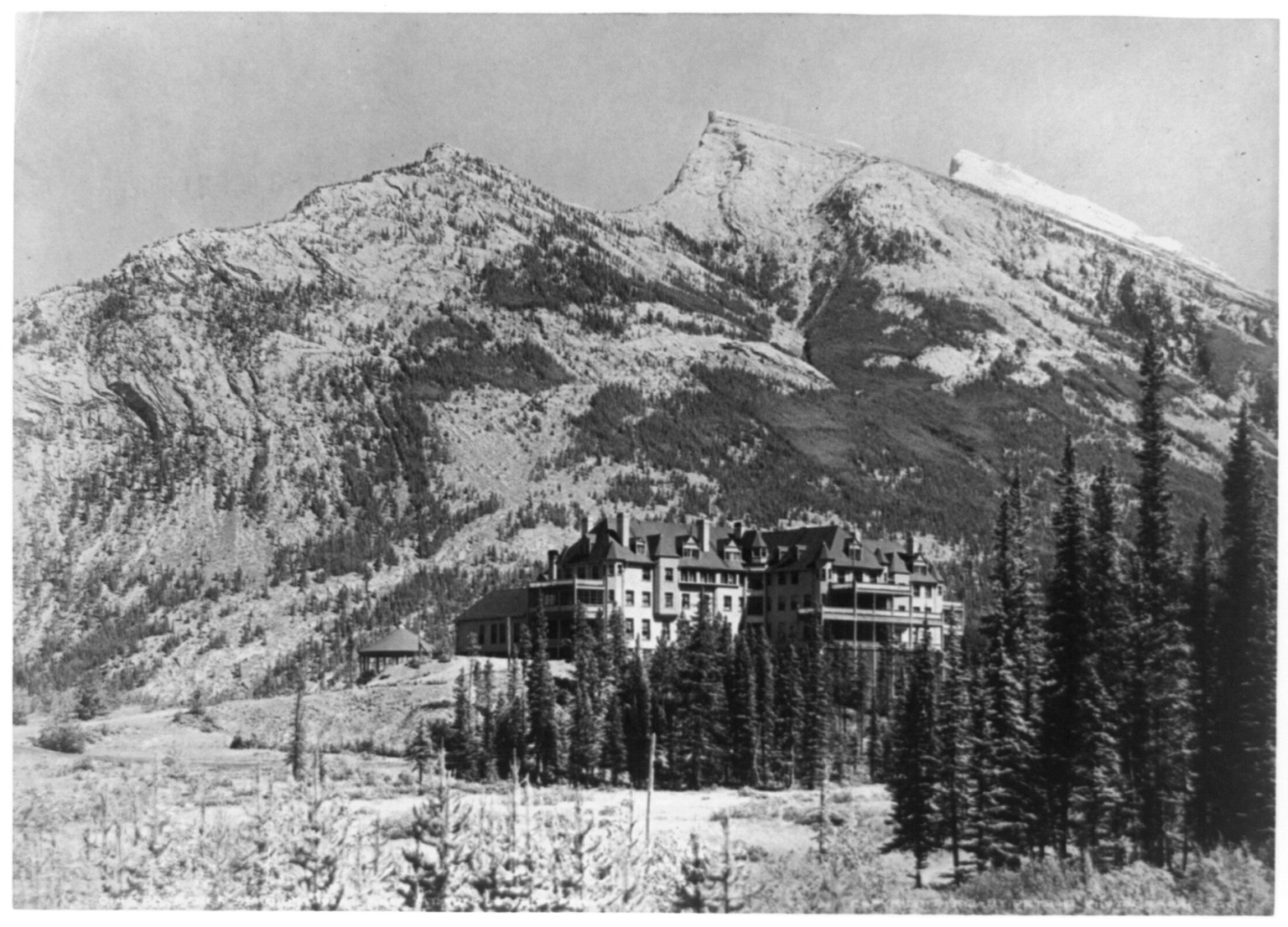 Banff Springs Hotel is a luxury hotel located in Banff National Park (a UNESCO World Heritage Site (1984)) in Alberta. This famous Canadian building is an excellent example of a resort hotel, declared a National Historic Site in 1988, and part of a larger network of National Parks in Canada. It is known for its architectural design within a natural setting (the Rocky Mountains) as well as its ability to support a thriving sports and leisure culture. The hotel was developed as part of the CPR’s (Canadian Pacific Railway) network of hotels, which built landmark hotels in young cities across Canada in order to encourage the use of its transcontinental lines. The Banff Springs Hotel is in the lineage of hotels such as the Chateau Lake Louise in Alberta, Le Chateau Frontenac in Québec City and the Empress Hotel in Victoria, British Columbia. Known as the “Castle in the Rockies,” the Banff Springs Hotel is predominantly in the Scottish Baronial style, featuring an Arts-and-Crafts interior.

The setting of the hotel is a confluence of rivers, forests, mountains and a natural mineral hot spring. The hotel is surrounded by Castle Mountain, Fairholme Range, Tunnel Mountain and Mount Rundle, providing it l with magnificent views. The nearby Banff Upper Hot Springs, which were promoted as therapeutic waters, were a strong motive for locating the hotel at the highest point above the crossing of the Bow and Spray Rivers. Historically, the Banff Springs Hotel was closely tied to the passing of the Canadian Railway Bill of 1881 under Prime Minister Sir John A. Macdonald. It was during this time that the Canadian Pacific Railway Company completed its transcontinental route in British Columbia (1885). Thereafter, the CPR embarked on the development of accommodations for those that traveled on their lines. Banff Springs Hotel was at the very beginning of this endeavor.

The tourist profile of the 1880’s included the affluent who went on travel tours to spa resorts. A prominent business-man and CPR’s president, Cornelius Van Horne, wanted to provide a luxurious hotel experience for these guests exploring the west. Van Horne was an advocate for the protection of the Banff Hot Springs, seeing it as an opportunity for the development ofan exquisite natural resource to supplement the hotel. His vision realized its full potential by 1905, with visitors visiting to the hotel from around the world.

The first iteration of the hotel was completed in 1888 by American architect Bruce Price for this wealthy international clientele. Price built a five-story, wood-frame structure at an unprecedented scale, which connected the thermal mineral spring water through a pipe system into its many pools. The idea that architecture should be an organic element of its surroundings, typical of architectural thought of the time, was incorporated by Price’s design, with a focus on creating luxury. The design indulged in the French chateau style as well as the late Victorian, typical of Canadian architecture at the moment. The hotel could accommodate around 280 guests and featured steep hip roofs, dormers, turrets, bay windows and a cedar shingle roof. The high peaks fit perfectly into the sea of pine and spruce trees.

The early days featured Swiss mountaineer guides (1899) provided as a service to the guests. These guided adventures in the mountains or through the rivers were evidence of the evolving culture of the time. Increasing demand for accommodation led to the period between 1900 and 1910, which included both modifications and additions, with half a million dollars put into a five-story extension on the south by Montréal architects Hutchinson, Wood and Miller. In 1910 maximum capacity was quickly reached once more and additions were beginning to form an aesthetic that did not serve the majestic vision set forth by the leadership. With that in mind, the CPR involved another American Architect, W.S. Painter, to provide a more cohesive concept. He built an 11-story central tower, which was completed in 1914 and cost two million dollars. The hotel accommodated up to 300 guests. It was built using a progressive style of steel and concrete construction. . Painter followed Price’s concept of the French chateau style, but included predominantly Scottish baronial influences. Price’s cedar-shingles and turrets were replaced with flat dormers and circular arched windows with a limestone facade, changing its aesthetic substantially. Bay windows and balconies allowed the architecture to provide extended views of the mountains and landscape. The new hotel tower featured a bathing area with a variety of offerings including cold fresh water, hot mineral water, Turkish and Russian baths, and private sulphur baths. To further develop the image of the hotel, Kate Reed, wife of the CPR Director of Hotels, served as the interior decorator.

The hotel experienced great periods of growth in the 1920s and 1930s. Among the events the hotel administered to captivate their guests’, included a summer festival featuring the dance and song of local Stoney-Nakoda Indigenous people as well as a music festival that gave visitors a strong sense of the culture of the area. Amenities have varied over time and have been dependent upon cultural changes in the area. These activities have included horseback-riding, canoeing, water rafting, tennis and golfing an 18-hole golf course was built in 1927).

A devastating fire in 1926 burned the north wing of the hotel to the ground. From 1927 to1928, a $9 million dollar budget was reserved to complete Painter’s plans. J.W. Orrock updated the plans, enlarged them and adjusted the roofline.Construction commenced for a new north wing and south wing made out of steel and concrete, placed at angles to the central tower, and faced with Rundle stone. The hotel rooms were done in a variety of styles, along with the opulent interiors of the halls of the hotel, which displayed oak paneling on its walls, stained glass, a marble fountain, extensive use of Tyndall stone, Tiffany sconces, coffered ceilings, and lime flagstone on the floor. The years between 1942 and 1945, closed the hotels doors due to the Second World War. The post-war clientele changed to include the middle class who now had access to travel opportunities only available to the elite in the past. Furthermore, in the development of the hotel’s history, it was not until 1969 that the hotel opened its doors to four-season tourism.

In 1987, with the coming of the 1988 Winter Olympic Games, $100 million was invested in restoration and renovation. The hotel prides itself on being a destination of distinction and thus they are meticulous about maintenance, presentation, and upkeep of the intended design. In 1997, they added a further $8 million of restoration work . The clientele of the1990’s sought conference centre space, and it was during this time that Calgary architect’s Carruthers, Marshall and Associates took on the task of satisfying this need with a $25 million dollar renovation. Finally, in 1995, Calgary architect Robert LeBlond completed the luxurious new spa for the hotel with a budget of $12 million.

Overall, the Banff Springs exhibits many European influences, which can be seen in the decor, furnishings and interior details, but Canadian images of local Indigenous culture and regional flowers complete its identity. The Arts-and-Crafts traditions are evident, showing off French, Scottish and Spanish traditions in the various rooms. Canadian as well as European manufacturers were involved in providing the interior details, including Montreal’s Castle and Son for the wood furniture, and Czechoslovakian crystal chandelier and glass window manufacturers.