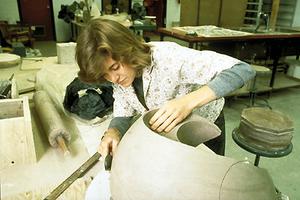 Artist at work in the ceramics studio at the Banff Centre for the Arts (photo by Monte Greenshields). 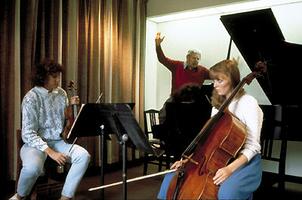 Raphael Hillyer with musicians of the advanced studies in the music program at the Banff Centre for the Arts (photo by Monte Greenshields). 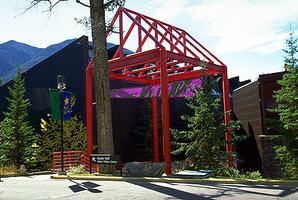 The Walter Phillips Gallery at the Banff Centre (photo by Bernard Bloom).
PreviousNext

The Banff Centre is a unique educational and cultural institution and an international conference-hosting centre, located in a magnificent mountain setting overlooking the town of Banff, Alta, in Banff National Park. It provides visual artists and performing artists with an interactive, multidisciplinary and multicultural environment dedicated to cultural leadership and creative innovation.

The Banff Centre for Continuing Education began in 1933 as a special summer program sponsored by the University of Alberta's Division of Continuing Education. From the beginning it was intended to provide cultural enrichment, in an inspiring wilderness setting, for beginners, serious amateurs and professionals in drama, music and visual fine art. It was called the Banff School of Fine Arts from 1933 to 1978, when it was officially renamed the Banff Centre for Continuing Education to emphasize its broader scope. Under the able leadership of the first 2 directors, Donald Cameron and David Leighton, this school had evolved by the 1980s into a leading international centre for continued learning. Its famous summer session was internationally acclaimed. Under Paul Fleck and president and CEO Graeme McDonald, the centre soon came to serve accomplished professionals and advanced students on an international level. Under president and CEO Mary Hofstetter, the Banff Centre is undergoing an ambitious and comprehensive renewal program and celebrated its 75th birthday in 2008.

As a catalyst of creativity with a transformative agenda, the Banff Centre blends the advantages of an inspiring wilderness atmosphere with first-rate contemporary facilities in both the visual and performing arts. Of special note are its integrated, multimedia recording and production studios. Over the years, a faculty of internationally recognized fine-arts residents and an inviting grant and scholarship endowment have ensured the participation of artists and performers of outstanding leadership potential and progressive spirit. Many of the winners of contests and scholarship competitions at the Banff Centre have gone on to forge international reputations and attract a worldwide audience.

Although diplomas are given for completion of the many different programs offered, the basic concept of education at the Banff Centre differs, through strong focus on independent research, from that found at most art schools, conservatories or university fine-arts programs. As a beacon to creative thinkers around the world, the centre has increasingly assumed that participants have already mastered the fundamentals of their discipline and are seeking an institutional catalyst for initiating new phases in their own development.

In addition to being a focal point of creative excellence in the arts, the Banff Centre operates year-round as a self-contained meeting and conference facility. With the completion of the Leighton Artists' Colony on the centre grounds, a select group of resident visiting artists have been freed to evolve new forms of artistic expression and presentation without the disruption of scheduled course, administrative or teaching commitments. In addition to an ongoing program of concerts and theatrical production open to the general public, the Walter Phillips Gallery offers an extensive yearly cycle of stimulating world-class art exhibits and installations.