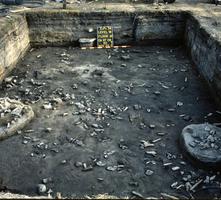 Floor plan of level 18 in the 24-metre excavation block. Numerous items are present on the floor including quantities of butchered bison bones and assorted stones (courtesy Thomas Head).

Late Prehistoric Old Women's style points from the Balzac Site. The labeling system provides information on the excavation block (1 or 2, first number in the sequence) and occupation (2 to 7). For example, the number 1-5 indicates the 40-metre excavation block, occupation 5. The occupations are numbered sequentially from the surface in the order they were excavated from most recent to oldest. The point 2-2 is a fragmentary metal trade point from the 24 metre excavation (courtesy Thomas Head). 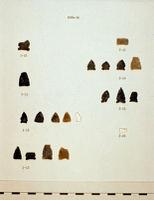 Avonlea style Late Prehistoric arrow points from the Balzac Site. Item 1-10 is from the 40 metre excavation block, occupation 10 while 2-12 is an unnotched base from the 24 metre excavation block and the 12th occupation. Avonlea points tend to be smaller than the later Old Women's style points. Note the two clear items from 1-12 and 2-20 that are made of quartz crystal. A scale at the bottom of the photo is in 1-cm increments (courtesy Thomas Head). 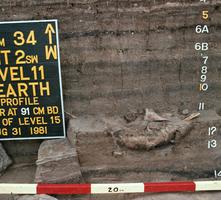 Partial wall profile of the 40-metre excavation block with the cultural horizons identified with numerals. A partially excavated basin shaped hearth is present in level 11. The hearth is about 35 to 40 cm in diameter (courtesy Thomas Head). 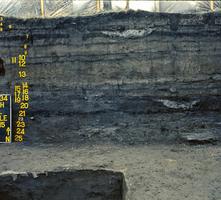 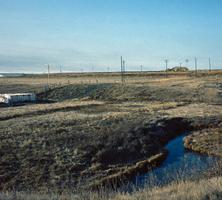 The Balzac Archaeological site (Borden No. EhPm-34) is a late prehistoric camp and bison-processing site that was occupied from ca 2000 Before Present (BP) to 1850 AD. It sits astride the north branch of Nose Creek about 16 km north of its confluence with the Bow River and adjacent to the north side of the City of Calgary. Nose Creek is underfit (ie, too small to have eroded the valley it occupies) and incised into bedrock within a glacial spillway that drains upland areas to the north and west of the city. The site is divided into five areas (A through E) as defined within the bedrock controlled spillway and separated by the "S" shaped meanders of Nose Creek that are incised into the bottom of the spillway. Repeated flooding of Nose Creek over the last two millennia has resulted in a stratified depositional environment with associated multiple periods of use by First Nations in lower portions of the site.

The site was identified in 1978 in advance of pipeline work and revisited in 1980 in advance of a second pipeline. Of particular interest is the work carried out between 1981 and 1982 that included the excavation of two blocks of 40 and 24 square metres. Within each of these blocks are a series of cultural components associated with flood related sediments occurring at 175 to 200 year intervals.

A direct correlation between the sediments in the two blocks is not possible but they are generally comparable with greater separation in the smaller and more southerly block. Within the larger block (80 cm in depth), 13 components were defined, four of which contained Avonlea projectile points (ca 1750 to 1100 BP) and three which contained Old Women's style projectile points (ca 1100 to 250 BP). Both Avonlea and Old Women's points are small triangular arrow points with or without side notches. Avonlea style points are typically finely made and the side notches, if present, are small. The Old Women's style points tend to be somewhat larger and less finely made. Side notches are typically larger and show greater variation in size and shape than Avonlea style notches.

Within the smaller block, sediments were almost half again as deep (120 cm) as those in the larger block allowing for greater separation and definition of the components. Fifteen components were identified, including Avonlea and Old Women's style projectile points as well as a metal point in the upper most (and most recent) component. Eight radiocarbon dates are consistent with the periods defined by the point styles.

Over 70 000 pieces of cultural material were recovered during the two seasons of work, the majority of which are bison faunal materials associated with campsite and bison processing activities. Also present were multiple lithic items, an assemblage of stone and bone tools, a small collection of ceramics and a number of features. Cultural remains are almost twice as common (on an item per square metre) within the smaller block even though it is only 60% the size of the larger block.

The stone tools assemblage included 539 items of which 60 are Old Women's style points and 41 are Avonlea style points. Also present are other tool types including bifaces, scrapers and retouched flakes. The lithic assemblage is dominated by local materials but non-local materials are also present. Of note is the use of obsidian in Old Women's occupations and quartz crystal in Avonlea occupations. Ceramics are more common in the Old Women's occupations and those materials associated with Avonlea occupations may be intrusive. Basin shaped hearths are the most common feature but a small number of pits were present. Seventy-two bone tools were identified, with portions of three broken medapodial toothed fleshers recovered from separate Avonlea occupations in the small block.

The faunal analysis (see Zooarchaeology) focused on speciation, gender analysis, aging and a butchering analysis. The assemblage is dominated by bison but large canids (wolf or domesticate dog), small canids, badger and small rodents were present. Within the bison assemblage a minimum of 96 animals were identified using dentition, element counts and gender defining elements. The dentition suggests that various aged animals were killed in the late winter (February/March) and this is consistent with the faunal assemblage that includes a number of late term fetuses (the females give birth in the spring). Gender defining elements (fused long bones) suggest that cows outnumber bulls by two to one, an observation consistent with a cow/calf herd that would include a number of fetuses. The butchering analysis is consistent with what is expected of a campsite. The bison were probably killed and partially butchered slightly north of the site, as suggested by the quantities of larger bones found within the creek. A small jump was possibly used for the bison hunt, along with the bow and arrow, which was the main weapon system used during the late prehistoric period.

Significance of the Balzac Archaeological Site

Balzac is comparable to a number of late prehistoric campsites in Alberta. These include Hartell Creek, Cattle Baron, DkPi-2, Kenney and Saamis. However, Balzac contains one of the best stratigraphic records of use and reuse of the Alberta Plains in the late winter/early spring. It also provides a picture of a portion of the seasonal round of activities as First Nation groups moved out of the sheltered main river valleys to focus on the cow/calf herds to acquire meat and hides. The excellent stratigraphic separation at Balzac allows for a fine resolution of cultural questions including site location, seasonality and dietary considerations and as such, the site is one of the most important late prehistoric campsites in the area.