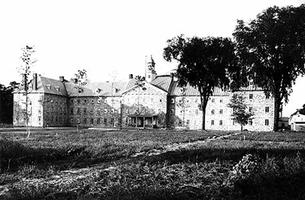 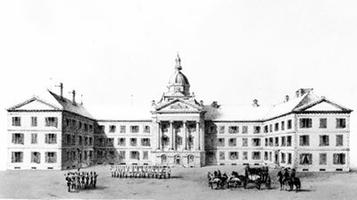 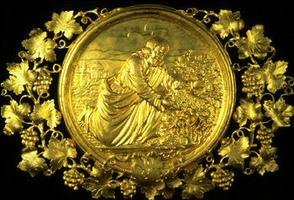 François Baillairgé, circa 1775, guilded and painted wood sculpture. Baillairgé was one of 5 generations of the Baillairgé family active in the arts (photo by Patrick Altman/courtesy Musée du Québec).
PreviousNext

Baillairgé Family, architects, sculptors and painters active in Québec for 5 generations until well into the 20th century, the most prominent of whom are Jean, François, Thomas and Charles.

Master carpenter, sculptor, joiner, architect (bap at Blanzay, France 31 Oct 1726; d at Québec City and buried 6 Sept 1805). Brought to New France in 1741 by Bishop Pontbriand, Jean Baillairgé possessed technical competence in carpentry and joinery as well as a rudimentary grasp of French academic classicism. For 60 years he executed and occasionally designed woodwork for shops, houses, and public and religious buildings.

Of particular note was the interior sculpture for churches in and around Québec, especially the pulpit, churchwardens' pew and steeple (1768) and retable (1786-93, with his son) for Notre-Dame cathedral in Québec. A man "stern in matters of religion, duty and authority" but "cheerful in character," he fought in the militia of New France in 1759 and with the British garrison against the American invasion in 1775-76. He fostered a love of the building arts among his contemporaries and founded a dynasty of architects, sculptors and painters.

Sculptor, architect, painter, city treasurer (b at Québec City 21 Jan 1759; d there 15 Sept 1830). François Baillairgé surpassed his father Jean in the quality of his craftsmanship, especially in ornamental sculpture. At a time when Québec was cut off from the mother country, he renewed contact with the French classical principles of the Louis XVI period. Recognizing François's talents early, Jean and the Séminaire de Québec sent him to study in Paris 1778-81 at the Académie royale de peinture et de sculpture.

On his return, François produced altarpieces and retables for many parish churches as well as large religious canvases, ships' figureheads and fanciful works such as the coat of arms for the duke of Kent's carriage. Working first with his father and later with his son, François excelled in the design and execution of richly carved and classically inspired church interiors. Among the best are those at L'Islet (1782-86), St-Ambroise-de-la Jeune-Lorette (1810-16), St-Joachim at Montmorency (begun in 1816) and Baie-St-Paul (1818-28). To François can be attributed the introduction of the baldachin and the Louis XVI domed tabernacle to Québec altarpieces.

His academic training is evident in the classes he offered in painting, sculpture and mathematics, as well as his application of theoretical knowledge found in the architectural treatises he had purchased in France. He consciously used principles from the 1568 book by Philibert de L'Orme, that French interpreter of Italian Renaissance taste, in his solutions for the tabernacle of Notre-Dame cathedral in Québec and the façade of the Québec prison (1808-14). With his son Thomas and Abbé Jérôme Demers, François Baillairgé set the stage for the full flowering of Québec academic neoclassicism.

Architect, sculptor, painter (b at Québec City 20 Dec 1791; d there 9 Feb 1859). Thomas drew on the architectural inheritance of his father François and grandfather Jean to bring the architecture of the Québec church to its most perfect form. His practice witnessed the gradual shift from execution to design. He collaborated closely with Abbé Jérôme Demers, who attempted to set down the rules and guidelines for architectural design and practice in his Précis d'architecture (1828). This course outline on architecture, supplemented by Thomas's plates and carved models of the classical orders, is the first architectural treatise written in Canada.

Thomas Baillairgé synthesized his Renaissance inheritance with a blend of French and English neoclassicism to produce a series of harmonious and monumental church designs. Both the striking 3-dimensional interior at St-Joachim in Montmorency (1816-29) and the twin-towered churches exemplified by the façade design for Notre-Dame cathedral in Québec (1843), Ste-Geneviève de Pierrefonds (1844) and St-Roch-de Québec (1845) reveal his ability to capture the spirit of classicism by the rigorous integration of all design elements into a unified ensemble.

True to family tradition, he maintained a professional practice, training apprentices in architecture and sculpture and certifying their competency after 3 years' practical work, formal classes and reading in his splendid library. An affable, music-loving bachelor, he often entertained the French Canadian elite at social evenings where discussions ranged from politics to science and history. The greatest church architect of French Canada, he influenced religious architecture for almost a century.

Architect, civil engineer, surveyor, mathematician, inventor, writer (b at Québec City 29 Sept 1826; d there 10 May 1906). Member of the fourth generation of this architectural dynasty, he broke with the classical tradition of his forebears to become an eclectic designer well versed in the technological changes and stylistic diversity of his own era. Apprenticed to his father's cousin Thomas, Charles qualified as an architect, civil engineer and provincial land surveyor by age 22.

The transition from craftsman to designer was then complete, for Charles, unlike the previous Baillairgés, did not execute his own work. An ambitious and intellectually curious individual, he quickly put aside the neoclassicism of his mentor to produce unusual and innovative buildings. Two of the earliest, a Gothic revival chapel with triple balconies for the Sisters of Charity (1850-54) and the Bilodeau shop with 8 m high Doric columns and interior floating mezzanine (1849-50), startled architecturally conservative Québec.

During the 1850s he secured important commissions including the Québec Music Hall (1851-53), Université Laval (1854-57), the church at Ste-Marie-de-Beauce (1854-60) and the Québec prison (1860-63). Such was his reputation that he was called to Ottawa in 1863 to supervise the Parliament Buildings and departmental buildings. His private ambition to transform his appointment as associate architect into the position of chief architect of public works was ruined by the corruption that he encountered at Ottawa. Instructed to prepare evidence against the contractors, Charles was abruptly dismissed so that his testimony could not be heard. He returned to Québec City, where he replaced his father as city engineer, a post he occupied 1866-98.

An avid reader, Charles Baillairgé augmented François's and Thomas's architectural library by collecting a wide variety of books from England, France, Belgium and the US. He himself wrote extensively in both English and French on architecture, engineering, language and mathematics. His Stereometrical Tableau, a mathematical formula for measuring volumes, won him international recognition.

His love of study and his mechanical bent of mind led him to invent a steam-propelled automobile at age 17, an electro-chromatic rotating fountain and an iron Eiffel Tower for London. Restless and hardworking, Charles Baillairgé designed over 180 buildings, wrote more than 250 books and articles, and fathered 20 children. His son William-Duval succeeded him as city engineer, thereby extending the family's influence on the Québec building scene to the fifth generation.