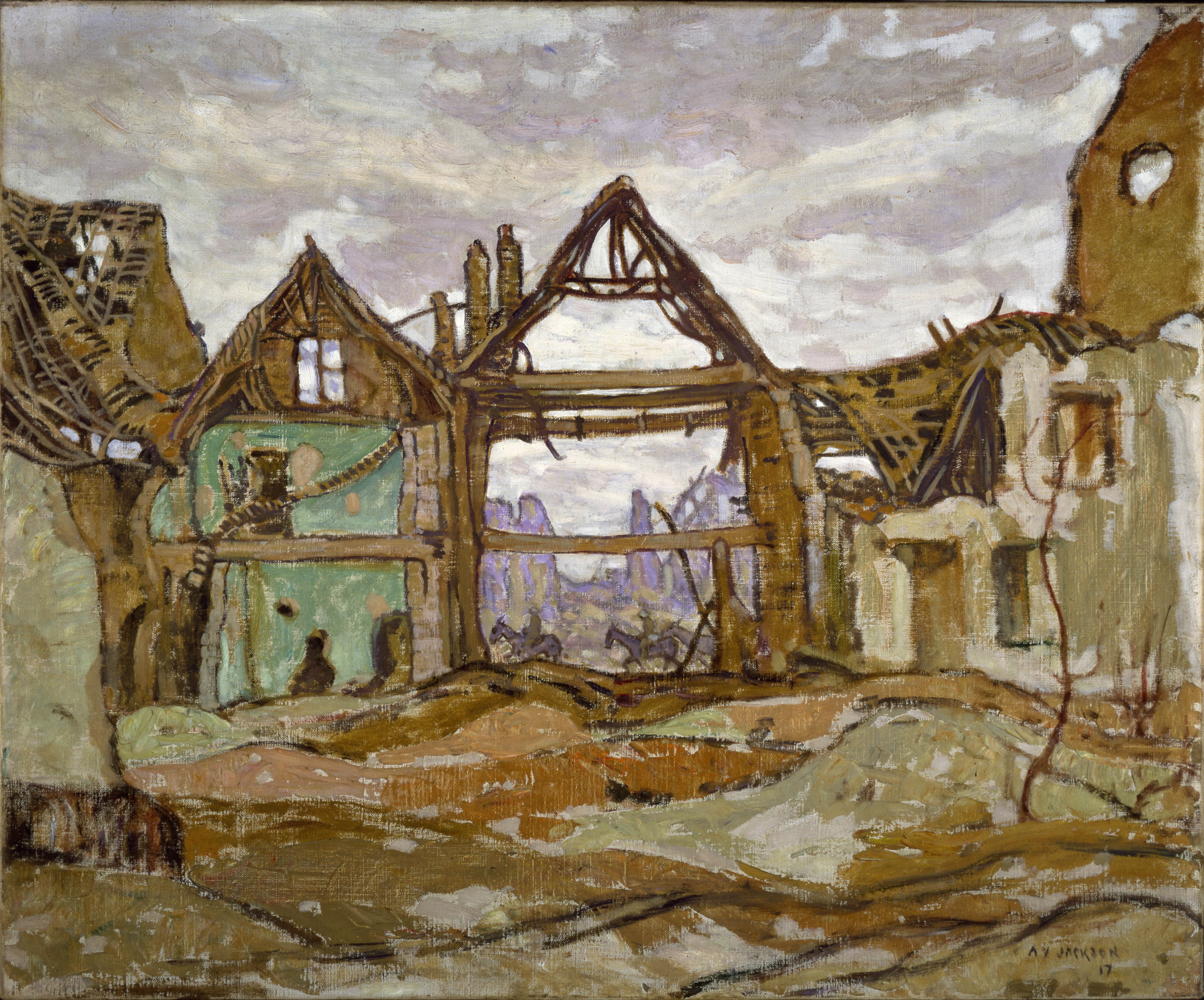 The landscapes of Tom Thomson, and those of the artists who became known as the Group of Seven— Franklin Carmichael, Lawren Harris, A.Y. Jackson, Franz Johnston, J.E.H. MacDonald and Frederick Varley — were, from the very beginning, markedly different. Working from sketches made during extended trips to Georgian Bay and Northern Ontario, these artists were in search of a pictorial idiom tailored to the Canadian experience. They depicted the Canadian landscape as intensely physical and even volatile. It was subject to snow and wind and rain and fire, and not always welcoming to people. They were also acutely aware of the impact that humans have had on the natural world. That consciousness grew deeper, and more tragic, for those who had direct experience with trench warfare during the First World War.

The two Group of Seven artists whose work was most intensely affected by their experiences in the Great War were A.Y. Jackson and Frederick Varley. Jackson was initially contemptuous of the jingoism that accompanied armies of young men marching off to war. But by June 1915, Jackson had joined the 60th Infantry Battalion, Victoria Rifles of Canada, mere weeks after the devastating German gas attacks during the Second Battle of Ypres. Jackson was eventually deployed to France. He participated in the Battle of Mount Sorrel, a costly conflict that resulted in more than 8,000 Canadian casualties. Jackson was among the wounded. 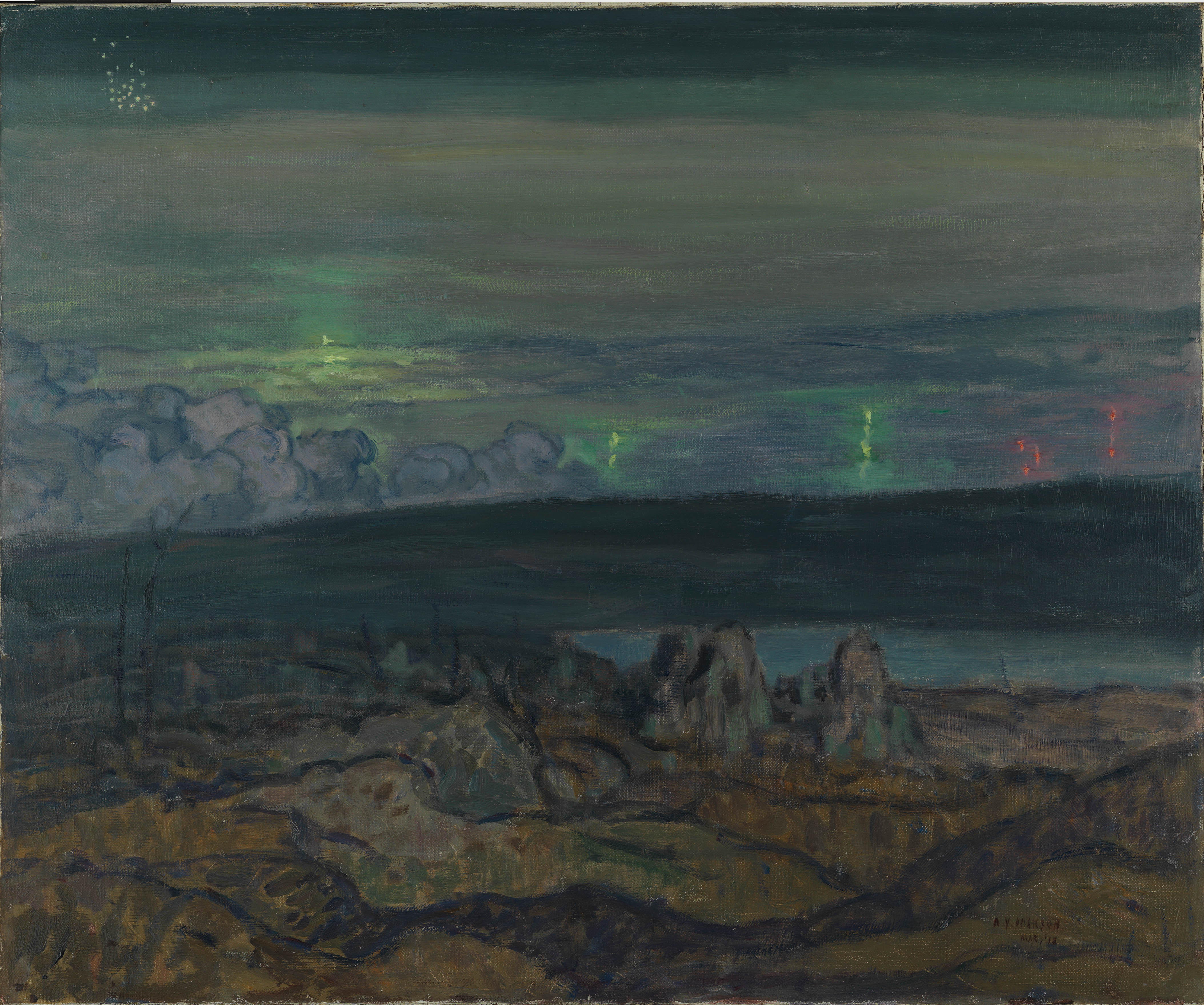 Jackson’s harrowing Gas Attack, Liévin (1918) depicts a blasted landscape. The few trees that remain are reduced to thin, charred trunks. The mud is churned and a water-filled bomb crater stands in the middle ground. On the horizon, blue clouds of gas billow where shells burst red and yellow like fireworks. Jackson’s earlier Houses of Ypres (1917) shows collapsed and gutted buildings through which one can see soldiers passing on horseback, soft purple ruins behind them.

Jackson’s work was always influenced by Vincent Van Gogh — the thick, sensuous way he applies paint, the curving, organic forms, the dense, swarming compositions. But his war paintings are hardly vaulting hallucinations. While attuned to the beauty of destruction, they embody a dark and cruel reality. For Jackson, there are no war heroes, only darkness, ruin and desolation. 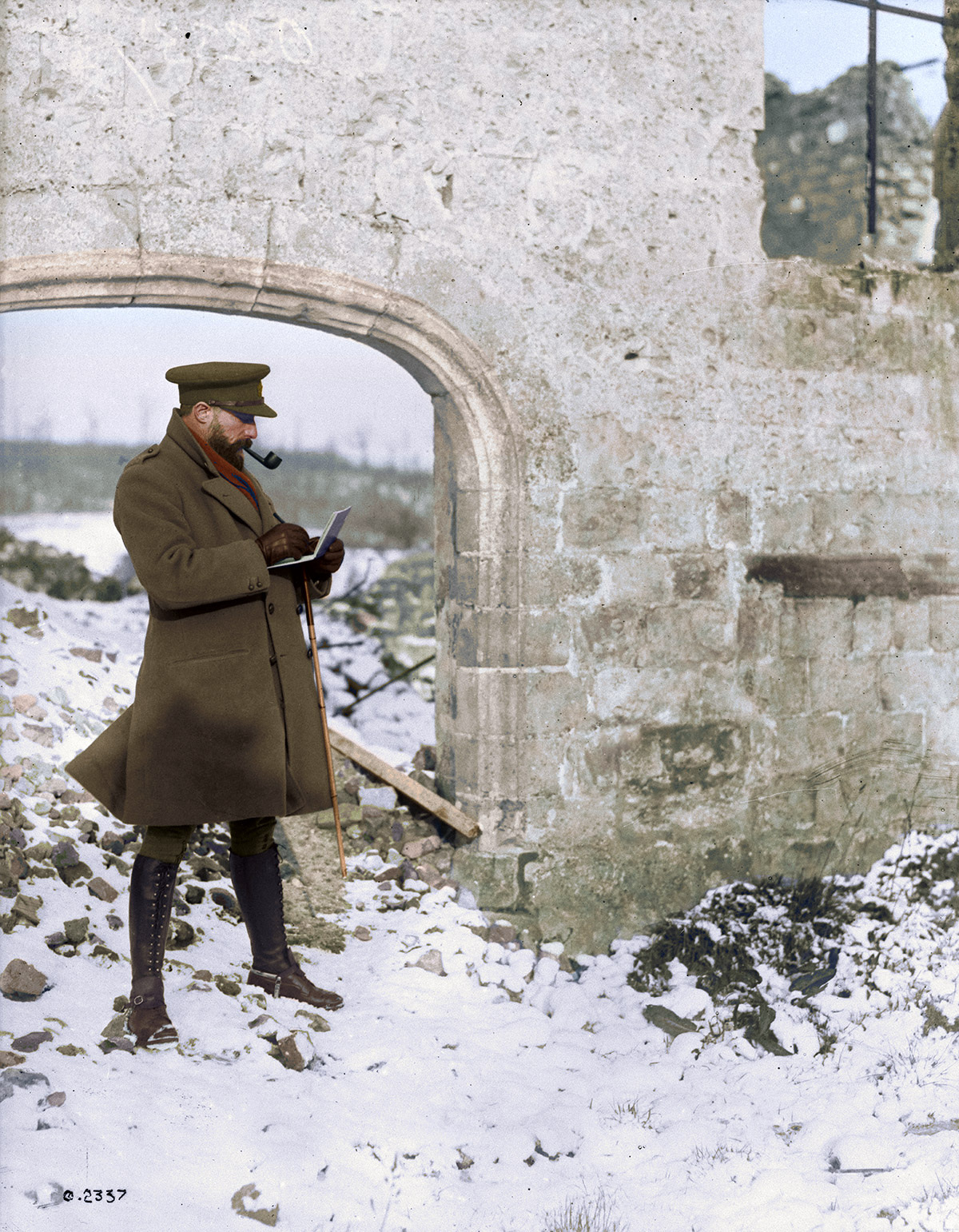 Jackson was moved by the war’s endless carnage and the rising cost in Canadian lives. He enlisted early, served in some of the war’s most iconic battles and was ultimately wounded. Frederick Varley, on the other hand, did not arrive in Europe until 1918. When he did, it was with a captain’s salary and a monthly allowance for art supplies. He lingered in London for months in considerable luxury, taking in the latest in modern art. Designated as an official war artist — at the behest of Lord Beaverbrook — Varley followed Canadian troops in the Hundred Days Offensive through France and Belgium. He witnessed plenty of combat along the way. 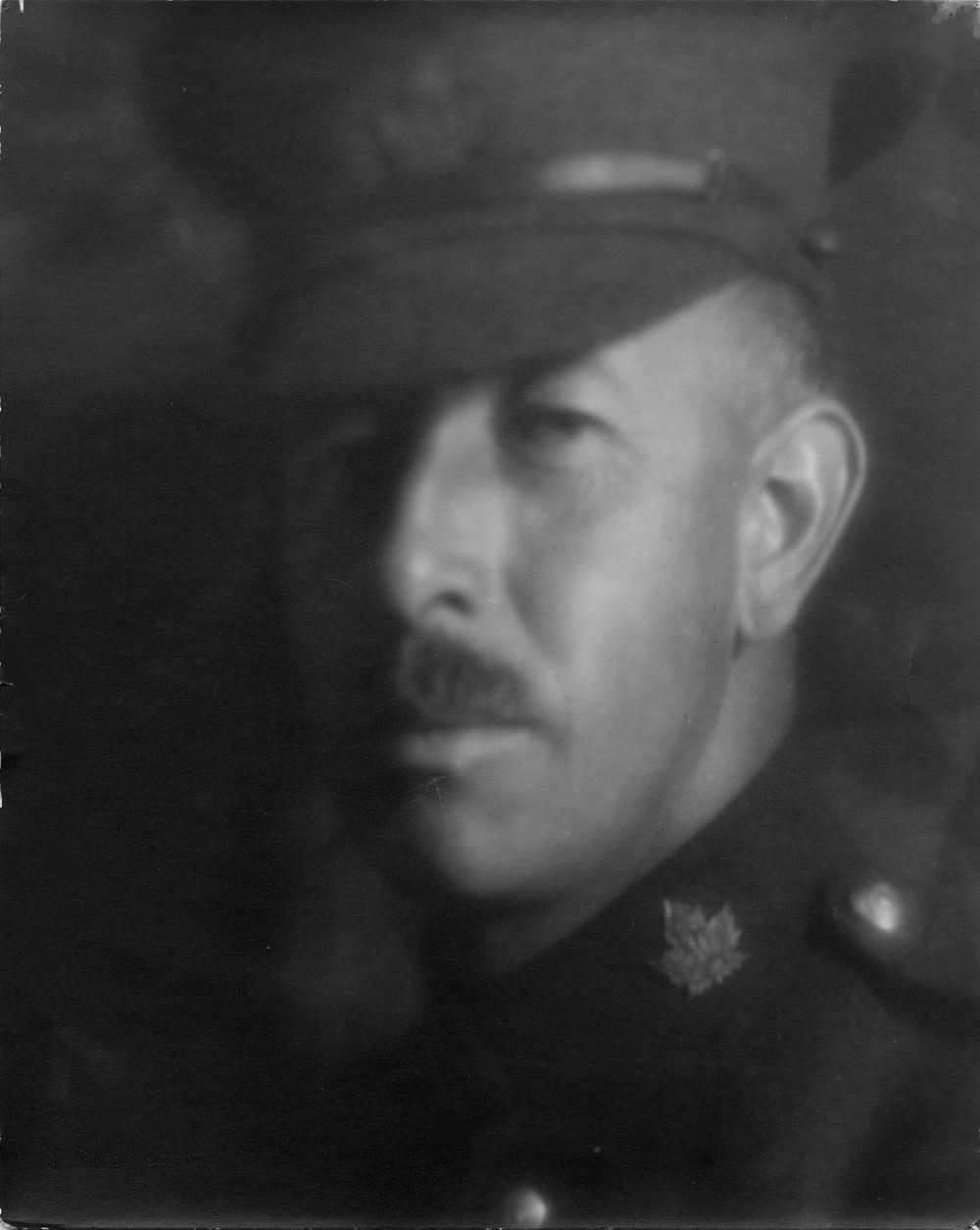 Varley’s war paintings were expansive, even panoramic. In For What? (1917–19), a man stands before rows of white crosses on a broad, flat plain, an upended cart heaped with bodies in the foreground. The sky on the horizon is a sickly yellow, the low smear of clouds streaking rain. In Some Day the People Will Return (1918), the foreground is congested with rubble and crosses, the horizon black with clouds.

Varley regarded the war as craven, hopeless and utterly absurd. “You in Canada… cannot realize at all what war is like,” he wrote his wife Maud from the front. “You must see and live it. You must see the barren deserts war has made of once fertile country… see the turned up graves, see the dead on the field, freakishly mutilated — headless, legless, stomachless, a perfect body and a passive face and a broken empty skull — see your own countrymen, unidentified, thrown in a cart, their coats over them, boys digging a grave in a land of yellow slimy mud and green pools of water under a weeping sky.” 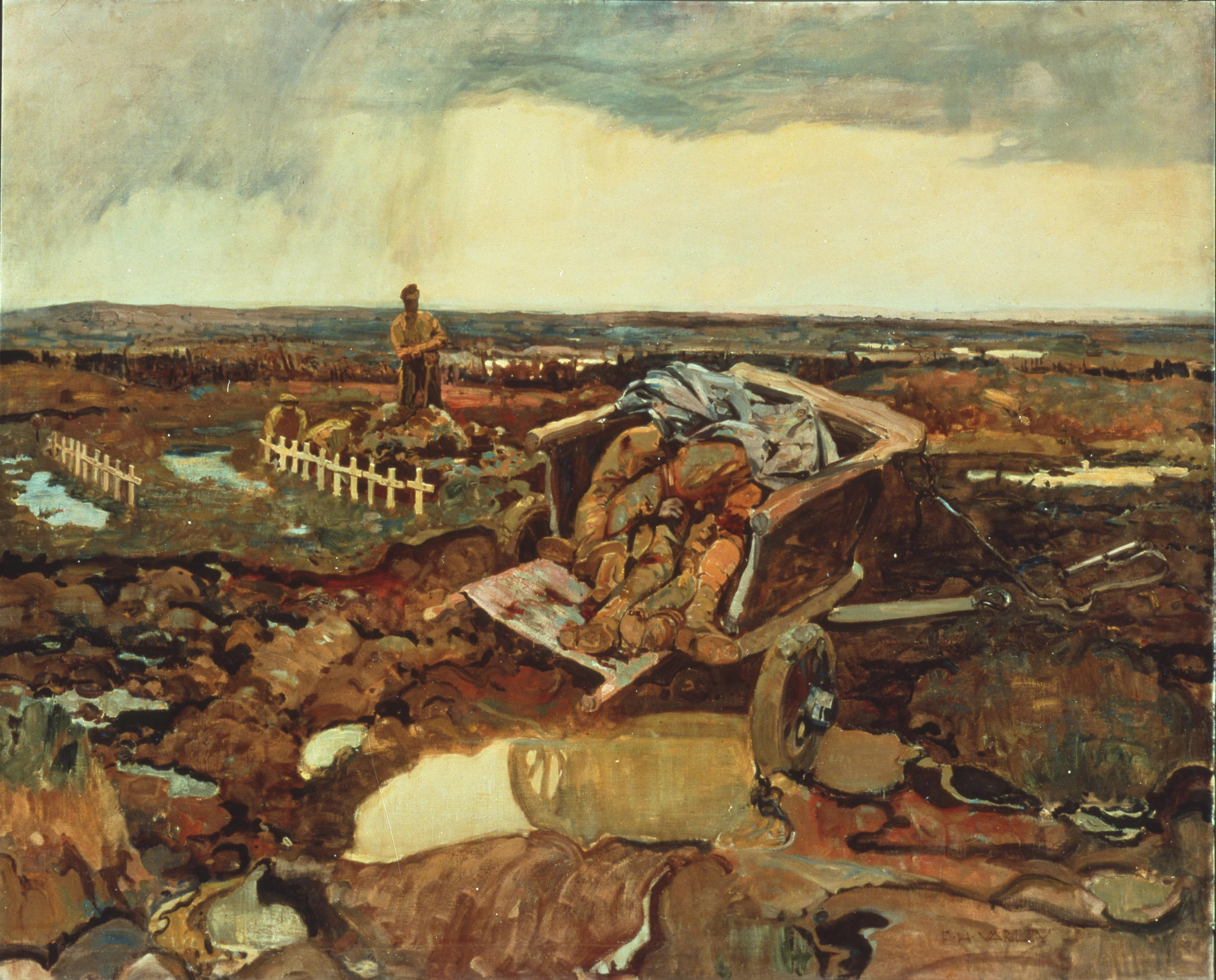 The collective experience of the First World War stripped Canadian art of whatever vestiges of romanticism that might have held over from the 19th century. It is difficult to look at the work created in the traumatized and chaotic wake of the war without seeing it through the conflict’s blood-stained lens. Jackson’s First Snow Algoma (1919–20), depicting the site of many uplifting pre-war paintings and sketches, has spots of snow swirling down over woods that look like they are ablaze beneath a smoky, menacing, cloud-filled sky. In Varley’s Stormy Weather, Georgian Bay (1921) — another familiar Group of Seven haunt during happier, pre-war days — the wind, churning the lake water to a froth, tears the pine trees to shreds. And in Franz Johnston’s Fire Swept, Algoma (1920), all that is left of a hillside wood are denuded tree trunks.

In these paintings, the demons of war — blind, anarchic and inhuman — seem to have been transferred to the processes of the natural world.