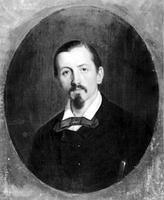 Antoine Dessane (portrait by Théophile Hamel courtesy Musée du Québec). The music is an excerpt from his Ouverture of 1863 with the Orchestre Métropolitain, Gilles Auger conducting (courtesy CBC).

(Marie Hippolyte) Antoine (Antonin) Dessane. Organist, pianist, cellist, teacher, composer, b Forcalquier, near Aix-en-Provence, France, 9 Dec 1826, d Quebec City 8 Jun 1873. He was the second son of Louis Dessane, the author of a theory of music approved by Luigi Cherubini, and Marie Maurel, who came from a family of soldiers. Antoine's elder brother was his first teacher of composition. Another brother was to become the organist at St-Sulpice in Paris. Until 1837, Antoine received his musical education from his family. His father, who had been teaching since 1828 at the Jesuit college in Billom, in Auvergne, imposed a strict discipline on his son: at nine he was studying music nine hours a day. In 1837 the family left the Auvergne to live in Paris and a few months after his 10th birthday, he became one of the youngest students at the Paris Cons and was one of the few who became the favourites of its formidable director, Luigi Cherubini. Among his fellow students were César Franck and Jacques Offenbach. Dessane won two competitions at the conservatoire, one in cello and one in piano.

Despite this, his father withdrew Antoine from the conservatoire in October 1841 and took him and his older brother on a concert tour to promote his music business, first to the USA, and then to the French provinces, Italy, Austria, and Germany. The tour lasted a year and a half; the musicians gave concerts in many towns and several castles, including those of the duchesses of Angoulême and Berry and of the prince of Polignac. On their return Antoine taught for a year at Billom with his father. He settled in Clermont-Ferrand in 1845 and completed his musical education there with the composer George Onslow. During the next two years he discovered the fascination of composition and absorbed as much as he could of the musical heritage of the Western world. In addition, he gave lessons at several institutions and households. One of his pupils, Irma Trunel de la Croix-Nord (1828 - 99), became his wife in 1847, a few months before the revolution of 1848. The necessities of life were rationed, and France was unable to support her artists, especially in the provinces. It was at this time that Dessane accepted the offer to succeed T.F. Molt as the organist of Notre-Dame Basilica in Quebec City.

Dessane landed at Quebec with his wife and daughter in July 1849. Finding that the people there shared their language and religion, and deeply impressed by the city's beauty, the Dessanes integrated quickly into a milieu steeped in cultural pursuits. At first the family settled on the outskirts of the city on the Chemin-de-la-Petite-Rivière on the west of the St-Charles Cemetery. It was during a fishing excursion on the St-Charles River that Dessane heard some folk songs which were to inspire his Quadrille sur cinq airs canadiens. In 1850 the Dessanes gave a concert with the 79th regiment and a German violinist, Sigismond Pfeiffer. Irma Dessane sang songs by Meyerbeer, Adam, and Hippolyte Monpou. Dessane played cello and piano and presented a work of his own, La Québécoise, 'as a tribute to the ladies of Quebec'.

This concert marked the beginning of an active musical career in which, no doubt because of the vocal talents of Irma Dessane, opera was to play a large part. In 1852-3 the family moved to St-Vallier Street. This more central location made it possible to offer music lessons, which soon became popular among the middle-class families with which the Dessanes associated. The courses were supplemented by musical soirées. These 'Soirées Dessane' later were held in the Knights of Columbus hall, which contained 1000 to 1200 seats, where plays were also presented. The musicians who participated in these Soirées were for the most part members of the Société harmonique, and Dessane conducted some of their concerts, including those on 22 Feb and 19 Mar 1853 : works by Mozart, Haydn, Beethoven and Weber were performed. He conducted a few others before the Society disbanded in 1857. In 1870, Dessane and Frederick W. Mills attempted to revive it.

In 1857 Dessane had formed the Septett Club, a string and wind ensemble which gave its first concert 27 Apr of that year and flourished until 1871. The club performed classical and romantic music which before that time in Quebec had been heard only in arrangements for military band. The septet resorted to arrangements, too, but these attempted to approximate more closely the original works. The ensemble gave its concerts alone or with church choirs; in the latter case the program would consist mainly of religious music, and works by Dessane often would be sung by his wife. A disagreement between Ernest Gagnon and Dessane on the accompaniment to plainsong, stirred up by the publication of P.-M. Lagacé's Chants d'Église, led to Dessane's resignation in 1864 as organist at Notre-Dame. He put forward his point of view in the Journal de Québec on 3 Apr 1864. He continued his teaching and concerts, however, and formed a 60-piece orchestra, recruiting the members mainly from the regimental bands. In 1863 Dessane wrote two overtures for full orchestra.

In August 1865 the family moved to New York, where the Jesuits had offered Dessane the position of organist at St Francis Xavier Church. Even though this new post was attractive financially to the musician, who now had seven children, his four-year stay in the US metropolis was rather unhappy. Moreover, Dessane's health by then was impaired. He nevertheless continued to put on concerts, especially of religious music with soloists, choir, and orchestra. On 7 Feb 1866 he performed his Messe solennelle in D minor at St Francis Xavier Church, with the aid of his wife, three other singers, the church choir, and an orchestra of 60. Between January and April 1868 in Steinway Hall he presented six concerts with five singers, two pianists, and a string quartet. The programs contained some of his own works. In 1869 he completed a manual on orchestration which has remained unpublished. The same year Damis Paul left St-Roch Church in Quebec City, where he had been organist for 18 years. Through the influence of his friends Adolphe Hamel and Nazaire LeVasseur Dessane obtained the post and took up his new duties 1 Nov 1869. In December he founded the choir known as the Société musicale Ste-Cécile.

In 1870 Dessane directed his efforts towards establishing a conservatory modelled on the one in Paris. Besides classes in piano, organ, singing, and theory, he planned to form an orchestra which would rehearse twice a week. An inaugural concert took place on 28 Jun 1871, but the classes scheduled to begin 3 November had to be cancelled. Dessane's health steadily worsened; in the spring of 1872 LeVasseur was obliged to replace him both as the organist of St-Roch and as the director of the Société Ste-Cécile. On 1 Jun 1873 Dessane was able to play at the Offertory of the mass, but a week later he died in his home on St-Jean Street.

Antoine Dessane had taught at the Höpital général, and at the Collège Jésus-Marie, and privately. The majority of his scores, particularly those in manuscript, are held in the archives of the Séminaire de Québec and of Laval University. The most important collection was given to Laval University by Paul-Marcel Dessane. This collection of 61 works, 11 of which are incomplete, consists of masses and hymns, a few with orchestral accompaniment, some chamber music, melodies, quadrilles, polkas or marches for the piano. Among these works, are a five-part Fantaisie-Sonate for flute and string quintet and a secular Cantata for four soloists and unaccompanied choir which celebrates the coming of summer and holidays; the fourth movement of this cantata is a waltz for soprano with piano accompaniment. Le Chant des voyageurs, composed in 1862 on a text by Crémazie, is possibly the first 'cageux' or coureur des bois song composed here. In April 1984 the orchestra and choir of the École de musique of Laval University, conducted by Chantal Masson performed the Mass in E Flat at the chapel of the Petit Séminaire; the lyrical quality of this work shows how closely related Dessane was to Gounod.

Several of Dessane's children also had careers in music. Léon (b Quebec 15 Dec 1863, d there 7 May 1930), a pupil of Calixa Lavallée, was organist at St-Roch for 33 years. He was choirmaster at Manrèse, a Jesuit retreat house in Quebec City, founded the Gounod Quartet and the Dessane Choir, and conducted several of his father's works. He was a music teacher in Quebec City and president of the AMQ 1923-6. CMH (vol 4a) published his Trios dans tous les tons for organ, the authenticity of which remains doubtful. Irma and Antonia Dessane were singers, as was Nancy (whose son, Paul-G. Ouimet, was to become a music critic). Marie was in charge of music at the Jésus-Marie Convent in Sillery. After the father's death, teaching continued in the Dessane household. On the French side, a descendant, Albert Dessane, a pupil of Paul Loyonnet, pursued a career as a pianist in France about 1950.

Instrumental Music
Most of the scores of these works are deposited in the University of Laval archives and /or in the library of the Sémaire du Québec.

Other works for piano, for organ, for violin and piano, for violoncello and piano, and for orch. He may also have composed a Symphony in C before 1858)